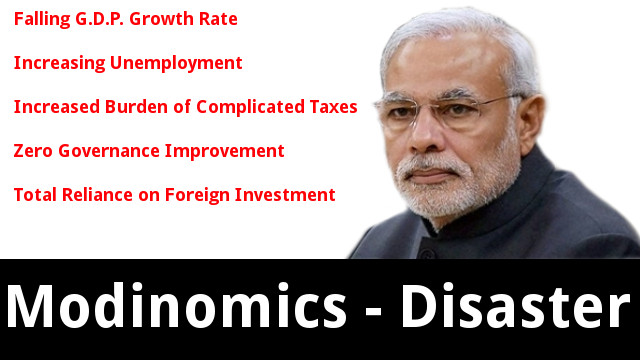 Finally Narendra Modi accepted that the Indian economy is going through bad times during his tenure, though denying that his government is responsible for the major mismanagement of macroeconomic factors; rather as a truly devoted Sanghi prostelyser, Modi blamed the critics for being pessimists, of suffering the Shalya syndrome (a pessimist chariot driver of Mahabharata character Karna, whose pessimism used to confuse his master) and accused them of spreading confusion among the people. For the first time, it seems, Modi did enough homework before coming to the 50th anniversary of the Institute of Company Secretaries, where he showed the graphs, from selective data, to drive home his point that the Indian economy is doing better than the UPA times and that while he is not an economist, the Indian economy suffered under the rule of an economist like Dr Manmohan Singh. By citing the high current account deficits during the UPA period or by showing the fall in the economic growth rate, Modi kept reiterating that there could have been no better government with a realistic economic vision than his regime.

A close analysis of Narendra Modi’s maiden data-driven speech would bring out some of the fallacy that the government and the RSS-BJP combo would love to keep under the wrap. For example, Narendra Modi kept firing the salvo at the Congress Party’s UPA government for mismanaging the economy. While accusing Dr Manmohan Singh, Narendra Modi forgot that he begged for votes with a promise to take the country towards a new dawn of economic development and with the assurance of bringing the best days in the lives of the people, which would have, according to him, transformed the country into a new one. If he was to seek refuge in Manmohan Singh and blame the previous government for being poorer than his own, then he must be reminded that it’s his duty to ensure that the economy gets better every day and is not compared with the growth of the yesteryears when a separate yardstick was used to match the growth of the GDP.

Coming to the falling growth rate of the GDP, which reached 5.7 percent in the last quarter, the lowest in three years, Narendra Modi accused the opposition of slamming him for changing the computing standards of GDP growth soon after coming to power to hype growth, while remaining silent about the same new standards during the period of crisis. Through this self-contradictory claim he made a suicidal move, which overshadowed his data, or it will be appropriate to say carefully selected data, as by blaming the computing methodology he either conceded that the growth figures initially were goofed up or he signalled that the crisis of the economy may be worse than what’s shown by economists. This contradictory statement, which actually raises questions about the government’s intentions and practices, has placed the Modi government at the receiving end, as his claims and marketing plan shows nothing more than the fact that the Indian economy didn’t develop at all, but its condition worsened due to the unapologetic corporate appeasement by Narendra Modi and his coterie, due to the notorious demonetisation exercise and the GST rollout that threatened the existence of the small and middle traders. It’s not that everyone suffered under the Modi government, Ambani and other capitalists are watching their wealth grow incessantly at a time when the real income of the Indian people are falling and their inability to spend more on consumption is causing a distress for industries, which is again resulting in large-scale layoffs from most trades.

Railway Minister Piyush Goyal, who is working as the chief defender of the government since Arun Jaitley is unable to face the press or the opposition due to the immense attack he is facing from even within the BJP for his mismanagement of the economy, came out in support of the large-scale layoffs, calling them a positive thing as it helps laid-off workers and employees to become successful entrepreneurs. Without supporting his claim with any data, he may have been pointing towards those millions of Indian youth who got loans under the Mudra scheme, on an average ₹11,000 to start a business! Or probably by successful entrepreneurship Mr Goyal was citing the example of Jay Amitbhai Shah, the son of BJP President Amit Shah, who according to the investigative report published by TheWire.in saw his company’s turnover suddenly increasing from ₹50,000 to ₹80 crores soon after Narendra Modi became the country’s prime minister and Amit Shah became the head of the party. Whatever he meant, his comments became not less pathetic than the articles published in the RSS unofficial mouthpiece Swarajya Magazine that defends the tragic economic disasters initiated or hastened by the Modi government. It’s a signal that the Modi government is more keen to see rhetoric replace actual work in fixing the economy and making India an egalitarian society.

As Modi and his ministers are continuously defending the present stage of the economy and calling the critics of the economy pessimists, there remains no hope that the downsliding economy can actually recover and get out of the abyss it’s thrown in. Modi government may have provided few reliefs to a handful of traders in Gujarat before the crucial state election, but these reliefs will not help the majority of the people and will not be able to reverse the damages set by the GST roll out and the demonetisation exercise. It’s only by bringing forth a set of new and revolutionary economic policies that the Indian people can be provided actual relief from the problematic state they are living in and to reach that realm of real economic freedom the people have to struggle against the fascist government and its corporate appeasement policies and resist all efforts by the government to damage their livelihood.