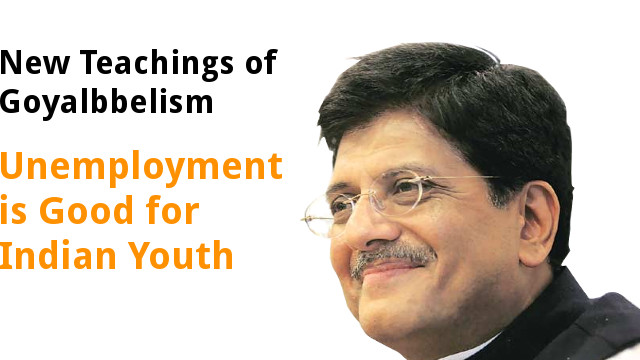 Karl Marx said, “Hegel remarks somewhere that all great world-historic facts and personages appear, so to speak, twice. He forgot to add: the first time as tragedy, the second time as farce.” He gave names of his contemporaries, while we have Piyush Goyal, a prominent BJP leader and a crucial minister in the Modi government reminding and complementing Marie Antoinette, the French queen who asked out of her sheer ignorance why the starving French people didn’t eat cakes when they starved due to an acute crisis of bread? Goyal didn’t ask anything that stupid, but in his attempt to brush off a critical remark by Bharti group’s head Sunil Mittal over the large-scale layoffs fuelled by a crisis-ridden economy, he told the audience, as well as the country, that losing jobs is good for the country’s youth as they wouldn’t be wasting their lives in jobs but will certainly become entrepreneurs. A moment that’s nearly as good as a Marie Antoinette moment for Indians.

It’s not sure whether Piyush Goyal takes interest in contraband drugs or Himalayan weed, it’s also not clear that he has an iota of knowledge about things he is asked to defend as one of the many soldiers of Narendra Modi. He blabbers, without making any sense and he, being the head of the Indian Railways, which has hundreds of thousands of positions lying vacant, especially passenger safety regarding positions, clarified that this regime has no plans to fill them and allow people employment in one of the largest public sector employers in the country and it doesn’t give a damn to the passenger safety issues in world’s largest railway network. The only thing Piyush Goyal does well is propaganda, done by peddling lies and by concealing real data. For example, if we remember that interview of Piyush Goyal on NDTV during the demonetisation exercise, where he said that he was surprised to know that Arun Jaitley concealed Modi government’s decision despite being a man who’s bad with secrets. His lies were busted in this article, which even quotes the April 2016 Times of India reports that quoted SBI study that showed that a large section of the stock-brokers, money lenders, land brokers and other unscrupulous elements also knew about the demonetisation exercise and did a lot of cash transactions at that time to avoid future inconvenience.

Jahnavi Sen recently lambasted the claim of Piyush Goyal that those who are losing their jobs due to the economic recession are leaping into the foray of entrepreneurship by opening start-up enterprises. Piyush Goyal didn’t provide any data to back up his claim and he also didn’t inform where these laid-off people are getting their initial capital from. If it’s from the Mudra scheme, as claimed by Amit Shah earlier, then it must be kept in mind that former finance minister and BJP’s disgruntled leader Yashwant Sinha recently dismissed that claim and showed by citing the government’s data that the average amount of loan given under this much-hyped scheme is something around ₹11,000, which cannot even be used to open up a Pan/betel leave stall in a village. Demonetisation has already affected the economy and the GST rollout caused a chaos, followed by the sudden hike in fuel taxes; under such circumstances, fantasizing that the laid-off employees from most of the sectors are now not seeking employment but are interested in starting their own start-ups in a volatile economic environment is a cruel joke. Piyush Goyal can afford such a joke because being an advocate of the Modi government, it’s his responsibility to shield the government from the criticism of the public. Just like Swarajya Magazine, which recently milled a story by its clown columnist defending the crisis-ridden economy and the crisis faced by small and mid-sized enterprises by saying that it will be good for India to get rid of its small and middle scale industries and monopolise all trades in the hands of big corporations; RSS-trained men like Piyush Goyal and Amit Shah, who have no idea about how the economy functions, comes out and propagates their dumbfound logics and on top of that, they believe those logics will sell like hotcakes. The deck of jokers of Modi are not stopping from their faux passes, Dr Jitendra Singh recently added a new feather to the hat by saying that economics is a very serious subject to be left to the economists to deal with.

Though for many onlookers Narendra Modi and his cabinet and party colleagues may provide enough fodder for laughter, the seriousness of the issue and the grave danger awaiting the country cannot be overlooked for some cheap laughter dosage. Narendra Modi has recently acknowledged that the economy is facing tough times but escaped any responsibility by comparing his period with the peak crisis period of Dr Manmohan Singh’s rule. The BJP leaders fired their hatred-filled salvo against Yashwant Sinha and Arun Shourie, their former comrades, for criticising the Modinomics, i.e. the disastrous economic agenda of Narendra Modi. Everywhere there is a trend to overlook the problem and use some or other rhetoric or gimmick to divert the mass attention and media megaphones, which helps the Hindutva camp for the time being to hoodwink the people. Like after defending the price rise of petroleum products, Narendra Modi’s government was not only forced to reduce the hike somewhat (keeping it higher than before though) but also market the same deed with much fanfare, and also the discontent among the traders of Gujarat forced the Modi government to reduce GST rates on several products and items. Though Narendra Modi called it a jubilant occasion before the North Indian Hindu festival of Diwali, the traders of Gujarat aren’t happy with the new announcements as the new decisions will not affect the majority of the traders. The major section of Indian small and middle capital owners, working class, peasantry and the toiled people are reeling under the burden of exploitation imposed in the forms of higher taxes and inflation rate on them. Their collective anger may not overthrow the fascist divisive Hindutva regime of Modi immediately, but eventually, their strong movements will garner more strength and become a lethal force to combat the fascist menace and wipe it from India in the near future.