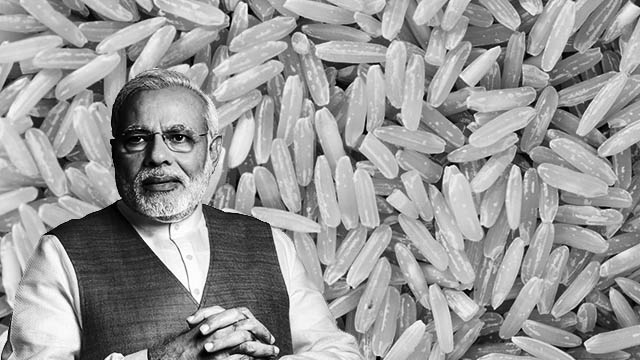 Amid the Coronavirus (COVID-19) pandemic, Prime Minister Narendra Modi’s government is not only duping the poor over their right to food by denying ration to millions during the lockdown, but it’s also showing the audacity to convert India’s surplus rice stocked in the government-owned Food Corporation of India (FCI) warehouses into ethanol to make alcohol-based hand sanitizer. If FCI’s surplus rice is converted to ethanol, then it will definitely reduce the quantity of rice that the poor, especially in the eastern and southern states, could’ve received through the public distribution system (PDS) and will worsen the hunger situation prevailing in India.

According to the government’s Press Information Bureau, the decision that FCI’s surplus rice is converted to ethanol in the present year was taken in a meeting of the National Biofuel Coordination Committee (NBCC), which was held in New Delhi on April 20th, under the Chairmanship of the Minister of Petroleum and Natural Gas Dharmendra Pradhan. The para 5.3 of National Policy on Biofuels, 2018, inter-alia envisages that during an agriculture crop year when there is a projected oversupply of food grains as anticipated by the Ministry of Agriculture and Farmers Welfare, the NBCC’s approval will allow conversion of these surplus quantities of food grains to ethanol.

On what basis Pradhan and the NBCC decided that it’s logical in the present year when COVID-19 pandemic has already taken the economy farther downhill and triggered massive job losses that if FCI’s surplus rice is converted to ethanol it will benefit the country? For whose sake the poor’s staple is taken away to manufacture ethanol and subsequently hand sanitisers? How many poor are affording hand sanitisers at a time when they are running frantically to bring food to the table for their families and are hoodwinked with Modi’s false promise of ration through PDS?

Rice is a major staple for the people of the eastern and southern states, where despite the FCI warehouses having an overabundance, the people aren’t getting an adequate supply of food grains through the PDS and there are fears that in the days to come the situation will worsen. The COVID-19 pandemic has not only hit the trade, commerce and industries, rendering people jobless throughout the world, it also has the potential to impact agricultural output in a big way, especially in the US and other western countries, and trigger export bans by major food exporters, which may result into a global food crisis.

Qu Dongyu, head of the United Nations’ (UN) Food and Agriculture Organization, Tedros Adhanom Ghebreyesus, director-general of the World Health Organization and Roberto Azevedo, director of the World Trade Organization (WTO), expressed in a joint statement their fear regarding a global food crisis prolonging the COVID-19 pandemic aftermath for a longer period than what’s anticipated. Even agricultural production in India may suffer due to the rapidly multiplying COVID-19 cases, a prolonged nationwide lockdown, due to which the rabi crop harvesting started late and with inadequate labour, and there is a possibility of the kharif (or monsoon crop) sowing getting delayed or hampered in many parts of the country, especially in places with poor irrigation.

In a rain-fed agrarian economy, the turmoil caused by the COVID-19 outbreak will certainly bring a big disaster. There is less likely a chance that the Modi regime will allow an UN-monitored food programme to feed the poor, as it will go against the prime minister’s boastful assertion of making India a superpower. At the same time, the WTO will pressurise India to export food grains as the US may reduce or stop exporting due to the cataclysm it’s going through. If India, exports food grains to comply with the WTO norms, then it will definitely reduce the availability of food to the poor at home and make it dearer for the lower strata of the middle class as well.

The proposal to consider that FCI’s surplus rice is converted to ethanol exhibits elitism and absolute disrespect for the country’s poor – the real wealth creators – by the ruling Bharatiya Janata Party (BJP). As the party that serves the interests of big corporates, it’s not surprising to see that the BJP transfer the rice in the FCI warehouses to them so that instead of feeding the dying poor, it can be used as a raw material for profiteering.

We have seen how it’s possible to provide nearly 44 kg food grains to each individual in the country with the present stock of food grains. A Business Standard report reveals how mounting stocks in India’s food warehouses aren’t feeding the hungry mouths. The FCI is sitting on 77.72 million tonnes of food grains – as on March 10th 2020 – with 19.24 million tonnes of unmilled paddy, from which approximately 12.99 million tonnes of rice can be produced. Yet around 122m people are denied ration as the Modi regime blatantly violates the National Food Security Act.

Thus, at a time when the dark clouds of food shortage and imminent mass starvation looms large on India, the Modi regime can show the audacity to suggest that FCI’s surplus rice is converted to ethanol to manufacture alcohol-based hand sanitisers. This is sheer replication of former British prime minister Winston Churchill’s 1943 Bengal famine model. Churchill’s policy of taking away rice from undivided Bengal to feed British soldiers killed three million Bengalis in the worst-ever famine of the 20th century. Unsurprisingly, Churchill is a much-revered figure in the Hindutva fascist camp that acted as a British lackey during the colonial rule.

No wonder, the present-day Hindutva fascists will walk following the examples set by their colonial-era masters and starve India, especially eastern and southern India, whose people they despise, to help the big corporate houses profiteer by ensuring that FCI’s surplus rice is converted to ethanol for manufacturing alcohol-based hand sanitisers. Capitalism’s enmity towards humanity isn’t new, this decision of the Modi regime to starve people to enrich a few did prove that once more.