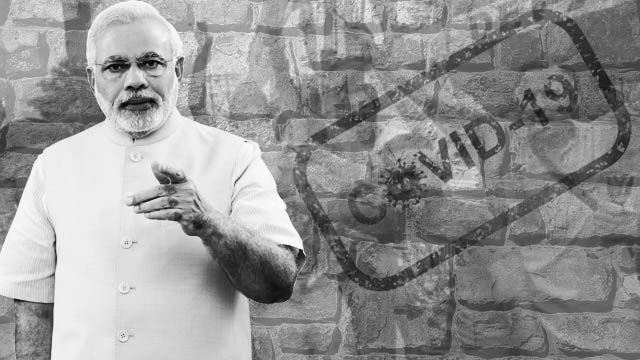 This watershed moment of history due to the Coronavirus (COVID-19) pandemic has created some sweet situations for Prime Minister Narendra Modi-led government and also has given rebirth to some bitter questions. But as usual, the Indian government is not in a mood to pay heed to such inconvenient questions. It’s busy in exploiting the favourable situations. India with her miserable healthcare system, inequality, a coterie of crony-comprador capitalists, the persistent anti-scientific temperament of the present government and, above all, the propagation of personality cult around Modi seems to be going to face a debacle of gigantic magnitude.

Degraded public healthcare system and the vampires of private healthcare who exploit the common people who have no insurance at all, has always been problematic for the Indians. The abysmal ratio of doctors and patients sum up the entire healthcare system. The lack of equipment and social security of our frontline healthcare workers have worsened the situation. Many doctors and nurses are already infected by COVID-19. The censorship to gag the resentment of the doctors has added a new low to the intolerance of both central and state governments towards free speech.

Apart from public healthcare, the COVID-19 is pointing fingers at the major political, economic and social questions. One of the most important questions is “is India heading towards a naked dictatorship?” The question is of tomorrow but is a question of utmost importance. The federal nature of India never suffered such an attack. Without discussing or very less discussion with the states Modi suddenly announced the lockdown without giving much time for preparation, thus jeopardising the lives of millions of migrant labourers and common people.

The Modi regime’s effort to credit the prime minister for the efforts of the whole country in containing the COVID-19 crisis reflects on his decision of sudden announcement of a nationwide lockdown. The announcement of most danger prone zone of West Bengal and sending central teams there without taking the state government into confidence is indicating the one-upmanship of Modi. The ruling Bharatiya Janata Party’s (BJP’s) propaganda machinery’s WhatsApp University is in full gusto to circulate the appraisals of Modi for tackling the COVID-19 fiasco.

No major mainstream press is raising a crucial question: where was Mr Modi throughout February? He was hugging his American counterpart Donald Trump and was shaking hands with Melania Trump. When Delhi was burning in a state-sponsored anti-Muslim pogrom and COVID-19 outbreak started kicking the Indian subcontinent, the prime minister was dining on the golden plate and the meek opposition was doing its job by tweeting from their respective comfort zones. When millions of people are starving, the government is failing to distribute the rice rotting in the warehouses and finally took the decision to use ‘surplus rice’ to make sanitisers!

The COVID-19 has helped Modi in at least two ways. Firstly, he has now a scapegoat to blame for his utter failure in reviving the economy. Secondly COVID-19 has given the government another chance to ingrain the rule of fear psychosis on both the conscious and the subconscious minds of the Muslim community.

The propagation of hate towards a particular community over COVID-19 pandemic has added a new feather in the cap of the Islamophobic state. No wonder if we see tomorrow Muslims are lynched over the allegation of spreading COVID-19. The incessant vilification of the Tablighi Jamaat by the Indian state and the mainstream press clearly states that the Indian rulers are not in a mood to introspect the trodden path. The sore of hate-mongering that the system has allowed to thrive up has become gangrene now. Even the northeastern people are going through racist slurs and physical harassment for spreading “China Virus” as the racists call COVID-19.

Is India turning into police and a surveillance state?

The second important question is whether, by using the pandemic as a subterfuge, India will be turned into a surveillance state? As Yuval Noah Harari, the author of “Sapiens”, says, the countries have two choices: one is to build trust among people to make people do the necessary measures and second is the countries can force them to do the same by monitoring through 24×7 surveillance.

The Indian government has never tried to build trust between the government and its people. The people’s fear to come forward and cooperate with the healthcare system is a proof of that. The common masses fail to sink in the fact why the government, which never cares for the people is now suddenly so eager to save them from COVID-19? They have logic in their doubt at the intention of the government.

The launching of Arogya Setu app has raised the eyebrows of some techies. Is it only for tracing COVID-19 infected people? Given the record of the Modi regime in protecting the Aadhar data and the allegations of WhatsApp snooping, it can’t be trusted fully. The vague privacy policy of the app and the lack of a comprehensive data protection law in India further cement the suspicion. Many have apprehension by collecting data and using it further, the Modi regime will institutionalise surveillance and invasion of privacy. As Internet Freedom Movement writes, “India’s Arogya Setu collects multiple data points for personal and sensitive personal information which increases privacy risks.”

When all Indians are busy grappling with the constant fear of COVID-19, the state is busy silencing the dissenting voices. The arrest of Gautam Navlakha and Anand Teltumbde is no doubt a blot on the system. The government is capitalising the fear of the common people for getting infected to unleash police brutality on the marginalised people who don’t have the luxury of staying at home and playing the Facebook dare games. The murder of Rizwan Ahmed, Sagir Jamil Khan, Raju Velu Devendra, etc, by the state machinery, didn’t stir the collective sleeping conscience of the society, the privileged classes and the press who are eulogising the police so vehemently as if the police are doing social work!

Yes, to kill the marginalised is social work, as it will stop the privileged babus and bibis from getting infected! Who cares if some hungry people die in protecting the upper class? The rampant arrests of activists by the Delhi Police, falsely accusing them of stirring the Delhi pogrom to shield the real accused like BJP leader Kapil Mishra and Parvesh Verma is an act of utmost hideousness in the time of a pandemic. Did the police show the same dedication in protecting the victims of the Delhi pogrom? The answer is obvious.

The use of the word ‘war’ in reference to the attempt to contain the pandemic shows the attitude of an establishment. In war brutality of forces can be normalised as the government is doing now. As Nobel laureate Amartya Sen rightly points out, “Tackling a social calamity is not like fighting a war which works best when a leader can use top-down power to order everyone to do what the leader wants — with no need for consultation.  In contrast, what is needed for dealing with a social calamity is participatory governance and alert public discussion.”

The ordeal of Kashmiri photojournalist Masrat Zahra, Kashmiri journalist of The Hindu Peerzada Ashiq, and many like them are discernible through the hardships they are facing for simply saying truth to the rulers.

The path taken by the Modi regime so far to combat the COVID-19 apocalypse is only of rhetoric mongering and promoting corporate loot and plunder at the hour of distress. Megalomaniac leaders with their prejudices and anti-scientific temperament are busy doing politics over the dead bodies. The gaumatra party that took place under the nose of the Modi regime in Delhi on March 14th, when the Tablighi Jamaat congregation was ongoing, with thousands assembling to drink the cow urine served by Akhil Bharatiya Hindu Mahasabha – the organisation complicit in killing MK Gandhi in 1948 – leadership with a promise of curing COVID-19 shows the Modi regime’s commitment towards the development of science in India.

With the grim future of the economy and hopeless despair on the present, the common Indians are lulling their minds by devouring the feeds of social media. What can we do when the ringmaster of the governmental circus knows how to manipulate people? He is the master manipulator. But slyness cannot go on for long, it’s exposed in due time. And time is knocking on the doors of the government.