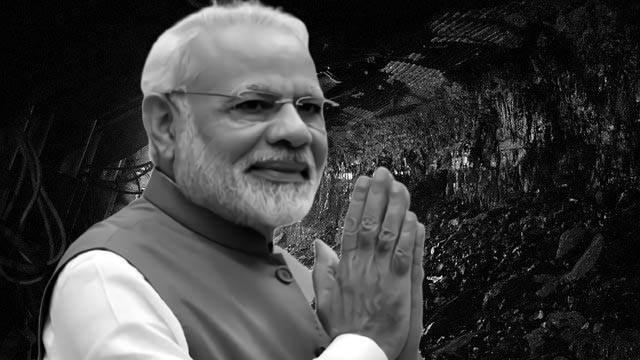 The Indian mainstream press’s cacophony over an alleged Chinese intrusion, which Prime Minister Narendra Modi’s government vehemently denied, camouflaged one of the most crucial stories of the time, which would’ve otherwise evoked deep nationalist sentiments among the masses. On June 18th 2020, Modi announced the auction of 41 coal blocks to private capital, the biggest environment-threatening liberalisation decision of his government, as per his “Atmanirbhar Bharat” (“self-reliant” India) scheme. These 41 coal blocks, out of more than 70 in the list, can produce 225m tonnes of coal at their peak, which is about 15% of India’s projected total coal production in 2025-26. There is a claim that 280,000 new jobs will be created through these auctions. But what are the differences between the propaganda and the truth? Can Modi’s coal block auction decision be hailed as one that will generate employment in these troubled times? Will mining start in these coal blocks any time soon and contribute to the national economy in the forms of taxes and through employment generation? If there is such a possibility then why didn’t the government, which hitherto had a monopoly over coal, take the lead using the public sector units to generate employment?

As per a report in The Times of India, 18 coal mines in the Vidarbha region of Maharashtra, which Modi’s Bharatiya Janata Party (BJP) had auctioned in 2014, soon after coming to power in the state, didn’t find a single bidder till date. The slump in the global economy, caused due to the crisis of capitalism and the fall in the profit ratio, has affected the demand for coal. Demand for coal has also slumped globally due to the fall in electricity consumption and the lockdown that the world went through to deal with the COVID-19 pandemic. Except for India and China, there is not much coal demand globally now due to green capitalism’s advocacy for alternative and clean energy sources. Therefore, when the government or the Prime Minister himself claims that the coal block auction and subsequent mining will create 280,000 jobs, then that entire calculation is also done based on assumptions of a normal economic condition where demand is stable. But in a scenario where the global economy is going downhill, the coal sector can’t be a sector the government can emphasise upon to generate employment.

But then, Modi’s coal block auction decision wasn’t driven by an urge to create jobs. Rather, by diluting labour laws, the BJP-led government is turning the working class into neo-slaves of the parasitic crony-comprador capitalists and their foreign corporate masters. Due to the incessant fall in the rate of profit, this neo-slavery system will help capitalism to sustain itself by reducing the wages of the working class. Actually, this idea of auctioning 41 coal blocks to private entities by diluting all environmental and social regulation norms came only after corporate giants like Adani Power, Tata Steel, JSW, etc, told the government to build a liberalised coal mining block allocation system without environmental hassles in February 2020, three months before Nirmala Sitharaman announced the government’s plan to sell India and its resources to big capital at a throwaway price.

By obliging these big capitalists and by flouting all environmental laws and checks to help corporates carry out unbridled coal mining the Modi regime is tying up itself in a complex web of mass unrests in the days to come. The three broad outcomes of Modi’s coal block auction decision will be catastrophic for both the government and its patron capitalists.

Firstly, there can be a replay of the Vidarbha experience and these coal blocks, put on auction at a time when global capitalism is going through an existential crisis, will neither fetch buyers nor start any activity. Even if Modi’s chief patron Gautam Adani’s mining conglomerate acquires a lion’s share in these blocks, it won’t be feasible for the company to start mining due to the slump in demand. There’s also the problem of liquidity. For the corporates to participate in the auction, it’s imperative that the public sector banks are ready to offer them enough credit to buy these coal blocks, which will eventually tie-up the fortune of these banks with the fate of the coal, which won’t find many buyers soon, thereby such debts will turn into bad debts and increase the non-performing asset load of these banks and making them vulnerable to financial collapse.

Secondly, even if the corporates buy the stakes, they must take the government’s help to evict the tribal people living in the villages and forests where these coal blocks are situated. Massive eviction drives will require a large-scale military operation and thereby stoke anger. This can be capitalised by the left-wing extremists, which will drag on the conflict for a long duration, causing bloodshed and unrest in the affected regions. The Modi regime’s plan to reintroduce the anti-people land acquisition bill that he was forced to withdraw in 2015, will eventually stimulate large-scale rural protests, which will strengthen the people’s movement against coal block auction. Already people’s organisations are organising the masses for a large-scale movement against eviction and destruction of the environment by the corporate mining giants. Jharkhand Chief Minister Hemant Soren has challenged Modi’s coal block auction decision in the Supreme Court. Such movements against Modi’s coal block auction decision will throw up a strong challenge before the sclerotic regime that’s keen to pulverize all type of protests and dissent.

Thirdly, coal mining is the most exploiting sector for the working class. If the Modi regime is planning to offer right-less, enslaved workers to the corporate houses by disenfranchising many poor people through the National Register of Citizens exercise, then it will face a severe challenge. The coal workers, especially those who work in deep pit mines, are prone to organise faster than the workers of other industries due to the excessive exploitation and inhuman working conditions they are subjected to. This will snowball into a major working-class movement of the coal workers if we, hypothetically, consider that the mines will become operational soon. A massive coal workers’ struggle against exploitation can have a massive impact on the country’s working-class movement and reinvigorate the spectre of a militant trade union movement that Modi and the BJP’s corporate sponsors want to keep buried deep inside the earth.

Only time will tell us about the outcome of Modi’s coal block auction decision. However, it’s evident that neither Modi nor the BJP will have a cakewalk on this issue as the 41 coal blocks are in areas where mining will have severe socio-economic and environmental impacts. This shameless corporate appeasement policy of the BJP will eventually spark a long-term conflict between the common people, the tribal masses and the corporate mining giants, in which the defeat of the latter can bring a new turn in Indian politics and policy-making processes. If there is a nemesis for Indian fascism, then it’s the united struggle by the poor against corporate aggression. By putting India on the shelf for the corporates, Modi has gradually and ironically unleashed that very force, which will bring his empire down.