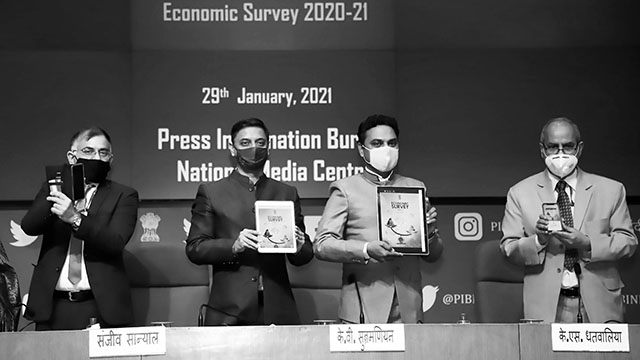 The Union Finance Minister Nirmala Sitharaman tabled the Economic Survey 2020-21 in the Parliament on Friday, January 29th 2020. Despite admitting that the Indian GDP will contract by 7.7% in the financial year (FY) 2020-21, the Survey paints a rosy picture and projects a “V-shaped recovery” curve. The former Planning Commission head Montek Singh Ahluwalia rubbished the claim in an interview and called the recovery “K-shaped”. In its attempt to portray “all is well”, this Survey went on eulogising the devastating and pro-corporate policies of Prime Minister Narendra Modi.

Ironically, contradicting the logic behind the agriculture reforms through the contentious pro-corporate farm laws, which triggered the massive farmers’ protest movement, the Economic Survey 2020-21 shows that agriculture is the lone sector that will experience growth in the FY 2020-21—3.4%—contrary to the corporate-controlled sectors like industries and services, which are estimated to contract by 9.6% and 8.8% respectively. This means the employment situation will continue to remain in absolute doldrums. However, it didn’t answer how can the agriculture sector grow when there is no corporate involvement in it.

Then the Economic Survey 2020-21, like a novice, is rejoicing a current account surplus of 2% of the GDP in the FY 2020-21, which it’s claiming is a 17-year-high. However, as we have discussed in this article, months ago, a current account surplus during the COVID-19 period isn’t an achievement but a sign of the decline in imports due to a drastic drop in international trade and commerce. With a restoration of normal trade and commerce, which looks bleak now, the current account will go into deficiency as the government will fall short of funds to pay for oil imports.

Apart from this, the Survey is rejoicing the increase in the inflow of net foreign investment (NFI). The foreign institutional investments (FIIs) have gone up in recent months due to the weakening of the US dollar. The FIIs and NFIs aren’t yardsticks to gauge economic health but only shows the frantic search for a bubble by international finance capital. The rise in fictitious capital in India has enriched the super-rich through speculative stock trading, while the poor have suffered the most during the lockdown period and thereafter.

The Oxfam’s report “The Inequality Virus” showed that the top 100 billionaires in India saw a 35% increase in their wealth, ie, their fortune increased by Rs 12.98 trillion during the pandemic. The major reason behind this was their investments in stocks and using the volatility in the speculative market to bring more investment from foreign shores. This isn’t a sign of economic growth, remotely.

Throughout this Economic Survey 2020-21, the Modi regime’s decisions during the COVID-19 pandemic are praised, as well as the pandemic is blamed for the economic crisis, which worsened since the FY 2016-17, following the demonetisation exercise that destroyed India’s medium, small and micro enterprises (MSMEs), the core of its vibrant unorganised sector. Moreover, a large amount of unemployment it created, which wasn’t ever absorbed again, began the biggest demand crisis in the economy, resulting in further unemployment.

While the Economic Survey 2020-21 has emphasised on the role of government expenditures to help an economy recover from a demand crisis, the steps taken by the Modi regime since the FY 2019-20 on the economic crisis have been essentially supply-side crisis-handling steps, which didn’t help to create demand by increasing employment and providing more money in the hands of the people. The counter-cyclical fiscal policy, which the Survey hails as a solution to economic crises, didn’t see any successful implementation in India.

When Modi announced that his government will introduce a Rs 20 trillion package to boost the economy in May 2020, which Sitharaman later announced in five tranches, both the poor and the rich—with contrary expectations—parked hopes on the package. The “Atma Nirbhar Bharat” (self-reliant India) package was nothing of sorts that would help the poor, the MSMEs or kickstart the economy. It only made big corporate houses happy by providing them with an opportunity to appropriate the public assets as well as tighten their grip on agriculture.

Now, when the Economic Survey 2020-21 is studied in the context of the real economic scenario, the worsening employment situation, and the need to support the MSMEs and other sectors, especially to increase government expenditure using the public sector, it will be seen that the real challenges are omitted, or in-depth analysis is avoided. This survey’s lacunas and the self-contradictory statements, especially over healthcare, employment, government expenditures, etc, prove that the Modi regime is keen to cover up its failures in the economic front rather than presenting the true picture of the economy. This shows, the Union Budger 2021-22 will be as hollow and pro-rich as the previous packages, leaving India dry and in crisis.