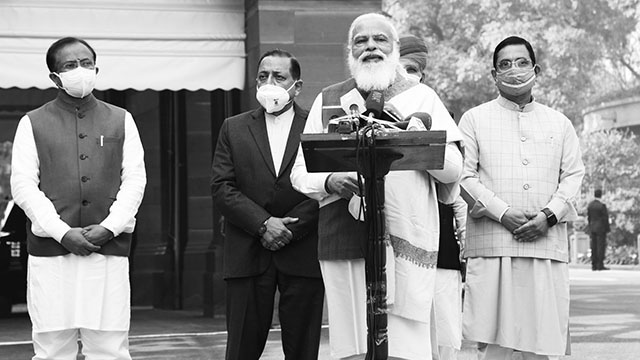 The last time Prime Minister Narendra Modi’s “Mann Ki Baat” (heart’s words)—a radio monologue—was broadcasted, the agitating farmers banged utensils throughout Haryana, Punjab, Rajasthan, Uttar Pradesh and other states. This time, the prime minister tried to get back at them by criticising the historic tractor march on the Republic Day. He cunningly tried to vilify the movement altogether by lying.

During his “Mann Ki Baat” monologue on January 31st 2021, Modi said “the country was saddened by the insult to the Tricolour on the 26th of January in Delhi”, referring to the farmers’ tractor march. Now, this statement in his 31 minutes and 35 seconds-long monologue is based on utter falsehoods that his Bharatiya Janata Party (BJP) and its parental body Rashtriya Swayamsevak Sangh (RSS) have been propagating to denigrate the farmers’ movement. The alleged “insult to the Tricolour” bush telegraph is used to stoke the Hindutva-incensed, upper-caste Hindu middle-class and elites’ jingoistic sentiments.

By accusing the farmers of insulting the national flag, Modi has, henceforth, officially endorsed his government’s battle against the farmers. Though it has been repeatedly proven that the Sikh holy banner of Nishan Sahib was unfurled at the Red Fort on an empty flag stand, the BJP and the RSS have been accusing that a tricolour was taken off by the Sikhs. Despite unleashing brutal state violence on the farmers on January 26th and later, neither Modi nor any of his ministers, especially the Union Home Minister Amit Shah, apologised for the ordeal caused to the farmers.

Modi conveniently evaded the topic of the farmers’ agitation and only dealt with the Republic Day incident once, without going into details. He spoke in length about a lot of initiatives taken by people, as well as cricket, but cunningly evaded the farmers’ demand for repealing the corporate-friendly farm laws. Rather, Modi asserted that “…the government is committed to modernising agriculture and is also taking many steps in that direction.” By saying, “the efforts of the government shall also continue in future,” Modi implied that the government won’t go back on the agriculture reform measures.

This is an open confrontation. Modi and the BJP-RSS are exhibiting this nonchalant attitude as they are acting with a sense of impunity. This impunity is rooted in the security that they are assured by their corporate sponsors as well as the big international imperialist wings like the International Monetary Fund (IMF) and the World Trade Organization (WTO).

It’s the IMF and WTO whose agenda the government is implementing by pushing the farm reforms despite of the farmers’ dissent. The Indian agriculture sector has been on the radar of global big capital, the IMF and the WTO for decades. Now, when they are close to achieving the objective, neither they want to back-off, nor they will allow the BJP to do anything that will hamper their interests.

Driven by this sense of impunity, Modi has been stating that his government is “one phone call away”, which means he is still sticking to the government’s proposal given to the farmers on January 22nd when it agreed to halt the implement the laws for 18 months. This shows that the Modi regime or the BJP-RSS will talk to the farmers with the pre-condition of not repealing the laws, negating the principal demand for repealing the laws.

This means the government wants the ordeal on the farmers to continue, and any offer to talk is merely a bait to drain the energy and patience of the farmers. Moreover, the farmers have understood this strategy and are actively intensifying their movement throughout northern parts of India, pushing the BJP to the margins. The majority of the farmers’ leaders have refused to budge, which will continue to cause ignominy for the Modi regime.

As the “Mann Ki Baat” is a monologue, where the emperor wants to just deliver sermons, without listening to the people’s grievances, it’s imperative to reply to him on the streets. As the mainstream Opposition has failed to develop an effective political movement on its own and is now acting as a parasite to derive mileage from the unprecedented farmers’ movement, it’s clear that the real challenge to the tyrannical regime needs to come from the farmers and the working class. The future of India depends on the course of this historic farmers’ movement that has pushed the BJP-RSS to retreat.