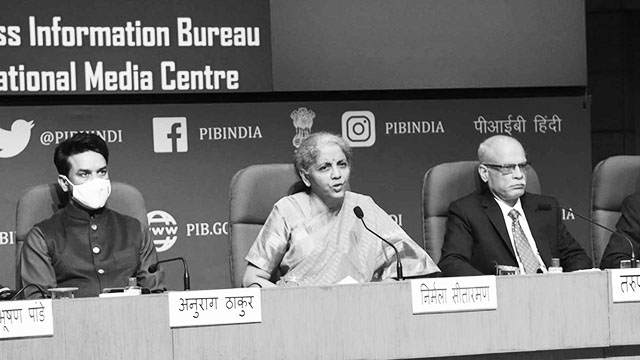 Union Finance Minister Nirmala Sitharaman is known for adhering to rituals quite religiously. Whenever it’s time for the Union Budget preparation, she would lend a hand in cooking the halwa (Indian sweet dish) as a part of a Hindu ritual followed by her ministry. Another ritual Sitharaman follows religiously is to sweep all discomforting details beneath the carpet. This is the reason that Sitharaman omitted “unemployment” in her budget 2021 speech just as she did in 2020.

As the Union Budget 2021-22 is a contentious document, working as a roadmap of neo-liberal economy’s overall hegemony and sell-out of India’s public assets, it has remained largely silent on the unemployment part. Throughout Sitharaman’s budget speech, the term “unemployment” didn’t even feature once, while at the same time, employment was mentioned only six times. Naturally, the question that will arise is why Sitharaman omitted “unemployment” in her budget 2021 speech? Has the employment situation worsened or turned better in the last few days? Is this because this budget ends the recruitments in government jobs outside the security services?

According to the Centre for Monitoring Indian Economy (CMIE), the unemployment problem is far from over in India. The last 30 days’ unemployment average in the first week of February 2021 remained 6.2%. This is still higher historically, though less than the spike it experienced in the financial year (FY) 2019-20 and during the lockdown when it reached 23.5%. But there have been a lot of troubles in employment generation, especially after Prime Minister Narendra Modi imposed an ill-planned lockdown on the country abruptly on the midnight of March 25th 2020.

The manufacturing sector, which Modi and his coterie are claiming to have been nurturing under the “Make in India” scheme, has experienced a drastic fall in employment. While the sector employed 40m people in the FY 2019-20, as per a CMIE report, the total number of jobs fell to 24.6m in the first quarter (Q1) of the FY 2020-21, apparently due to the lockdown shock. Though the manufacturing sector has recovered gradually and reached to a total of 28.8m jobs in the Q3 of the FY 2020-21, there is still a shortfall of 11.4m jobs vis-à-vis the FY 2019-20.

Sectors that suffer severe unemployment are the retail industry that saw 10m job losses, followed by travel and tourism with 5.5m job losses, education 5.3m job losses and personal non-professional services 2.5m job losses. Though there has been a recovery in a few of these sectors by the Q3 of the FY 2020-21, sectors like education continue to suffer. In these circumstances, it’s indeed important to emphasise on developing those sectors which could sustain itself despite the lockdown, and in this nothing can beat agriculture, which is scorn in the eyes of the Modi regime.

The sudden surge in the employment provided by agriculture proves that a large section of those who lost their employment in other sectors during the lockdown, especially the migrant workers who walked hundreds of miles back to their villages, took up agriculture as a mean to survive. Now, with Modi’s adamant push to open the agriculture sector to the corporate sharks, the sector will not only suffer the lack of employment-generating power but will also see a large-scale eviction of those who have been farmers all their lives.

While the Modi regime’s focus remains on appeasing the corporate sponsors of the BJP through liberalisation of the economy and by selling-off public assets, the unemployment situation will keep worsening despite gimmicks by Sitharaman and others to conceal the depth of the issue. It would need a complete diametrically opposite strategy to revive the Indian economy, especially by putting the public sector in the driving seat, by reducing the tax burden on the common people and imposing heavy taxes on the wealthy as well as to carry out an effective and complete nationalisation of key industries, services and strategic sectors. This would’ve helped generate income opportunities and absorbed a large section of the unemployed people. But as Sitharaman loves to live the rituals, she and her boss would take any steps to coverup the real issues plaguing the Indian economy. Unemployment will remain an ignored issue in the long run.