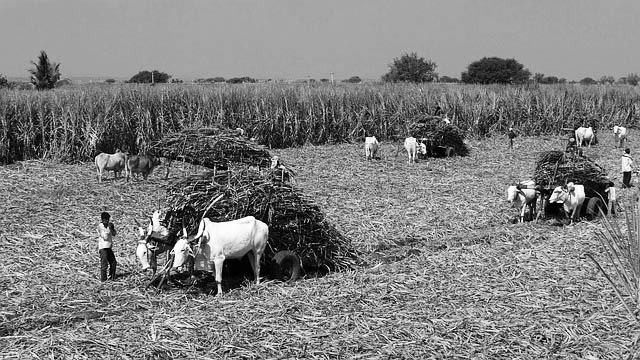 The Bharatiya Janata Party (BJP) of Prime Minister Narendra Modi has hardly left any harsh words in its attempt to vilify the ongoing farmers’ movement against the three anti-farmer laws. The recent report on mounting sugarcane dues and the BJP’s conspicuous silence on the issue confirms why the farmers’ movement is justified.

The sugarcane farmers of western Uttar Pradesh, led by farmer leader Rakesh Tikait, have been demonstrating at East Delhi’s Ghazipur border since November. Apart from repealing the three anti-farmer laws and a legal guarantee of minimum support price (MSP) for their produce, the sugarcane farmers are also demanding the payment of the dues from sugar mills patronised by the BJP.

As the sugar mills buy sugarcanes on credit, the farmers follow up for dues incessantly and they haven’t received the payments for the crops supplied in the 2019-20 sugar season (October-September).

Unlike MSP, paid at government-controlled markets (Mandis), sugarcane is bought at state advised price (SAP) by sugar mills. As per the Sugarcane (Control) Order 1966, sugar mills are legally bound to pay the SAP within 14 days of purchasing the crops. Failing which they need to pay an interest of 15% per annum on the due amount. The BJP, in connivance with sugar mill owners, is trying to do away with the SAP regime.

Instead of the SAP, the sugar mills are now demanding that the BJP bring an MSP regime in the sugar cane procurement process and end the legally binding clauses. This will provide further leeway to the sugar mills while depriving the farmers.

The SAP for the year 2019-20 was Rs 325 per quintal in Uttar Pradesh. The farmers, who sell their produce against “Parchis” (sugarcane indents), each of which represents a bullock cart-load of 18 quintals of sugarcane, are paid for a few carts and the rest remain pending. According to a report by The Indian Express, Uttar Pradesh mills owe sugarcane farmers Rs 24.70 billion out of the Rs 358.98 billion-worth canes they crushed in the 2019-20 season.

In the meantime, the Uttar Pradesh mills have further crushed 36.32 million tonnes of cane in the current season, worth Rs 116.60 billion as per the last year’s SAP of Rs 315 per quintal for general and Rs 325 per quintal for early-maturing varieties of sugarcane. The report states that only Rs 24.27 billion of sugarcane dues has been paid by the mills. But as the sugar mill owners regularly donate to the BJP’s coffer, they enjoy the Yogi regime’s shield. But the farmers are left without money.

While, since coming to power in March 2017, the Yogi regime has increased the SAP by merely Rs 10 a quintal, knowing that it can dispel farmers’ discontent using communal polarisation as its time-tested weapon, the recent farmers’ movement has played a spoilsport for it.

According to sugar mill owners, surplus production in 2017-18 and 2018-19 triggered depressed sugar prices, leading to mounting sugarcane dues to farmers. The sugar mills are demanding that the Modi regime open export channels to Pakistan and Iran to increase sugar sales. The government has remained non-committal, though the Pakistan government has allowed imports of 500,000 tonnes of sugar.

It was Tikait’s emotional outburst that spoiled the Modi regime’s plan to evict the protesters from Delhi’s borders following the tractor rally on January 26th in the capital city. Now, as an eerie and vexing alarm rings over the sugarcane dues, and as the sugar mills are lobbying with the Yogi regime to help them get rid of the SAP regime with a transition to an MSP regime, the sugarcane farmers of western Uttar Pradesh, who have given a severe jolt to the BJP, politically and organisationally, must intensify their movements to force the government to accept their demands and force the sugar mills, whose owners don’t face any cash crunch in their lives, to clear all sugarcane dues to the farmers.