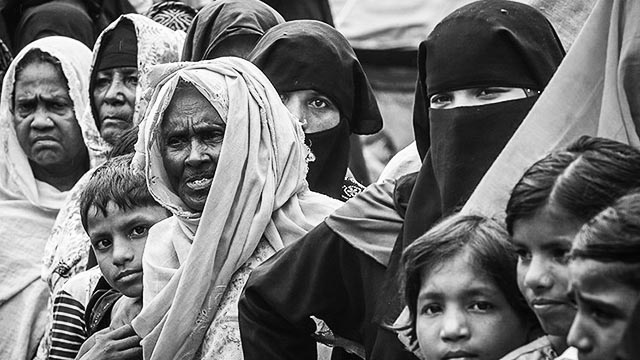 As the campaigning for the assembly elections in Assam and West Bengal is at the peak after the first two phases of the exercise, xenophobia is playing an important role in wheedling the gullible voters. None masters in this art like Prime Minister Narendra Modi’s ruling Bharatiya Janata Party (BJP), which is implementing its time-tested communal polarisation tactics to consolidate the majority Hindu votes in its favour. Though only the Bengali-speaking Muslims remained at the receiving end of the BJP’s flak hitherto, the “Rohingya infiltrators” bogey is raised now for better results.

During the 2019 general elections, Union Home Minister Amit Shah threatened to weed out all “Bangladeshi infiltrators”—the term used for Bengali-speaking indigenous Muslims—and compared them with “termites”. But during the 2021 assembly elections in Assam and West Bengal, the “Rohingya infiltrators” chimaera has been popularised. This xenophobic campaign has been amplified by Modi’s toady press, which calls Rohingyas a threat to India’s sovereignty and security.

Not just the Hindi-speaking proselytisers from the Hindi-belt, para-dropped in West Bengal by the Rashtriya Swayamsevak Sangh (RSS), the BJP’s parent body, but even those recently baptised to the Hindutva fascist doctrine, especially the turncoats from the Trinamool Congress (TMC), are peddling the same narrative, shamelessly. Suvendu Adhikari, a former lackey of West Bengal’s incumbent Chief Minister Mamata Bandopadhyay, magnified the purported threat posed by the “Rohingya infiltrators” in his constituency Nandigram.

Facing a strong challenge from Bandopadhyay, who is contesting against him, Adhikari used the “Rohingya infiltrators” bogey incessantly to captivate Hindu voters. Adhikari, who claimed RSS affiliation during his school life, has been claiming that the “Rohingya infiltrators” are supporting Bandopadhyay’s TMC, and if the “Begum”—as Bandopadhyay is denoted in the RSS’s parlance —wins, the state will be turned into a “mini-Pakistan”. In his attempt to ape the Hindutva rabble-rouser Kapil Mishra of Delhi pogrom fame, Adhikari is blabbering more Islamophobic rhetoric than any other BJP leaders.

The xenophobia around “Rohingya infiltrators” isn’t a new one. It started in August 2017, when the notorious Myanmar Army—condemned all over the world for its excesses—launched the bloodiest genocidal campaign against the minority Rohingya Muslims in the Rakhine province. The Rohingyas have been living in Rakhine province for centuries and have been denied citizenship and rights in Myanmar as the military rulers and Buddhist fascists consider them “Bangladeshi infiltrators”.

The Rohingya genocide in Myanmar has been described by the United Nations (UN) as a “textbook example of ethnic cleansing”. Though the Rohingya genocide by the Myanmar Army, backed by Buddhist fascist rabble-rouser monks, shook the world’s conscience and drew global condemnations, India under Modi ignored the humanitarian crisis and strengthened ties with Aung San Suu Kyi, the former Nobel laureate, who was also condemned for her complicity in the genocide. Even now, when the Myanmar Army is on a rampage against the very people who supported the Rohingya genocide unapologetically, including Suu Kyi, New Delhi is attending its military shows and Modi’s top sponsors like Gautam Adani are doing business with the junta.

No wonder, when the BJP has shown sheer insensitivity towards the cause of the Rohingya Muslims fleeing imminent death and taking refuge in neighbouring Bangladesh, these hapless people would become an easy target for the Hindutva universe. Soon, through a concerted campaign, the Hindutva fascist RSS-led media universe and internet trolls amplified a narrative around a purported threat posed by “Rohingya infiltrators” to India’s security, which helped the Modi regime to blatantly deny shelter to 40,000 Rohingya refugees. Even those with the UN’s certificates, who took refuge in India, face brutal police atrocities in Jammu & Kashmir, Delhi and Telangana.

There is no substantial evidence to show that “millions of Rohingya refugees” have taken shelter in West Bengal, which is far from the India-Myanmar border in North East India. There is recorded evidence of Rohingya refugees seeking shelter through the UN in the North East, but not in West Bengal. Yet, everywhere, even in street brawls between goons belonging to the BJP and the TMC, the “Rohingya infiltrators” narrative is used in galore, and the invisible “infiltrators” are blamed for the deterioration of West Bengal’s law and order situation.

So much for the invisible Rohingya Muslims, whom none in West Bengal has seen but many believe they exist, however, none talks about the mayhem carried out by the thugs brought to West Bengal by the RSS-BJP from eastern Uttar Pradesh and Bihar, who are rampaging throughout the state and threatening the people with dire consequences if they don’t vote for the BJP. None of Modi’s lapdog media outlets dares to show these optics. Yet, the narrative that the “Rohingya infiltrators”—whose exact numbers are not even known by Shah, whose men guard the borders—are posing threat to India’s sovereignty, is sold in galore to susceptible urban middle-class, upper-caste Hindus, to trigger bigotry and xenophobia.

As a country that has witnessed many state-sponsored communal pogroms, India should show sensitivity towards the Rohingya refugees who fled imminent death in their homeland. A people with no homeland to return to, need solidarity and support from neighbours, which Indians must offer. But, when fascism entrenches deep, it exhorts its subscribers—in the case of India, the politically crucial, upper-caste Hindu elites and urban middle-class—to give up basic tenets of humanity and compassion. Only then it becomes easy to cajole such incensed masses to gulp hyper-masculine jingoistic baits. The BJP and the RSS have managed this quite well.

This year marks the centenary of the foundation of the National Fascist Party by Benito Mussolini in Italy. Rather than Adolf Hitler, who plagiarised much of his National Socialism or Nazism from Mussolini, the Italian dictator was the founding father of fascism and, 100 years later, the RSS, which sent delegates to meet him, is successfully carrying out the mission that was left unfinished. The Italian fascist dictator, Mussolini, and the Nazi warlord, Hitler, had used target communities as punching bags to bewitch the middle-class and elites, along with a section of the working class, which is now done religiously by the RSS-BJP in India.

The “Rohingya infiltrators” bogey, apart from “Bangladeshi infiltrators”, is one of the crucial weapons used by the Indian successors of Mussolini and Hitler, who are now ascending to that saturation point from where the very working class, the farmers and other toiling masses shall topple them. Fascism can’t retain its hegemony forever, which is proven by the inspirational farmers’ movement against the Modi regime’s pro-corporate policies.

While the RSS-BJP attempts to submerge West Bengal in eternal darkness by using xenophobic ranting like “Rohingya infiltrators” et al, the rising sun in the northwestern skies of Haryana, Punjab and western Uttar Pradesh brings hope and a promise of a better tomorrow for all.