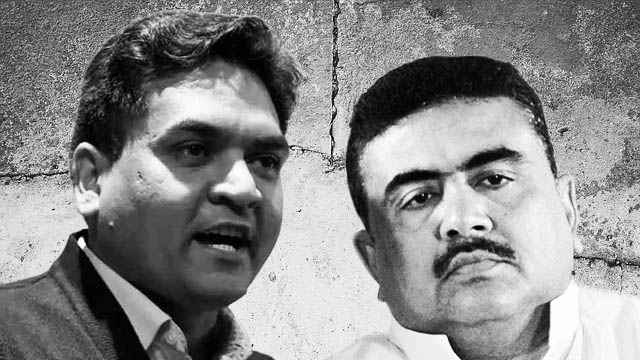 History repeats itself. But on different notes at different points in time. The campaign wrapped up by the Bharatiya Janata Party (BJP) on March 30th 2021 at Nandigram, Purba Medinipur district, was so far the utmost vitriolic and Islamophobic campaign in the present phase of West Bengal Assembly elections. Spearheading it, Suvendu Adhikari, turncoat former protégé of Trinamool Congress (TMC) supremo Mamata Bandopadhyay, has proved why he is going to be the next Kapil Mishra of the saffron party in West Bengal.

Nandigram—the epicentre of a massive farmers’ resistance struggle in 2006-08 that paved the way for Bandopadhyay’s rise—has grabbed the attention of the press and political pundits as Bandopadhyay is contesting against Adhikari from this constituency he calls his turf. It’s Ms Bandopadhyay’s challenge to Adhikari that made the entire BJP bandwagon parachute to Nandigram and run a concerted, vitriolic campaign, the most vicious one in West Bengal so far. Adhikari, who remained a loyalist of Bandopadhyay along with his father Shishir Adhikari, another TMC stalwart who joined the BJP, unveiled his utmost communal character.

Mishra, the rabble-rouser who fuelled the February 2020 anti-Muslim pogrom in North East Delhi, was a loyalist of Aam Aadmi Party (AAP) chief Arvind Kejriwal, a soft-Hindutva peddler like Ms Bandopadhyay. He was a vocal critic of the BJP and even became a minister in Kejriwal’s cabinet, only to part ways in 2017. He joined the BJP after quitting the AAP and fought the Delhi Assembly elections 2020 on a BJP ticket, losing to the AAP despite his strong Islamophobic campaigning.

While Mishra shared the Hindutva fascist ideology and covered it up with his liberalism for a brief period, Adhikari was involved with the Rashtriya Swayamsevak Sangh (RSS) since his childhood under his father’s watch, who was a Congress stalwart then. This shows the promiscuity of the Congress party’s men who roost the venomous Hindutva fascist ideology in their hearts. Adhikari’s RSS roots and his tryst with Islamophobia was known to Bandopadhyay and yet she accommodated him, along with many other such politicians who are now jewels in the crown of the BJP in West Bengal.

During his Nandigram campaign, Suvendu, accompanied by his father Shishir, clearly mentioned that he is least interested to garner the 30% Muslim votes and is keen to reach out to only the 70% majority. He openly resorted to Islamophobic ranting to belittle Bandopadhyay. RSS men under his command are rampaging throughout the district. Bandopadhyay alleged an attack that hurt her leg and rendered her wheelchair-bound throughout the campaigning. It’s doubted that the BJP tried to intimidate her through the alleged attack utilising the lapse in her security due to the Election Commission of India’s handling of the law and order machination in the poll-bound state.

After the campaigning for the second phase of the elections, scheduled on April 1st, ended, Bandopadhyay alleged she was again attacked in Nandigram. The TMC men have alleged that their former colleagues who joined the BJP in the constituency following Adhikari, have been attacking them in different parts of the constituency. Bandopadhyay, who called the Adhikaris, who belong to an aristocratic feudal family, “Mir Jafar”—the infamous renegade commander of Bengal’s Nawab Siraj ud-Daulah—citing their betrayal, has also accused the father-son duo of bringing the police in Nandigram on March 14th 2007. The police firing on that day, hitherto blamed on the former Left Front government, killed several protesters, turning the political tide of West Bengal and helped her win power by toppling the Left Front’s rule in 2011.

But these revelations about the Adhikaris, which are contrary to what the TMC had alleged earlier by accusing the Left Front of the March 2007 violence, exposed a weak flank in Bandopadhyay’s fortress. If she had known that the Adhikaris brought the police, then why she remained mum on the issue so far? What made her also provide political shelter to such utmost communal elements like Adhikari, who is competing with Mishra to be a modern icon of Hindutva fascism?

This intrinsic ideological bankruptcy of the right-wing camp, to which Bandopadhyay and Adhikari belong, shows how incompatible the organisations like the AAP in Delhi and TMC in West Bengal are to combat the Hindutva fascist menace of the RSS-BJP. It also proves that the existence of an Adhikari or a Mishra within the ranks and files of such “secular” parties isn’t a surprising thing but the most normal outcome. Now, Nandigram, which became a Waterloo for the Left Front in 2011, will elect one among these two. But that won’t change the scenario at all.

Nandigram was the epicentre of a farmers’ struggle against corporate land acquisition, and it was Bandopadhyay who usurped its leadership for her political gains. Nandigram’s farmers’ movement didn’t take any communal line. The communalism, inherent in the TMC and the BJP utilised the legacy of Nandigram. But neither Adhikari nor Bandopadhyay can claim the legacy of Nandigram but only its people.

It’s now the people’s responsibility to defeat the Hindutva fascist juggernaut that’s all set to destroy everything Nandigram epitomises. Adhikaris and Mishras, who use the so-called “secular” parties to launch their communal political career, must be politically defeated and routed, not merely in the polls. It’s important that Nandigram, holding high its legacy, defeat Hindutva fascism before it entrenches deeper to destroy its fabric. The history must repeat itself by ensuring Nandigram reclaiming its legacy.