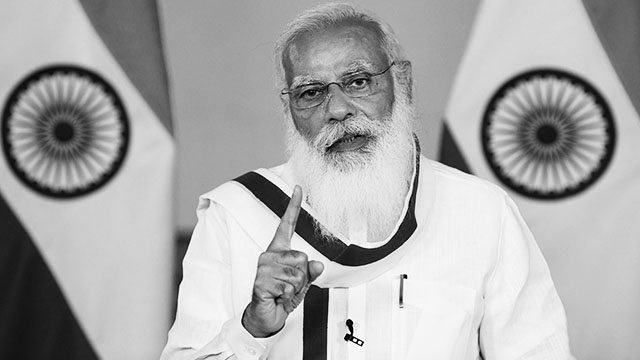 While the hullaballoo over the COVID-19 second wave is rattling India, the aggravating economic crisis is missing its place in public discourse. As the COVID-19 pandemic blisters and states try to combat it with lockdowns, there is a bleak scope for the economy’s recovery from the shock it got in the financial year (FY) 2020-21.

Last year, Prime Minister Narendra Modi marketed his “Atmanirbhar Bharat” (Self-reliant India) programme with extreme cacophony as a solution to India’s economic distress. However, apart from selling Indian public assets to Modi’s crony-comprador capitalist fundraisers, the “Atmanirbhar Bharat” scheme did nothing substantial and the repercussions of such a hollow programme can be seen as another intense economic crisis unfolds in India.

Despite the overenthusiastic propaganda over a purported Rs 20-trillion-worth recovery package, which had a very negligible amount of fiscal stimulus content, the dream of self-reliance, or even preparing its ground, remains a distant one.

A series of lockdowns, which Modi is calling the “last resort” now—after using the most brutal methods to impose a devastating one in 2020—to pass the buck on the States, will shatter the economy further, especially the unorganised sector that employs India’s 90% labour and was trying to recover.

It’s important now to first arrest the rising prices of petrol, diesel, cooking gas (LPG) cylinders and food articles to ensure that the people don’t get burdened with spiking inflation. Also, it’s important now to inject fiscal stimulus to revive the unorganised sector and help to create durable employment opportunities for all.

However, in none of the government’s communication, the issue of providing a fiscal stimulus has been addressed. The burden is passed on to the States, which must now manage both the COVID-19 crisis due to shortage of medicines and oxygen, as well as pay for the fiscal stimulus, like a cash-rich Maharashtra Government under Uddhav Thackeray is doing.

The Modi regime went on trumpeting that it increased expenditure by 28.4% to combat the COVID-19 crisis in the FY 2020-21. This means an increase of Rs 7.6 trillion-worth expenditure. But that wasn’t the case. If we deduct the prior dues, especially food subsidy bills, then the total increase in expenditure was only 19.4%.

Though the FY 2020-21 final GDP data isn’t released yet, Modi’s sycophant economists, the RBI and others projected the GDP to grow between 9.5% to 11% in the FY 2021-22, which would have filled the government’s coffers with taxes. But that isn’t going to happen as the second wave of COVID-19 is blistering epidemically and the entire state machinery is crumbling in dealing with the issue.

In such a situation, random decisions, gimmicks and using liquidity infusion instead of fiscal stimulus won’t help the Indian economy to survive. The need of the hour is a realistic and broad-based fiscal stimulus policy to help the people survive the crisis. Unless the Modi regime can announce one, and a genuine one indeed, there is no scope for India’s rescue from this ordeal.