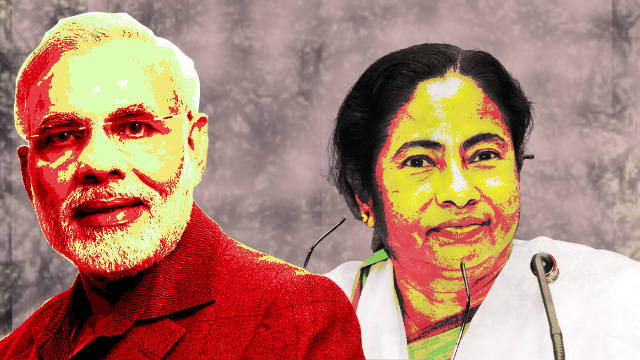 The high-voltage political drama that unfolded in West Bengal over Chief Minister Mamata Banerjee’s direct confrontation with Prime Minister Narendra Modi, is drawing the entire country’s attention. The Modi government has unleashed the CBI against the Kolkata Police Commissioner Rajeev Kumar, an IPS officer close to the chief minister, alleging his involvement in tampering with evidence in the Chit Fund Scam investigation to save the high and the mighty.

Mamata accused Modi of pursuing a brutal political vendetta against her due to her active role in uniting 23 opposition parties against the BJP’s fascist rule. She alleged Modi’s chief henchman Ajit Doval, the National Security Advisor, is micro-managing this raid, which she considers a threat to the federal structure of Indian polity.

The acting CBI in-charge, M Nageshwar Rao, dismissed the accusations and said that the CBI is doing its job and simply investigating Kumar’s alleged role in tampering with the evidence of the Chit Fund Scam investigation, which is now under the CBI.

Earlier famous corporate journalist and Mamata’s sycophant Suman Chattopadhyay and film producer Srikant Mohta had to face the CBI’s wrath for their involvement in the scam in which most of TMC’s bigshots are accused.

To save their boss from the ignominy of CBI arrest or questioning, which would have severely affected his leadership role in one of the oldest policing organisations of India, the Kolkata Police deployed its men at Kumar’s bungalow at Loudon Street to prevent the CBI men from entering it.

This unprecedented stand-off between two police forces of two governments, federal and union, has a very strong underlying message. Despite their collaboration on many fronts, the TMC and the BJP have locked horns over the share of power in West Bengal. The BJP is desperate to seize control of West Bengal and for that, it has adopted a two-pronged strategy.

Firstly, the BJP is trying to highlight the scams in which the ruling TMC and its supremo are involved to build up a massive public opinion against Mamata’s rule in West Bengal. By questioning the misgovernance, reign of terror, unapologetic corruption and nepotism promoted by the TMC in the state, at each level of the society, the BJP has filled the void of strong opposition, which the ailing parliamentary left couldn’t.

Secondly, the BJP employed the services of the RSS and Bajrang Dal men to build up a huge army of Hindutva fascist terrorists, who are used to instigate communal riots in the mixed population areas of the state and then by using those instances of violence and mayhem, the central government and its sycophants would accuse the state government of incompetence and “anti-Hindu” attitude, which will, on one hand, benefit the BJP in polarising the susceptible Hindu voters, while on the other, it will also give it a chance to dismiss the state government through Article 356 of the Constitution by citing the breakdown of law and order in the state.

Actually, Article 356 can be evoked by even citing the recent scuffle between the state’s police force and the central one. Though the Kolkata High Court has granted temporary relief to Kumar, but the situation can still be used by the Modi regime to dismiss the government and throw the state into utmost anarchy before the Lok Sabha election so that its own men can utilise the scenario and the clout on the government machinery to win a landslide majority in the state.

Mamata started her “Dharna” (demonstration) along with her close IPS officers at Metro Channel of Kolkata’s Esplanade, where, ironically, her own government had banned any sort of protests or demonstrations sometime ago.

Her Dharna drew instant support from almost all of those opposition parties that joined her on the 19 January United India Rally at Kolkata’s Brigade Parade Ground. The support of Akhilesh Yadav, Rahul Gandhi, Arvind Kejriwal, N Chandrababu Naidu, HD Devegowda, Tejasvi Yadav and others, cemented the opposition strongly and it seems that Modi’s plan to scare off the opposition with the CBI actually backfired.

Modi’s frustration with the lack of support base among the Bengali Hindu community was expressed during his recent rallies in West Bengal where he set communalism as the focal theme of BJP’s propaganda in the state during the Lok Sabha election 2019.

Though the BJP is trying to exhibit its relentless “crusade against corruption” under Narendra Modi, it’s forgetting that the people didn’t forget about the Mukul Roy, Mamata’s erstwhile most-trusted lieutenant and second-in-command in the TMC, who was rigorously questioned by the CBI repeatedly during 2014-15.

Roy was accused of being involved in the multi-billion-rupees scam and he was grilled for the investigation. The moment he joined the BJP and became one of its chief organisers in the state, the CBI investigations against him suddenly stopped. There is no news of his involvement in the Chit Fund Scam any more and this clearly shows how the raids are less about corruption and more about politics during the election hour.

Kolkata Police commissioner is merely the bait used by the BJP in its political chicanery to usurp power in West Bengal and destabilise the opposition unity by citing “corruption” allegations, which is abruptly used by the Modi regime to project all opposition forces as absolutely corrupt and dangerous before the voters.

Still, the way the Kolkata Police repelled the aggression by New Delhi’s “caged parrot” and attempted to “cage” it, can become a new role model for other state governments to thwart the aggression of the central government against the federal structure of the country.

However, it neither absolves Kumar and the TMC leadership of the corruption charges nor does it mean that the state government’s act of resisting the CBI was a revolutionary act, as the TMC is simply trying to protect its house from falling and not fighting against the injustices meted out to the people.

The people of West Bengal remember how the TMC leadership and government officials mothed the money of the common people looted by the chit fund companies like Sarada, Rosevalley, etc. They know well how the TMC leadership is plundering the state through syndicates, extortion networks and extreme corruption.

However, they also know that the Rafale Jet scam, LPG scam, crop insurance scam, etc, epitomise the BJP’s corrupt character and hence if they are determined to punish the ruling TMC they won’t spare the BJP either.

By destabilising the state government and by imposing president’s rule in the state, the BJP will only dig its own inevitable grave faster. The people of West Bengal have a legacy of impressive struggles against exploitation and oppression, and the Modi regime’s iron fist approach will not be tolerated by them for long.