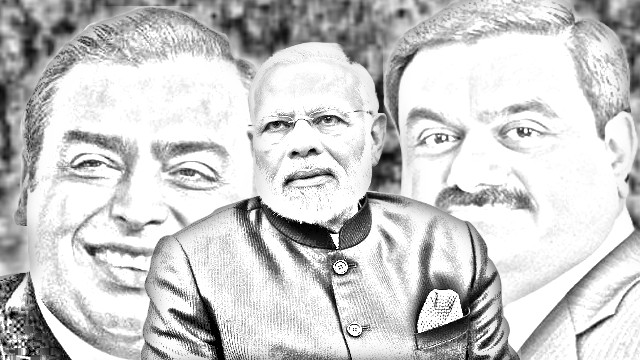 The swearing-in ceremony of Prime Minister Narendra Modi was as spectacular an event as his thumping victory in an election whose result was so scripted that it didn’t surprise anyone. With his masters, Mukesh Ambani, Gautam Adani, Ratan Tata, etc, crowding the venue, along with dubious godman and usurers like Isha Foundation’s Jaggi or Sadhguru, filmstars infamous for their insidious propaganda against the Muslim community and India’s democracy, everyone was there. Amid them, like true showbiz, like a mesmerising pied piper of Hamilton, Modi took an oath, which each of his opponents knows he’ll never fulfil. The spectacular event showed who all are aligned together to consolidate Modi’s and his Bharatiya Janata Party’s (BJP) rule over India. It was an optics to prove who all own the government and who all will be its sycophant mouthpieces.

If Narendra Modi or his mentor organisation — the Rashtriya Swayamsevak Sangh (RSS) — can be credited for something then it will be the ability to create a propaganda enterprise that has captivated the minds of the majority community transcending caste and class divisions. Modi, who was projected as an honest, sincere, hardworking, pro-poor and strong leader, is actually a hollow puppet, part of a project to establish a monarchical dictatorship in India. Yet, backed by strong Goebellian propaganda, built around a masculine hyper-nationalist theme and around optics of purported military supremacy against Indian government’s arch-rival Pakistan, got the best of the minds to fall for it. This unique and gargantuan propaganda machinery gripped India’s concise and vilified anyone or any idea that strongly opposed Modi’s vision of a divisive society.

With this swearing-in ceremony of Modi and his cabinet, which paraded a galaxy of hate mongers, rioters and mass murderers, India’s journey towards its nemesis — a Hindu Rashtra — the Hindutva fascist state, started officially. The journey towards officially anointing the likes of Adanis and Ambanis as the rulers of India has started. It’s only a matter of time that the country’s Constitution, which Modi and his coterie promised to uphold and protect, will be changed. Yet, the mass mobilisation against such conspiracies, against such heinous schemes is missing at the grassroots as the fractured and disarrayed opposition has no plan or ability to take up the mission to uproot the fascist regime because the mainstream opposition parties are somehow party to this conspiracy of establishing a Hindu Rashtra. They are drooling for crumbs from the ruling classes, from Adani, Ambani, and their foreign corporate masters, to flow into their coffers as well, and these parties can sell out anything for such crumbs. The masters are generous, they will fill everyone’s coffer to keep their reign go unchallenged.

This swearing-in ceremony has thrown a big challenge to them who are actually resisting or building mass movements at the grassroots to detoxify the Hindu majority’s mind captivated by the Hindutva fascist propaganda by the BJP and the RSS, to purge the filth of communalism, and to bring down the Hindutva fascist rule to its knees. It’s evident that in a few days, the juggernaut of Hindutva fascist exploitation will crush the poor with a huge burden of exploitation, fuel communal tensions to distract the people and sell off India’s resources to big corporations, domestic as well as foreign. The democratic, progressive, leftwing and anti-fascist forces will have to intensify their efforts using their meagre resources to build up movements against each of such anti-people schemes at the grassroots and sustain such movements with the help of agitprop that can awaken, unite and organise the poor transcending caste and communal lines to build up a massive resistance struggle. A united body of all democratic, progressive and anti-fascist organisations must be founded to thread all smaller struggles to form a large-scale movement against Hindutva fascism. History has evidence that tyrants, irrespective of the strength of their sycophants, can’t rule a state fooling and suppressing the people for long. Modi and the BJP will also face their nemesis — the united and awakened poor — pretty soon if the forces of resistance can really build a massive movement.