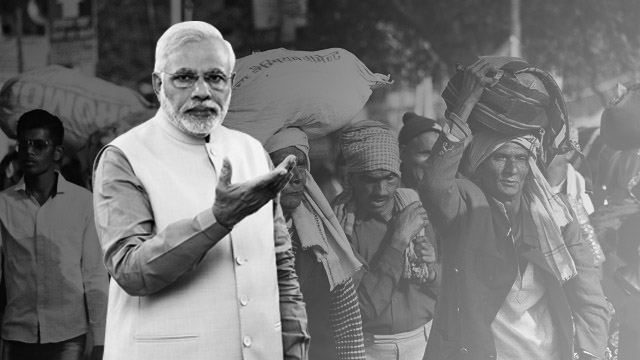 As the “unlock” season started after the Ministry of Home Affairs issued new guidelines, the question that must be asked assertively now to the government is whether Prime Minister Narendra Modi’s COVID-19 lockdown achieved any of its desired results or added another feather of misrule in the narcissist emperor’s hat? Bigger than the demonetisation drive, the lockdown has unravelled India’s dark underbelly, so far criticised in a hushed tone.

A lockdown was never an answer to the COVID-19 crisis and the government’s failure in flattening the curve of infection proves it. While China’s Wuhan city was the epicentre of the COVID-19, the situation was brought under control and the curve was flattened within a period of two to three months. China has gradually returned to normalcy and its economy is turning back swiftly. During Modi’s lockdown, the government didn’t do anything remotely similar to the Chinese measures. Even the Modi regime couldn’t achieve the level of success achieved by the southern state Kerala.

Modi’s COVID-19 lockdown unleashed an unprecedented humanitarian crisis in the country of 1.3 billion people – a first of its kind in the world during this period. The crisis that unfolded with the mass exodus of the “migrant workers”, exposed and widened the grotesque socio-economic fissures in the class-caste-divided Indian society.

The Modi regime’s nonchalant attitude towards the poor people’s plight highlighted its anti-poor character. The institutional genocide of the migrant workers, through starvation, railway track accidents, road accidents and health conditions that worsened due to lack of nutrition, while walking hundreds of miles from the cities they worked in towards their native villages, often facing the repression unleashed by the state machinery, including police’s baton charge and chemical fogging, show who owns Modi’s “New India”.

After killing numerous poor people during this lockdown, including 80 workers travelling in the much-hyped “Shramik Special” (workers’ special) trains, the Modi regime has purportedly rebooted the economy with “unlock” drive, which will go parallel with lockdown’s fifth stage. This arbitrary “unlock”, like the lockdown, is raising serious doubts about its goals. Did India achieve any success during Modi’s COVID-19 lockdown that the “unlock” is mooted? Or has the Modi regime given up already?

If it had achieved any success – and there is none except flattening of the curve – then why has the number of COVID-19 infections reached 189,765, at the time of writing this article, with 5,390 deaths? If a stringent lockdown was necessary when there were 564 infections with a very few deaths on March 24th, then why isn’t it necessary now when the number is nearing 200,000 with nearly 6,000 deaths?

The answer to this question is that Modi’s COVID-19 lockdown is neither a planned one nor a scientific one. His government simply imitated the measures taken by the western countries to arrest the growth of infection at the early stage. Their failures, and the US’s promotion of the inhuman herd immunity notion, have made Modi to put economy above public health. Thus, his toady press is trying to create an opinion in favour of the herd immunity concept as well as jeering a risky “unlock” without asking for safety riders.

One must remember that the urban elites were the initial carriers of COVID-19 in. The fear of these classes getting infected made Modi impose an ill-planned lockdown on March 24th. But with time, after their businesses started suffering worse than the pre-COVID-19 crisis, and when a large batch of their workers started marching home, the scared crony-comprador capitalists requested the government to relax the lockdown to ensure their workers can continue to work and enrich them with their labour, sweat and blood. Hence came the “unlock” phase. The one India will live from June 1st in absolute confusion.

A herd immunity implementation in India, where people don’t manage to get enough to eat twice a day, is a suicidal one. Even the World Health Organization called it “dangerous“. Dr V Ravi, Head of Neurovirology, National Institute of Mental Health & Neuro Sciences and Karnataka Health Task Force for COVID-19’s nodal officer, has projected that community transmission will start soon. Dr Ravi also said that nearly half of India’s population, ie, nearly 650m, will be infected by December 2020 and 5% of the cases will need ventilator support.

Though the percentage seems low, the number is 32.5m people, which is double the population of Delhi or Mumbai. In a country with a poor public healthcare system, fewer doctors per 1,000 people and lesser number of hospital beds per million population, the idea of pushing people into herd immunity experiment can be a public health disaster. A country with 32.5m infected COVID-19 patients needing ventilators and 650m suffering due to the acute respiratory syndrome, isn’t going to be an economically viable place for the very capital Modi and his coterie are wooing.

Modi’s COVID-19 lockdown has failed and the frantic “unlock” without proper safeguards, without enhancing India’s testing, tracing and treating capability, peddling the “herd immunity” propaganda, imitating the US and the UK, both ruled by hardcore fascists, will be catastrophic for India. All that the country needed was proactive testing and public healthcare system rather than a paranoia at the very beginning. Right now, as the COVID-19 has become a nightmare, the very paranoids are downplaying its impact. Irony’s party time.