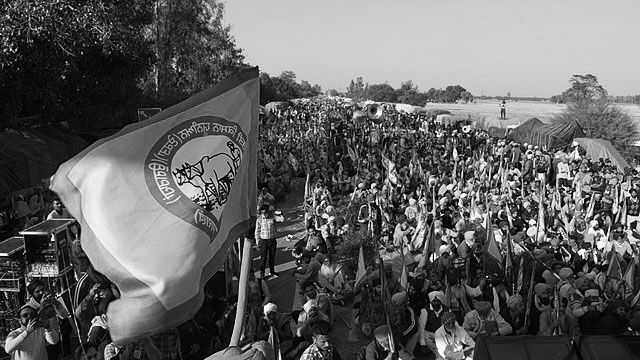 If Paul Joseph Goebbels was alive in 2020, he’d have felt proud of India’s mainstream press’s expertise in peddling lies, incessantly. News18 channel has claimed that its survey shows the majority of Indians support the contentious farm reforms launched by Prime Minister Narendra Modi’s Bharatiya Janata Party (BJP), which the farmers of several states are opposing. The News18 survey on farm reforms also found that the majority of people oppose the farmers’ agitation. This is one of the funniest things Modi’s toady press has done in recent times.

News18 is a Network 18 company. The Network 18 conglomerate is owned by Modi’s biggest donor and patron Mukesh Ambani’s Reliance Industries Ltd (RIL), whose subsidiary Reliance Retail Ventures Ltd (RRVL) and JioMart have been biggest beneficiaries of these contentious farm acts. In reality, the News18 survey on farm reforms, which had 2,400 respondents from 22 states, is a desperate attempt by RIL to whitewash the Modi regime’s and the BJP’s vile attempts to sell-off farmers’ interest to appease corporate greed and lust.

Ambani’s RRVL gained immense foreign investment and acquired Kishore Biyani’s Future Group’s retail venture, despite global e-commerce major Amazon’s objection, to become the largest brick and mortar retail brand. Plus, it used JioMart to expand in the e-commerce space to become a giant entity, controlling each aspect of retail trade. With the help of the two contentious farm laws, which allow liberalised trade and commerce of crops across states and corporate farming, along with the anti-people amendment to the Essential Commodities Act, 1955, RRVL is trying to establish an oligopolist system in India’s retail food market.

Before the News18 survey on farm reforms became public, the BJP has been saying that the movements don’t represent the farmers of India and the agitators are “politically-motivated”. Ambani’s News18 is trying to peddle the same narrative by making it appear more reliable and backed by data. In case of a survey-driven report, there is always an essence of authenticity, which makes it lucrative.

The nationwide survey by News18 must have costed a fortune. Media houses don’t go for surveys unless they get sponsorship from corporate clients. The surveys help the clients of media houses to place their products in a better place or to set narratives that will help their brands grow. No survey is conducted just for the sake of information and, when the media house is owned by Ambani, it’s unlikely that the News18 survey on farm reforms wasn’t conceived to create a deceptive optics regarding one of the most popular movements of the 21st-century India.

Now the News18 survey on farm reforms can’t afford to have shown the reality of public opinion regarding the farmers’ discontent. The public support for the movement is growing at a phenomenal rate despite the Modi regime’s attempts to vilify it and label it as “anti-national”. The agony of the farmers has cast a gloomy shadow on the political fortune of the BJP, especially in northern states like Haryana, Punjab, Rajasthan and Uttar Pradesh. Farmers of Maharashtra, Odisha, Telangana and West Bengal have also shown their support for the farmers’ movement in Delhi. Such is the pressure that Modi himself had to visit a Gurdwara in New Delhi to woo the Sikh community, as most of the farmers from Punjab are Sikhs and the highest Sikh body of the community is supporting the movement.

In such a stressful situation, when an ominous silence is prevailing in the government’s camp, when Agriculture Minister Narendra Singh Tomar has confined his role in offering banal proposals to the farmers, when Home Minister Amit Shah’s attempt to split the farmers’ movement failed, when the BJP’s dreaded IT Cell’s boisterous cacophonic vitriol against the agitation failed to tilt public opinion, the News18 survey on farm reforms is one of the frantic and ridiculous attempts by the RIL-owned entity to incite the middle-class against the farmers. But the bubbles of such propaganda bursts fast, leaving Ambani and his lackey, the BJP, in sheer ignominy.

Surpassing Goebbels’s record in building narratives on sheer lies, Modi’s toady media houses have been shamelessly peddling lies to hoodwink the masses. The News18 survey on farm reforms is one of such latest attempts. Goebbels would’ve felt proud if he had foreseen how his work will be developed by the Indian press, 75 years after he had to commit suicide fearing reprisal. But it’d be better if the same press recalls how the Nazi propaganda machinery ended.