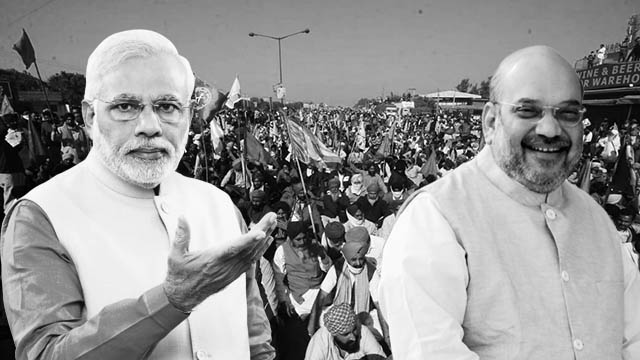 Prime Minister Narendra Modi’s Bharatiya Janata Party (BJP) is ignominiously caught unaware by the massive farmers’ movement against agriculture reforms. The agitating farmers are laying an unprecedented siege of capital New Delhi by blocking important highways connecting it with the rest of India. Their demands of scrapping the anti-farmer laws and providing a legal guarantee to the minimum support price system have thrown a severe challenge to the Modi regime.

Nearly one million farmers from Haryana, Punjab, Rajasthan, Uttarakhand and Uttar Pradesh, belonging to 40-plus organisations, carrying their ration that will last for months, created an unprecedented optics that has become a bane for the Modi regime and has shattered the halo of invincibility around it. Modi’s assurances, the BJP’s vitriolic propaganda against the farmers and Home Minister Amit Shah’s attempt to pit one farmer group against another, Sikhs against Muslims and Hindus against Sikhs, failed so far to yield any result. The question is not how long the farmers’ movement can continue, rather, how long the Modi regime can survive the farmers’ perseverance?

The farmers are demanding the unconditional scrapping of two contentious laws— The Farmers’ Produce Trade and Commerce (Promotion and Facilitation) Act, 2020 and The Farmers (Empowerment and Protection) Agreement of Price Assurance and Farm Services Act, 2020—along with the amendment to the Essential Commodities Act, 1955, so that the corporate aggression on farming can be thwarted. The Modi regime can’t repeal these laws as they are imposed by the World Trade Organization (WTO) and serve the interests of the BJP’s biggest donors like Mukesh Ambani and Gautam Adani.

If the BJP capitulates to the farmers’ movement against agriculture reforms then it will end up offending the big corporate houses as well as the WTO; if it doesn’t then its parent body, Rashtriya Swayamsevak Sangh (RSS), the epicentre of global Hindutva fascist movement, will lose not only its bases among the farmers of Haryana and Punjab, but will also end up antagonising the Sikh community, which it has been trying to include into the fold of “Hindu” identity by using Islamophobia.

Moreover, as the government is criticised globally over the farmers’ movement against agriculture reforms, due to the global presence of the minority Sikh community of Punjab, and as its options of hoodwinking the farmers with different baits, to distract them from their core demands, even using the Supreme Court, are running out, there is a chance that the Modi regime may unleash state violence to suppress the movement. However, as direct police violence against the unarmed farmers backfired earlier, the BJP may use other tactics now.

Firstly, the BJP is bringing up one after another group of self-styled farmers or feudal landlords and rich farmers affiliated with the RSS-led bodies, as supporters of the farm reforms. Though many are backtracking on their comments later, the BJP is trying to project that the agitating farmers aren’t representing all farmers and that “real farmers” are supporting the reforms. Even Modi has been incessantly saying this and blaming the Opposition for raising the bogey of farm reforms.

Secondly, the BJP and the RSS have used their propaganda platforms and proselytisers to label the farmers’ movement against agriculture reforms as a handiwork of “Khalistani” elements, “Maoists” and even a Pakistan-sponsored event. But this plan didn’t work as the farmers brought counter-narratives, especially calling the Modi regime an Adani-Ambani-sponsored enterprise.

Lastly, the BJP can trigger an anti-Muslim pogrom either in volatile western Uttar Pradesh or Haryana, where the feudal landlords and rich farmers, despite their participation in the farmers’ movement against agriculture reforms, are hardcore Brahminical supremacists. An anti-Muslim pogrom will help the BJP and the RSS to gain mileage and divide the farmers’ movement against agriculture reforms.

Some of the farmer leaders, like Rakesh Singh Tikait of western Uttar Pradesh, whose faction of Bharatiya Kisan Union (BKU) had been complicit in the Muzaffarnagar anti-Muslim pogrom of 2013 and most of its upper-caste feudal landlord and rich farmer members from the region were involved in the killing, raping and evicting Muslims, recently showed their true colours by playing to the BJP’s tune. Tikait’s BKU men strongly opposed the students from Delhi’s Jamia Millia Islamia University, who went to express their solidarity for the farmers at Delhi’s Ghazipur border.

Tikait’s BKU men accused the students of being complicit in “breaking India”, following the narrative set by the RSS and its media outlets, and refused to have a dialogue with them. The Islamophobic ranting by these feudal landlords and rich farmers of Uttar Pradesh is diametrically opposite to the warmth exhibited by the farmers from Punjab and parts of Haryana, who not only have been engaging with Muslims, civil society members, rights activists and leftwing forces, but are also demanding the release of all political prisoners.

Though Tikait and his men are not the determining factors of the farmers’ movement against agriculture reforms, the BJP’s careful manoeuvring and Modi’s toady media’s hyper-activism can trigger communal violence, either in the region or far away from there. The BJP has states like Assam, Kerala and West Bengal, especially the last one, on its radar for fuelling anti-Muslim pogroms to polarise the Hindus before the crucial 2021 assembly elections. Any such action will draw all focus away from the farmers’ movement against agriculture reforms and Hindu-Muslim dichotomy will again become the dominant narrative in Indian politics.

It’s crucial now that the farmers’ movement against agriculture reforms remains united against the common enemies, doesn’t budge to the pressure exerted by the Modi regime and its intimidations, and doesn’t retreat on any demand. To do so, the movement needs to pre-emptively strike and destroy all conspiracies hatched by the Modi regime and the BJP-RSS. It must keep striking at the corporate-WTO nexus and must expose the Modi regime’s servility towards such forces. Unity, perseverance and determination to realise the goals are the essential factors based on which this movement can survive and win.