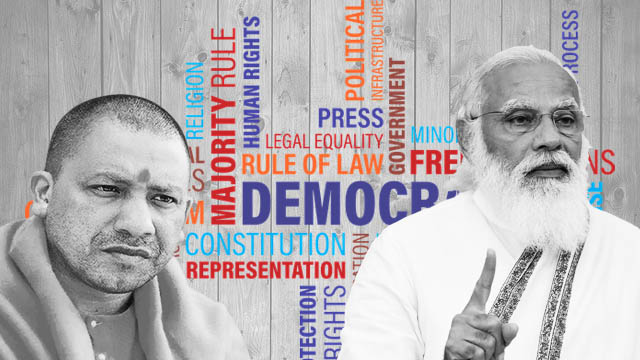 The Indian Express reported the Ghaziabad Police charged the social media platform, under various IPC sections like 153 (provocation for rioting), 153A (promoting enmity between different groups), 295A (acts intended to outrage religious feelings), 505 (mischief), 120B (criminal conspiracy) and 34 (common intention). What did these people and organisations, especially the social media platform Twitter India, do to attract such charges?

They reported the gruesome Hindutva fascist assault on 72-year-old Abdul Samad Saifi at Loni, Ghaziabad. The attackers forced Samad to chant Hindutva war cry “Jai Shri Ram” (hail Lord Rama) and chopped off his beard. Saifi lodged an FIR against the perpetrators on June 7th. In a video that went viral, Saifi alleged he was attacked for his religious identity.

A video of the attack, sans sound, was tweeted by Ayyub, Zubair, Congress party leaders like Salman Nizami, Maskoor Usmani and Shama Mohamed, writer Saba Naqvi and others. This video too went viral, causing embarrassment to the Uttar Pradesh Police and the Yogi regime.

Acting as an extended arm of the Rashtriya Swayamsevak Sangh (RSS)—the paternal body of the ruling Bharatiya Janata Party (BJP)—to save Yogi from embarrassment, the Uttar Pradesh Police jumped into the fray. Rather than cracking the whip on the perpetrators, the Ghaziabad Police published a statement that made Saifi responsible for his fate.

The police narrative claimed that Saifi sells tabiz (amulets). Some men who bought such tabizs from him wanted a refund as those amulets didn’t give the desired magical results Saifi promised. The police claimed that Saifi was thrashed as he didn’t refund. The Ghaziabad Police named a few Muslims as accused to brush off the claim of communal violence. The Wire reported that the police claimed Saifi ‘had not been forced to chant “Jai Shri Ram” slogans and that it was not a crime done by “random strangers” but his “upset” customers.’

To leave nothing to chance, the Yogi regime went ahead and ordered the police to book those who have been demanding justice for Saifi. Following this order, Loni Border police station’s sub-inspector Naresh Singh filed the complaints naming Ayyub, Zubair, Nizami, Usmani, Mohamed, Naqvi and even The Wire and Twitter–both the social media’s US-based headquarters and the Indian entity based in Gurgaon. The Ghaziabad Police’s recent FIR exhibits the BJP’s fear, one year before Uttar Pradesh goes to polls. It wants servility and no questions or criticism.

Prime Minister Narendra Modi claimed at the recently-held G-7 summit that “democracy and freedom were a part of India’s civilisational ethos”. This claim was ridiculous at a time when his BJP and the RSS-led administration are unleashing attacks on those who dare to criticise the government. The prime minister, ironically warned that “open societies are particularly vulnerable to disinformation and cyber-attacks.” The prime minister never faced the press since 2014. He cares a lemon about democracy and freedom.

No wonder, despite India signing the Open Societies Statement, promising to uphold “free speech”, the Modi regime keeps unleashing terror targeting journalists, opposition and critics. The arrest and inhumane detention of Siddique Kappan, who was arrested while he was covering the macabre gangrape and murder of a Dalit teenager in Hathras, the FIR against journalists like Pawan Jaiswal for reporting salt-roti meal in Uttar Pradesh schools, FIR and detention of Prashant Kanojia, show that the BJP has no penchant for press freedom or freedom of speech.

No wonder, the Modi regime decided to curb the critical press and journalists back in 2020 when India was in an abysmal crisis due to the unplanned, nationwide lockdown imposed by the prime minister. No wonder the government is trying to coerce even a social media platform like Twitter to become the RSS’s extended arm and curb free speech. As India’s position in press freedom is falling every day, the Ghaziabad Police’s recent FIR nails the coffin of the last remnants of what was called democracy. The impending official inaugural of the Hindutva fascist state can only happen on the ruins of the free press and the people’s rights.