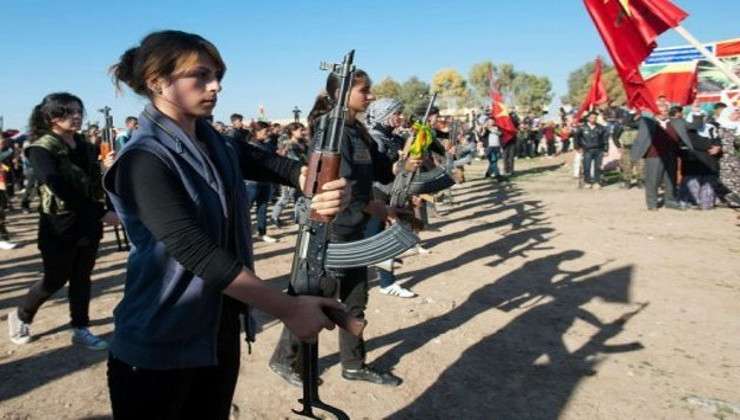 (This article was first published in January 2016 in the previous version of People’s Review. Due to an incident of hacking the old website was pulled down and we could only restore the old articles in this section)

The U.S. government has made claims on it being the super power of the world, rejecting claims of economic crisis made by the Republican contestants. President Obama, while defending the policies of his administration also claimed that the U.S. is strongly fighting the Islamic State militants in Syria and Iraq along with its NATO partners, a claim made to downplay the role played by the Syrian and Russian forces in combating the menace of the ISIS and its fraternal organisations like Daesh, al-Nusra, Free Syrian Army and other such Western puppet forces.
The fact that the U.S. and its NATO allies along with Zionist Israel has played the most crucial role in funding and building up the Islamic fundamentalist forces in Middle East Asia, especially to destabilise the Syrian government led by President Asad and overthrow the legitimate government by force, is now covered with more deception and lies propagated by the corporate media funded by the monopoly and finance capital giants of U.S. and Europe.
The corporate media is working as a puppet of the U.S. and its NATO allies along with the arch-reactionary regimes of Israel, Turkey and Saudi Arabia to belittle the role played by the Russian and Syrian government in the war against the terror forces in Syria.

The corporate media of U.S. and Europe along with their subsidiaries in Asia -Africa and South America are replaying the same role that they played during the notorious U.S. and British aggression on Iraq in 2003. The corporate media played the crucial role of building up mass opinion against the government of Saddam Hussein by carrying out blitzkrieg attack on his government, building their entire campaign on the foundation of lies and deception.
Since the beginning of the Russian military involvement in the Syrian conflict since September 2015, the corporate media all over the world has tried to depict the involvement of Russia in the war as an evil design, aimed at destroying the attempts to ‘free Syria’ and Russian Air Force is often blamed by the Western and regional press of violating human rights or killing innocent civilians.

Recently the Russians carried out an attack against a kangaroo court and jail operated by the al-Nusra and its accomplices, which nearly killed 100 terrorists operating in the area.
This incident irked the U.S. – Israeli and Western-funded terrorists along with their corporate media mouthpiece so much that they started an agitation all over the world calling the strike on al-Nusra a barbaric attack on the ‘freedom fighters’.
While the attack was launched in the very Idlib province of Syria, which is occupied by the terrorist Fatah Army coalition – which includes al-Nusra Front, Jund al-Aqsa, Jaish al-Sunna, Liwa al-Haqq, Ajnad al-Sham, and several other factions.

The Western capital funded major terror bloc, the Syrian National Coalition, said in a report that it had documented the deaths of 1,730 civilians due to Russian air strikes since their launch in September 2015.
Playing the victim role, they said that at least 135 children were among those killed, adding that over 29 hospitals were destroyed in the strikes in addition to schools, homes and places of worship.

The terrorist coalition called on the UN Security Council “to assume its responsibilities towards Russians’ continued violation of international and humanitarian laws”. A call that is aimed at their masters in Washington, Paris, Berlin and London to save the terrorists from the joint assault of Moscow and Damascus.

The terrorist forces of the Syrian National Coalition, which recently got more funding from Saudi Arabia, Qatar, Bahrain, UAE, Israel and Turkey; accused Russia of carrying out an aggression on the Syrian soil and claimed that -“nearly 94 percent of the 12,000 sorties the Russian air force has so far flown in Syria targeted civilians and the Free Syrian Army”.
These butchers on the payroll of Western powers trying to seize power in Syria to plunder its petroleum resources and turn the secular and modern Syrian society into a barbaric Islamic theocratic state, has tried their best to cover up the fact that the Russians, unlike the Americans, French, British or Turkish forces has not invaded Syria unilaterally, rather they participated in the Syrian conflict due to the request made by the legitimate government of the country.

The hypocrisy of these so-called forces of freedom that actually aims to impose the fascist religious theocratic forces on Syria and divide the nation among sectarian lines like Iraq, is visible from their total silence and lip service to the aggression of the British-French-American-Turkish forces upon Syria, whose attacks have targeted more civilians and Kurdish resistance forces than any real ISIS base.

The increase in the uproar against the military campaigns of Russian and Syrian coalition manifests the crisis of the terrorists funded by the Western forces along with the U.S. and its puppet Gulf monarchies. The strong military might displayed by the coalition fighting a just war against the terrorists has recently made the Saudi monarchy to hastily declare the formation of an Islamic coalition to fight ISIS to divert mass attention from their failure in Syrian campaign.

The Syrian people are giving a befitting reply by strongly opposing the aggression of the Western forces carried out by their puppet forces, cahoots with the Islamic reactionaries who are aiming to reverse the socio-economic progress of Syria to the dark ages of religious bigotry.

The moaning of the terrorists and their foreign handlers through their corporate media platforms will not yield any result in the modern day due to the pivotal role played by the very Syrian people in this war against the forces paid by U.S. – Israel and their allies. The corporate media may be able to fool the people of other regions but not of the Syrian people who are holding the lever of the war in their hands. The Syrian people, the Syrian government, the Kurdish forces and the Russian forces will certainly be able to destroy the last remaining terror forces funded by the Western capital. The future of the ISIS and its allies in Syria is doomed.