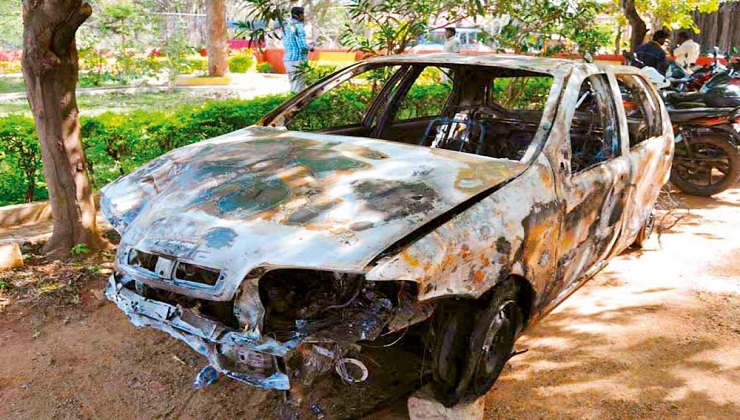 The barbaric attack on a Tanzanian female student and her friends in Soladevanahalli, Bangalore North Taluka, on the night of 31st January has reconfirmed the insecure environment that prevails in India, especially for women. Despite her repeated pleading, the furious mob thrashed the woman, stripped her and made her parade naked on the street. The student of Bachelor of Business Administration in the local Acharya College was not offered any protection from the police force, which stood there as mute spectator of the gruesome event.

The attack on the Tanzanian girl on Sunday evening had a racial angle involved in it, which is a manifestation of the feudal practice of publicly molesting and stripping women, a common occurrence in the feudal countryside where every now and then women of oppressed classes, communities, or castes and tribes face such atrocities.

A Sudanese national ran over a woman, a local resident, while driving and fled from the scene on Sunday. The car carrying the victim and her friends arrived there 30 minutes after the incident. The victim and her friends were unaware of the incident, and as their car was passing bystanders accused them as the accomplices of the Sudanese driver. The mob stopped their car, pulled them out and set the car ablaze. The friends of the victim were beaten badly and their money and mobile phones were snatched by the mob. The victim was stripped and forced to walk naked on the street, as a man offered her a t shirt to save her modesty, he was thrashed too. The humiliated and injured victim tried to board a bus, but the passengers threw her back to the mob, who kept on assaulting her.

The police force did nothing to protect her and her friends; rather they too passed racial slurs at the victim and kept supporting the mobsters.

According to the Tanzanian girl the police even refused to lodge her complaint, rather they asked her to bring the perpetrator of the crime first to have a case registered. Only after a strong protest movement by African Students Union, did the police lodged a complaint on Wednesday 3rd February. The Police Commissioner of Bangalore denied the reports that the Tanzanian girl was stripped and forced to parade naked on the streets by the mob.

The atrocities on the African people along with the people of North East India are on rise in the cities like Bengaluru, Delhi, etc. Racial hatred of the upper caste Hindu society, which is undergoing a fascist indoctrination in a renewed fashion under the BJP rule, has further worsened the situation. Earlier the incident of Delhi’s AAP minister’s attack on African women from Uganda made the headlines. The minister blamed the women of prostitution following the common stereotype that prevails in the metro cities regarding the African people.

In Bengaluru and Delhi the students who come from affluent families of Africa and North East India are stereotyped as drug peddlers, weed smokers, and the women are often labelled as prostitutes. The women of African and North East Indian origin are more often victims of sexual violence and lewd comments of the mainstream upper caste Hindu society that has supremacy in these cities.

Though the police wants to portray the violence against the Tanzanian girl in Bengaluru as a spontaneous act of violence, however, the evidence and the flow of events testify that the event was a carefully planned racial attack, which was particularly targeted against the African students in general due to their race, and is a an act of racial violence.

The attack with racial profiling and the brutal violence on the Tanzanian girl is done because of the dark complexion of the victim. If the accident would have happened by a car driven by a white Caucasian man, it is unlikely that the mob would attempt to beat and molest another white woman to avenge the incident. Neither would have the police allowed any public attack, unlike the case of the Tanzanian girl, to have happened in case the victim was a white woman. This brings out the clear picture of a racially intolerant society, which hates and tries to subjugate the coloured people from economically weaker countries.

The African governments cannot argue with Indian government and call for a protection of their people as would a European or North American country do. The economic disparity between nations in the modern times has grown wide due to the uneven development of capitalism, the concentration of wealth in the hands of few imperialist countries and the widespread poverty and destitution in the countries of Asia-Africa and South America. The racial supremacy of the rich countries has always prevailed in the world; the upper caste affluent Indians face similar treatment when they visit Western countries like USA or the UK.

The semi-feudal production relation that forms the major base of the Indian economy is the root of the communal, casteist, racial and gender violence in India. As most of the affluent city dwellers emerged from the higher echelons of the feudal society, they carry with them their feudal outlook even when they claim to have subscribed to modern lifestyle.

Even after thousands of years of Aryan occupation of India, the white supremacy still exists in the DNA of the upper caste Hindu society of the country. The advertisements on the matrimonial columns in the country can show how the upper caste affluent society is still a white skin fetish society, especially in the matter of women. There cannot be any radical change in the racial environment of the country, unless the base of the problem, i.e. feudalism is overthrown from the rural hinterland of the nation. Till that time the curse of racial and communal hatred and apartheid will continue in the country, even if we hate it, we will have no easy way to do away with these evil forces.