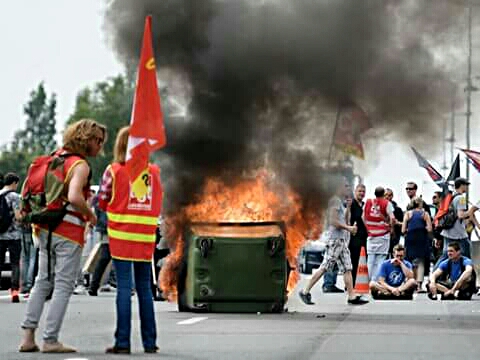 (This article was first published in June 2016 in the previous version of People’s Review. Due to an incident of hacking the old website was pulled down and we could only restore the old articles in this section)

Since the Nuit debout movement in March, France has erupted in protest against the anti-working class reform measures initiated by the self-styled “socialist” president of the country, Hollande. The initiative of watering down the hard-won labour rights and mount heavier burdens of exploitation on the working people of France triggered large-scale militant struggle of the working class. The intensity of the struggles across different regions of the country like the capital Paris, Nantes, Lyon, Marseille, and Toulouse, brought the memories of Paris 1968 back, with many media houses calling it a sequel of the half-century old historic event.
Despite the strong anti-government working class movements stemming up all over the country, the French Prime Minister, Manuel Valls, said that the government will not back off from the track of reforming the country according to the guidelines of liberalism issued by the World Bank-IMF-WTO-ECB nexus. The Socialist Party of Francois Hollande is split on the policy of globalisation, with the majority of the right-wingers like Hollande supporting the neo-liberal economic discourse and a small section of the leadership opposing the liberalisation drive with rhetoric mongering. The largest trade union of France, CGT, has locked horns with the government over the proposed measures. The social democrat government of Valls and Hollande provided €4 billion tax cuts to the big corporations to prove their loyalty to the international brigade of finance and monopoly capital. Hollande is hoping to get re-elected to his office next year by serving the interest of the corporates.

However, his failure in repressing the people is cited by the fascist Le Pen, who managed seven million votes last year, as a failure for which her party should get a chance to rule the country with the iron fist of Mussolini and Hitler.
The new proposals that the US camp member Hollande is all set to implement, calls for easing the policy of hire and fire and dismantling the regulations on labour rights. The government is claiming that the increasing unemployment graph is forcing it to ensure that a greater portion of the unemployed people could get employment through the liberal measures, the unions accuse, and quite rightly accuse, the government of easing the process of firing employees than making avenues for employment. France currently has 24 per cent unemployment with 46 per cent unqualified unemployment. The critiques of the Hollande regime has shown that similar measures in different countries, including the semi-colonial countries of Asia-Africa-South America have rendered people to work like semi-slaves for a meagre pay. The French workers need a minimum wage that can provide them support to deal with high inflation and rise in the cost of living. The dismantling of the labour laws will also affect the social security measures available to the working class, though at the most minimal level. It will turn them into a modern Britain, where the working class has lost all, but few of the rights their predecessors have won fighting a tough battle with the capitalist classes.

The CGT union along with several other small and medium working class organisations rallied the people on the streets and in strike actions against the government policies. The railway workers went on strike, the students agitated, many factory workers rallied on the streets calling for the scrapping of the monstrous proposals of Hollande. The Socialist Party kept reiterating its commitment to the cause of the workers and the benefits of the new regulations by calling it a pro-worker policy as a futile attempt to sabotage a struggle that expressed the hatred of the French people against the policies of globalisation and liberalisation. The opportunist left-wing within the ruling clique and outside tried to link the heroic struggle of France with the contemporary Syriza in Greece and Podemos in Spain. They intend to ensure that the French working class struggle of 2016 could be channelised into opportunism and electoral gimmicks following the cue from a cunning leader like Tsipras.

It is a fact that the leadership of the entire anti-government struggle in France is retained by the hardcore anti-communist opportunist forces, who will use the militant struggle to bargain with the government for a better share of the booty and lead the people to astray. Still, the militant movement is significantly expressing the level of frustration of the working class in one of the advanced economy of the world and how like their fellow compatriots against the monopoly and finance capital in the countries of Asia-Africa-South America, they too are demanding an end to the neo-liberal economic policies and resisting attempts to impose them on their class. The struggle of the working class can only bear fruit against the monopoly and finance capital if it is lead by the revolutionary politics and force that intends to bring a radical and drastic change in the society. Until then the struggle of the working class of France will only face betrayals from their leadership and those who claim to represent the working class, like Hollande & Co.