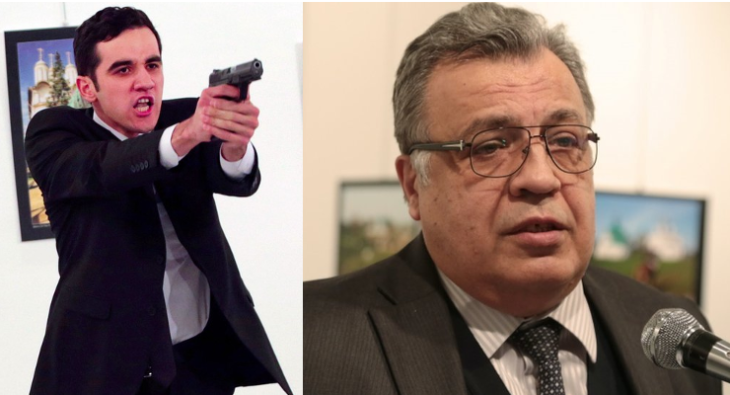 The Russian Ambassador to Turkey Andrei Karlov (62) was shot dead by an off-duty Turkish policeman Mevlut Mert Altintas. This is already a news and apart from Russia, even many politicians in the West did condemn the murder, which was not an act of random terrorist attack on the diplomatic staff but a very well planned political assassination planned by the powerful forces of Turkey and its international allies.

Andrei Karlov happens to be the first Russian diplomat to be killed after the anti-communist zealots gunned down Soviet envoy to Poland, Pyotr Voykov, in 1927.

The murderer of Andrei Karlov, Altintas, shouted that he did this to avenge Syria and Aleppo. His slogans, before he was shot dead, revealed that he was associated with the terrorist forces that happened to have lost their dearly held territories amidst heavy military campaigns by the Syrian government.

The murder took place less than a week after the Syrian Arab Army personnel finally liberated the besieged city of Aleppo, after a four-year long war. The Russian air support to the Syrian Army is a crucial support factor in the Syrian civil-war and Moscow’s relentless support on diplomatic and military spheres has helped Damascus to hit back at the terrorists funded by the Western powers.

Over the past five years, the Western powers led by the US kept funding the Syrian terrorists to overthrow the legitimate government and to establish a Wahhabi theocratic state in place of the secular republic in the Arab country. The Saudi monarchy, the monarchy of Jordan, the Israeli secret service, and the Turkish government joined hands to bring forth an “era of democracy and freedom” to Syrian people.

When Russia joined its long-time ally in the battlefield to defeat the common enemy, the international terror brigade of the ISIS funded by the CIA, Rothschild, Mossad, and Saudi Arabian monarchy, the NATO partner and satellite state of the US – Turkey started vehemently opposing the efforts of Moscow.

In 2015, the very year the Russians joined the war front and roped in Iran and Lebanese Hezbollah to combat the terror forces, Turkish forces shot down a Russian fighter plane that was flying within the Syrian air space.

The shooting down of the plane irked Moscow and Kremlin unleashed a series of trade restrictions against Turkey, which visibly frightened Erdogan’s regime. In his attempt to appease the Russians, Erdogan did repent half-heartedly for the crime committed against Russia, however, the Turkish government, which was actually using the services of the ISIS to combat the Kurdish rebels, never disowned the terror forces funded by its master Western states and corporations.

Andrei Karlov played a crucial role in explaining the role of the Russian military in Syria to the Turkish government and also in strongly conveying the messages of Kremlin to Ankara, especially after the adventurist attempt by the Erdogan government to flare up confrontation between Turkey and Russia by shooting down latter’s fighter jet in 2015.

When Mevlut Mert Altintas shot Andrei Karlov, he chanted religious Islamic slogans to assert his affiliation with the Wahhabi Saudi government. The killer, who could have been nabbed alive, was killed in a gun-fight, which Russian security experts are claiming to be a pre-planned plot to prevent any investigation into the crime or any interrogation of the perpetrator of the heinous crime.

The attempt to clean the track of a crime can be ascribed to the fact that the state machinery of Turkey was aware of the conspiracy to kill the Russian Ambassador Andrei Karlov, which means it was a party to a serious violation of the international diplomatic norms. The government of Erdogan certainly afforded such adventurism under the patronage of some or other big power. Which eventually points the suspicion needle towards the US and its allies.
Despite officially condemning the murder of the Russian diplomat in Turkey, the Western powers and their US chieftain couldn’t conceal their happiness from the public for long. After shedding few drops of crocodile’s tear for the murdered diplomat the EU and the US went back to the usual vilification campaign against Syrian government and Russia.

While the US administration and large corporations have accused Russia of everything that went wrong globally in the recent days, including the victory of the corporate tycoon and Islamophobic neo-fascist Donald Trump in the recently held presidential polls, the bitterness increased since the tide in the Syrian war changed in favour of Syrian government.

Soon after the murder of Andrei Karlov, we could see the American media comparing Karlov with a slain Nazi ambassador to Paris and present-day Russia with Nazi Germany. The author of this article accused the Russians of bombing and killing innocent people and through juxtaposing irrelevant logics, he justified the murder of Andrei Karlov, whom he called Putin’s soldier.

Through this kind of cheerleading for murderous hyenas who are willing to rip apart the Syrian territory and turn it into another hotbed of sectarian violence replicating the Iraq model, the Western media is working day in and out to justify gross injustice.
The entire fleet of Western mainstream corporate media is busy on blaming the lone-wolf cop for killing Andrei Karlov and portrayed the incident as that of a simple murder rather than a planned international conspiracy. They have tried every possible way to hide the larger plot behind this heinous murder, which happens to be in sync with the policy of the NATO allies who are now trying to intimidate and isolate Russia for its role in Syria.

We have seen earlier that how the US and the West are supporting the ISIS in Palmyra and other parts of Syria to dislodge the government, we have also seen earlier how the Western media started spewing lies about a purported “genocide” in Aleppo to build up mass opinion in favour of the terrorists who were holed up in some parts of the besieged city of Aleppo when the Syrian Army was liberating it.

The murder of the Russian diplomat Andrei Karlov is an outcome of the sum total of the frustration of the terrorist brigades whom the Western Media calls “moderate rebels”. These bed partners of Al-Nusra (an Al Qaeda outfit) and the notorious ISIS are today the harbinger of “democracy” and “freedom” for the West, while the Syrian government, which is trying to destroy the pillars of terrorism and religious fundamentalism in the region funded by the US through the Wahhabi Saudi Arabia and Zionist Israel, is now labelled as the autocratic and tyrant regime.

These type of terror attacks and assassination of diplomatic staff actually proves beyond doubt that the terror forces living on Western salary is at the receiving end and it’s hard for them to run the shop due to the rising pressure from the military of Syria. They are going to lose soon, however, before losing and getting eliminated from the territory of Syria, these forces will certainly bite everyone they can, in a hope to reverse the course of their fate, which is heading towards total doom.