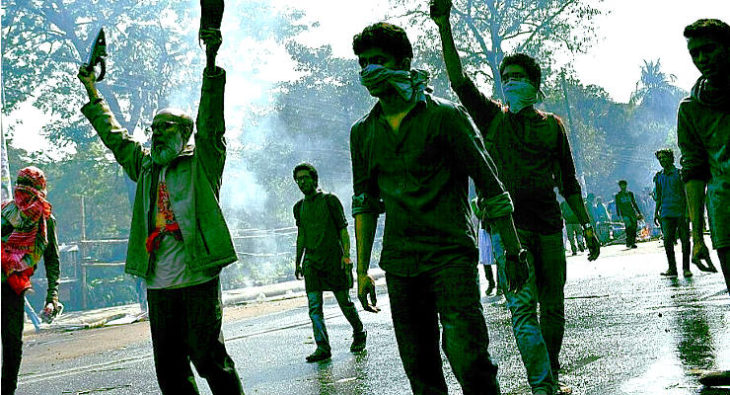 On 26th January Bangladesh was undergoing a turbulence due to a pact that its government signed with New Delhi back in 2010. The people of Bangladesh spontaneously joined a nationwide general strike called by different left-wing organisations against the coal-fired Rampal power station, which is an Indo-Bangla joint venture coming up near the Sundarbans, the largest mangrove forest in the world and threatening its very existence.

The Rampal power station project violates the Environmental impact assessment guidelines; it’s going to be established in an area of 1834 acres just 14 km north of the Sundarbans, which is already under threat due to severe encroachment and human settlements.

Due to the growing public dissent against the pro-India project, the Department of Energy earlier issued 50 point guidelines for the same. Apart from these crucial guidelines the Rampal power station project violates a basic guideline, which dictates that such environment-hostile projects should be outside a 25 km radius from the outer periphery of any ecologically sensitive area.

The overwhelming response of the people of Bangladesh, who participated en-masse in the strike and made it a remarkably successful strike without bullying anyone and without getting bullied by the extreme violent state repression laden on them, is an unprecedented instance in a politically volatile Bangladesh, where the government of Sheikh Hasina is secretly in bed with Islamic fundamentalists promoted by Pakistan and Saudi Arabia.

According to eyewitness accounts, the 26th January strike was joined by working people from different walks of life. From rickshaw pullers to garment factory workers, from street hawkers to port workers, from office workers to students and youth, broad rank and file of common Bangladeshi people joined the strike against the planned Rampal power station. The strike manifested the extreme opposition of the people and their big NO to the environmental catastrophe in making.

Since its foundation, Bangladesh has remained either a satellite state of India or Pakistan; the contradiction between these two powers reflected itself in the politics of the country.

The Awami League government, which is extremely pro-New Delhi, gave in to the demands of the Indian public sector corporate giant National Thermal Power Corporation(NTPC), to allocate land for a power project near the Sundarbans, when the latter couldn’t manage to secure permission to set-up a similar plant in India due to lack of environmental clearance.

Though the flagship Bangladesh-India Friendship Power Company, which owns the Rampal power station project, is owned by the NTPC and the Bangladesh Power Development Board (BPDB) in 50-50 ratio, still the company is hugely dependent on New Delhi for finance capital flow and technological support.

The capital investment by both NTPC and the BPDB in the Rampal power station will be around 30 per cent of the total cost, for the rest of the money, NTPC will lobby with the Indian banking sector and source finance capital up to $1.5 billion.

Which means, a large number of foreign capital funded Indian companies will be controlling the destiny of the Rampal power station that is provided 15 years of tax holiday by the Awami League government.

The reason why the Indian government is pushing the project by pressuring the Bangladesh government simply lies in the fact that the Rampal power station will allow the Indian corporate houses and their foreign investors to extract immense profit within the first 15 years of tax exemption. These corporate houses and their foreign investors control the government in New Delhi irrespective of the party in power.

The promise of a huge commission from the Indian government, if the Rampal power plant is set to motion, made the Awami League desperate to set-up this coal-fired and environment hostile project under any circumstances and the government is trying to forcefully impose its will on the people of Bangladesh. The brutal police torture on the common people voicing their dissent against the Rampal power station is a testimony of Awami League’s testimony.

The mangrove forest belt of the Sundarbans is the home to the largest flora and fauna of the region along with reptiles, aquatic organisms, etc. that are under threat of extinction. Rather than paying attention to the task of protecting this natural habitat of wild animals and the rarest plants, the Bangladesh government is only trying to hoodwink the people by building a 275 metres tall chimney in the Rampal power station, which it claims will address the issue of pollution.

Despite different researchers and science papers questioning the merit behind choosing a location so close to the Sundarbans, the government is outright lying to the public and misinforming them about zero or very “negligible” ecological and environmental impacts from the operation of the Rampal power station.

Since the massive “Long March” organised in 2013, the people of Bangladesh are constantly battling against the monstrous Rampal power station project, which, if operational, will seriously threaten the country as the Sundarbans act as natural barriers against the cyclones and other natural calamities. Already due to the global greenhouse generated warming, the Sundarbans is receding by 200 metres every year, a research conducted in 2012 by the Zoological Society of London (ZSL) found out.

The successful strike against the government’s autocratic way of handling public grievance against the Rampal power station is a testimony that the working class and the common people of Bangladesh have comprehended the threats that the project pose and they are resolute in defying all barriers set by the government that is all-out to appease Indian capitalists. It’s high time that the Sheikh Hasina’s Awami League government scrap the anti-people and anti-national Rampal power station project and agree to the people’s demand of saving the Sundarbans for a safer tomorrow. Defying the people is never a good choice.