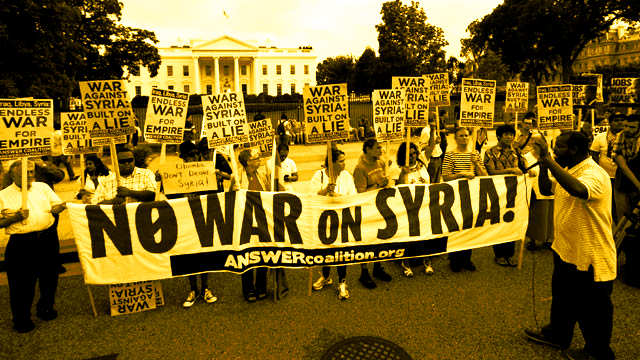 The United Nations once again stooped to the US and legitimised Washington’s illegal campaign to oust the popular government of Bashar al-Assad in Syria, as the UN-constituted probe panel accused the government of Syria for the dead Sarin gas attack on civilians in April this year. Nearly 80 people died in a hospital in Khan Sheikhoun in Idlib province of Syria when an alleged chemical attack took place. The attack was used as a pretext by the anti-Muslim fascist Donald Trump regime to fire 59 Tomahawk cruise missiles targetting Syria.

This UN investigation team, which was funded by the US and the Western powers who have vested interest in the gas and oil reserves of Syria and wants to turn the country into a fiefdom of Syrian Salafists, accused the Syrian government, fighting the US and the West backed ISIS terrorists, of launching 27 more such chemical attacks, out of the total 33 identified incidents, while saying that it has no evidence to accuse anyone of the rest seven cases.

The findings by the UN Commission of Inquiry on Syria accuse the Syrian air force of dropping the odourless nerve agent, Sarin gas bomb, on Khan Sheikhoun, while it was evident from the facts that emerged during the neutral findings that it was the West-backed terrorists who have stockpiled the chemical weapons and an aerial attack on that warehouse by the Syrian Air Force that caused the lethal gas to leak and kill people.

However, the Western imperialist powers headed by the US were determined to establish their fabricated tale to demonise the Bashar al-Assad government, and hence, they kept reiterating their version and the corporate-controlled mainstream media grasped the Western propaganda as gospel truth and milled the same incessantly.

The Western mainstream media, which has openly showcased its support to the big corporate lobby, the Trump regime and the CIA, in their endeavour to forcefully topple the government led by Assad, unapologetically blamed the Syrian government and accused it, based on the fabricated information and data of the CIA.

These media houses, whose coverage on Syria was once called a blatant lie by Donald Trump, determined to build up a false narrative over Assad’s government so that people’s mandate can be won in favour of the terrorists who are fighting against the government.

As soon as the UN’s doctored report on the Sarin gas attack was released, the Western mainstream media started amplifying its attack against Assad and his government, which is now gaining upper hand in its six-year-long war against terrorism funded by the US and the West. Ironically, or shall we say quite predictably, the same mainstream media is absolutely and conspicuously silent on the UN’s dissatisfaction with the US intervention in Syria through uncalled air strikes on civilians. The mainstream press has no problem with the Trump administration killing innocent people in Syria, its only concern is to stop and resist the government of Bashar al-Assad from defeating the terrorists that the CIA and the Western governments have funded for so long.

Assad’s government is blamed on every step of its war against the ISIS and its proxy organisations like the Western-funded terrorists called “moderate rebels” by the US government. If not for the support it has received from Russia, it would have been impossible for the Syrian government to keep the US and other imperialist powers at bay from aggressing its territory. Despite strong objections from the Syrian government and the Russian government, the US and its puppet satellite states like Zionist Israel, Islamist-fascist Turkey, Jordan and Saudi Arabia are grabbing Syrian territory using proxy forces and even official armies at some point of time. Attacks on the Syrian Army by the Turkish forces and the Israeli Army are a regular affair. These serious threats to the Syrian sovereignty are not considered even as a concern to be dealt severely with by the UN and its Security Council, where a majority of the members are in an unholy alliance against Syria.

The town of Khan Sheikhoun remained under the occupation of the al-Qaeda terrorists, infamously known as the al-Nusra Front in Syria, for a long time. The Syrian government has been fighting incessantly to regain the control of the entire war-ravaged Idlib province. The conflict resulted in the death of many terrorists and civilians, the latter mostly killed by the vengeance-seeking terrorists who were keen to punish the people for their support to the Syrian Arab Army and the government.

The arsenal of chemical weapons owned by the terrorist Islamists in Syria, including the dangerous outfits like the ISIS and the al-Nusra Front, are filled by the NATO member and US-puppet state Turkey. In the past, the Reuters reported such chemical weapon deals by the Turkey government forces; the Syrian government is claiming since years that the Salafist fascist Erdogan regime is doing a gun-runners’ job for the terrorists in Syria and providing them with chemical weapons, a strategy endorsed by Turkey’s master, the US establishment.

The UN inquiry into the alleged use of chemical weapon by the Syrian Arab Army limited its hogwash investigation within the fabricated information provided by the CIA and Mossad; it shamelessly ignored the accusations levelled against the Erdogan regime by the opposition Turkish MPs for a long time, which blames Ankara for supplying Sarin gas to the terrorists in Syria. There was no international inquiry or any outcry over the notorious role played by Turkey in helping the terrorists since years to stockpile chemical weapons and then use them against the civilians of Syria. The entire hullabaloo by the Western powers is only focused on levelling false accusations on the government of Syria and to build up a mass narrative using malicious campaigns to propel a “regime change” in Syria like they did in Iraq and Libya earlier.

Since the Sarin gas attack on Khan Sheikhoun in April this year, the Syrian government, the president’s office, and the Russian government condemned the heinous attack repeatedly and have attempted to capture and punish the perpetrators of the ghastly crime. The Russians called the Sarin gas attack a false-flag, which, Putin claimed, had a strong resemblance with the past anti-Iraq vitriol by the US over Saddam Hussein’s so-called possession of chemical weapons and WMD, which was based entirely upon lies -an utmost fake campaign designed by the CIA to oust the popular Iraqi leader who defied the US imperialism for more than a decade. President Assad also pointed fingers at the US complicity and the notorious role of Turkey in arming the terrorists with chemical weapons to wreak havoc on the people and government of Syria.

The Western mainstream media outlets remained silent on the Syrian and Russian standpoints and accusations, and by censoring that news, they kept publishing the false allegations against the Syrian government. Rather than probing all angles behind the gory atrocity committed against the civilians of Khan Sheikhoun to arrive at truth, the corporate media published the apocryphal tales spun by Western lackeys like this to give them credibility and an “authentic” dressing before the public.

There will be far more attacks on the Assad government, both diplomatic and bomber attacks by the US and its allies, especially now, as the UN report on Sarin gas will be used as a major weapon by the US, its Western allies and their puppet media. The mass opinion will be built in the economically ravaged US, in favour of an aggression against Syria, so that the money of the people, the taxes collected by the US government, can be used by the corporate houses to fight a dirty war and earn huge profits for their shareholders.

Only the victory of the Assad government and the Syrian Arab Army in the war against terrorism in Syria and the intensification of a political purging of the Western collaborationists, sabotaging the war on behalf of the US and its allies, will help the Syrian government to thwart the conspiracies hatched by the US and its allies. Until it wins final and a brute victory, with the support of Russia, Iran and Hezbollah, the Syrian government will be accused numerous times in such goof-up cases like the Sarin gas attack on the civilians in Khan Sheikhoun of Idlib province by the enemies of the Syrian people. It becomes, therefore, also imperative for the entire people’s media industry to expose the lies and uncover the truth before the eyes of the people, whom the US and its allies are attempting to make cannon fodder.