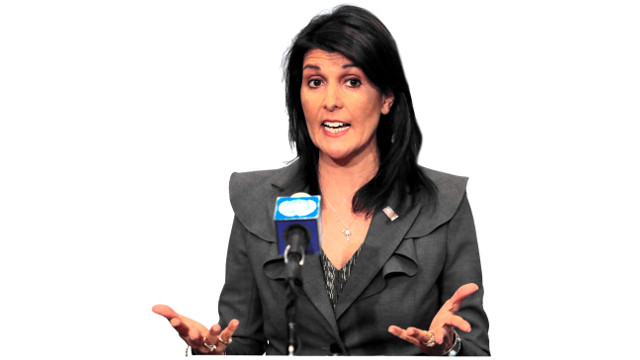 As the Donald Trump regime failed to counter the Russia–Syria–Iran nexus in the United Nations, the US Ambassador to the UN, Nikki Haley had to resign and the Trump regime is now in a doldrum over how to handle a situation where it’s facing an invincible doom in the war theatre of Syria, in which the big oil corporations, military-industrial complex and big banks invested a lot of money expecting greater returns from a Balkanised Syria. Nikki Haley’s resignation exemplifies the immense crisis within the American ruling class and the failure of the US imperialist intervention in countries like Syria, Iran, etc.

Nimrata Randhawa, a Punjabi-American, who used the alias Nikki Haley to sound more white and American so that she is accepted in the reactionary Republican fold, remained a staunch supporter of xenophobic politics of white supremacist and fascist Donald Trump. Nikki Haley has been playing a crucial role in pushing forward the American agenda in Syria, where terrorists funded by the Trump regime have unleashed hell on the people of the war-torn country. Throughout her tenure as the US Ambassador to the UN, Nikki Haley tried to justify the actions of the terrorists funded by a notorious axis formed by the US, the NATO, the UK, the Kingdom of Saudi Arabia, Turkey and the Zionist Israel in Syria. By upholding the brutal massacre of innocent Palestinian men, women and children by the Zionist terrorist regime of Israel, Nikki Haley proved her allegiance to the bloodthirsty American corporations. It’s doubted that she is preparing herself for a bigger fascist assignment, including the chance to run for presidency in 2024.

Nikki Haley’s exit opened a floodgate of speculations over who would put on the shoes of the UN Ambassador and work diligently to implement the strategies and drum the propaganda of the fascist white supremacist Donald Trump regime. Most people are harping on Dina Powell, after Ivanka Trump is considered out of the race. The White House is tight-lipped over this. Even the cause of Nikki Haley’s resignation was not made public for long, which was seen as a sign that she left the crucial position in a haste and the fascist Trump regime couldn’t prepare any official statement with some solid cause to backup the sudden exit. This haste may be either an outcome of the big corporations, the military-industrial complex and the Wall Street’s anger over her poor performance and utmost failure in giving a real sharp edge to Washington’s propaganda regarding Palestine, Syria and Russia, or it can be fuelled by the anticipation of a bigger disaster happening in the American camp’s Middle-East gameplan.

In both cases, it’s evident that the US ruling clique and the fascist Trump regime are quagmire in a deep crisis and they need wars, large-scale wars, to occupy Syria, Iran, North Korea and to neutralise Russia and China through muscle-flexing and regain the American upper-hand in world economy. Though the Americans need such a war to retain their political-economic and military hegemony over Asia-Africa and South America, the immense crisis that the US corporations and the entire monopoly and finance capital is passing through makes a war quite an expensive matter unless the Wall Street gets a good cause to put a bait on it and invest a fortune. Syria gave them a jolt, for which a dimwit like Nikki Haley (she even fell for a prank by a Russian anchor) had to pay a price by halting her absolutely pathetic career.

As long as the US ruling clique, the 1 per cent of the American population that rules and dominates the people of the world, are in deep crisis and their internal contradiction gets acute, the notorious warmonger characters like Nikki Haley and their puppet terrorist forces like the Zionist Israelis, Wahhabi Saudi monarchs, the Turkish fascists, etc. will be in a position of insecurity; like Nikki Haley many more will be kicked out due to their failure while new baits will be brought in to expand the American propaganda through the UN. The battle against lies, deceitful propaganda and slurs against the people of Syria or Palestine isn’t getting over with the exit of Nikki Haley, rather it will become more intense and more fierce in the days to come.