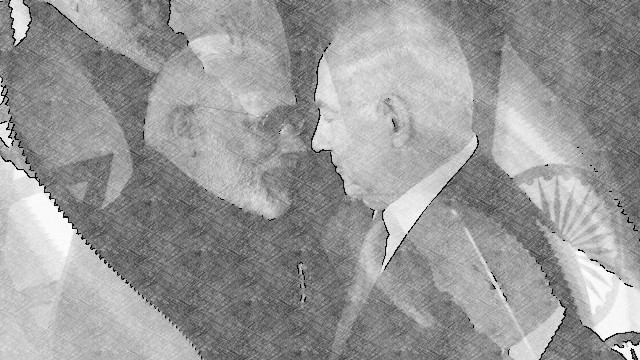 It was 23 May 2019, the counting of the votes was still on and the television screens were flashing the galloping of Narendra Modi-led Bharatiya Janata Party’s (BJP) cavalcade in the 2019 Lok Sabha election when he tweeted his congratulatory message by calling Modi his “friend”.

Later, Benjamin Netanyahu, the Zionist Israeli terrorist kingpin, called up his friend Modi to congratulate him. The clips of the telephone call were shown on Netanyahu’s Twitter. He congratulated Modi on winning a landslide victory while sarcastically grumbling about the fact that he himself had a dire need to stitch an alliance to form a government. Netanyahu’s Zionist fascist Likud Party failed to weave an alliance with other far-right extremist groups after the April election, hence Israel will see another farcical election in September this year.

This pretence of brotherhood and camaraderie isn’t merely a diplomatic graciousness, rather an indication of a deepening bond between the Hindutva fascist BJP and the Zionist fascist terrorists. Modi’s foreign policy focuses upon building robust solidarity between all arch-reactionary US imperialist agents of the world. As two prominent imperialist agents and zealot forces, born in the womb of British imperialism in the 20th century, Hindutva fascism and Zionist fascism complement each other. We have earlier discussed in details during Netanyahu’s India visit how the Modi regime has mortgaged India slowly to Zionist Israel.

India has become dearer to Zionist Israel and the Wahhabi Kingdom of Saudi Arabia, the two major pillars of the US imperialist hegemony in the Middle East, due to its lucrative market, foreign capital-friendly bureaucracy and its usefulness in turning the tide of the Middle Eastern geopolitics in favour of the Zionist-Wahhabi evil nexus. As countries like Iran, Syria, Lebanon, Yemen, etc, with whom India shares a very cordial relationship, have been posing a serious threat to the hegemony of the Zionist Israeli terrorists and Wahhabi Saudi terrorists in the Middle East, therefore both regimes are trying to ensure, following the US diktat, that India is weaned away from these countries, especially Iran, using big baits to which Modi and his sycophants will succumb.

Though the Modi regime and the Indian ruling classes have been unapologetically pro-Zionist and have been glorifying the Zionist terrorism in the Middle East through propaganda, which even targets children to brainwash them into radical Islamophobic Nazis, they, at the same time, need the support of the Muslim-majority Gulf countries as well because a huge amount of foreign remittances come from Indian expats working in those countries. India is also largely dependent on the Arab countries and Iran for its crude oil imports. India has also been a partner in the development of the Chabahar Port, which would connect Iran to Afghanistan and would be a competitor of the China-Pakistan Economic Corridor, in which, ironically, both Iran and Saudi Arabia have their stakes.

After continuous bullying by the US and after gulping the lucrative baits offered by the Saudi Arabian monarchy, India stopped importing oil from Iran, to fulfil the US agenda of economically straining the Islamic Republic to give up its resistance to the US hegemony in the Middle East, especially its support to the Syrian government of Bashar al-Assad and the Houthi rebels of Yemen fighting against a reactionary coalition of Saudi Arabia-led monarchies.

One-tenth of India’s crude oil requirements were fulfilled by Iran, which amounted to 24 million tonnes of crude oil in the financial year 2018-19. Iran used to provide 60 days credit limit, which no other seller countries like Saudi Arabia, Kuwait, Iraq or the US provide. This loss happened as a servile Modi regime, cajoled by Netanyahu and Saudi Arabian crown prince Mohammad bin Salman, agreed to give up its independence in the matter of choosing a right and economically viable crude oil supplier. Now Indian oil requirements are solely dependent on Saudi Arabian whims and the volatile geopolitical scenario in the Middle East.

Even under the Modi regime, India took an independent and brave stand on supporting the Syrian government against the terrorist uprising sponsored by the US and its lackeys like Zionist Israel, Wahhabi Saudi Arabia and other Gulf monarchies to ensure stability in the region. India also stood by the Venezuelan government of Nicolás Maduro after Donald Trump’s lap-dancer Juan Guaidó tried usurping power using a coup d’état. Now, as Modi starts his second innings and officially turns India into a Hindutva fascist state, it will be imperative to have the support of the US imperialism and its allies. It’s unlikely that the Hindutva fascist India will dare to defy the US diktats on the matter of foreign policy, trade and commerce. This compulsion of the Hindutva fascists will make the Indian government adopt the worst foreign policy, which will be unapologetically obsequious towards the US imperialism-led world order and its accomplices.

Under such an obnoxious and servile foreign policy India will eventually distance itself or can even strongly oppose the notion of Palestinian independence to garner the Zionist Israeli support in its endeavour to suppress the Kashmiri people’s resistance struggle. Though India has been trying since decades to win the popular support of the Arab nations on its Kashmir policy and to isolate Pakistan, it’s the inhuman methods adopted by the Indian occupation forces and their brutal repression on the Kashmiri people that caused a wave of general anger among the Arab people against the Indian occupation of Kashmir. Pakistan scored a brownie in weaning away the Arab support for India on Kashmir by citing the gross human rights abuse by its forces. This became a diplomatic ignominy for the Modi regime and its foreign policy.

The servility of the Modi 2.0 regime and its masters, the big comprador capitalists and feudal landlords, towards the US imperialism was recently exhibited when India responded meekly to the US’s move to end the preferential trade status provided to the country. Though this decision by the fascist Trump regime will impede Indian exports and business interests in the US, yet, Modi or his rabble-rouser and self-styled nationalists could neither utter a word against White House on the issue nor take any reciprocatory step against the US trade interests in India. Rather, by continuing to allow the US imperialism unbridled access to India’s economic resources, labour and capital (which the Trump regime ironically accused India of not doing adequately), the Modi regime showed that it has really no concern about the Indian economy’s balance of trade and can continue to appease big powers for some crumbs even if that shatters the economy and livelihood of the people.

Netanyahu and bin Salman are eager to get a larger share of the pie in the coming days. The Zionist Israeli terrorists are wooed by the Modi regime to invest in India’s water and agriculture sector. Even the Modi regime’s flagship project of providing piped water connection to each household — with the water metre and usage charges — has the Zionist Israeli involvement in it. The involvement of Zionist Israel and its technology in Indian agriculture and water management will pose a serious threat to India’s sovereignty and water security. India is going to face an acute water crisis by 2030, and if India’s foreign policy continues to serve the US imperialist interests and the Zionist fascists, then very soon it will lose access to potable water and jeopardise its food security.

For a free, socialist, secular and democratic India, it’s important to support the nemesis of imperialism and all forms of terrorism globally. Netanyahu and Modi, culprits of genocide and bigotry, may have an upper hand in the matters of diplomacy at present, however, in the long run, the Hindutva fascism’s fall due to large-scale people’s struggle will also aggravate the downfall of the Zionist Israeli occupiers and usher Palestine to the dawn of freedom.