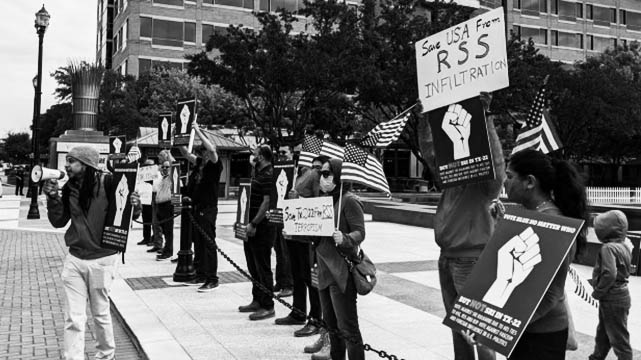 Allegations that Texas congressional candidate Sri Preston Kulkarni’s campaign has been supported by US affiliates of Indian paramilitary Rashtriya Swayamsevak Sangh (RSS) prompted a protest on October 24th in the district where he’s running.

Kulkarni recently denied any previous knowledge of the RSS, stating, “ I didn’t know about all this, like all this RSS stuff, to be honest.” Leaders in US affiliates of the RSS like Hindu Swayamasevak Sangh USA (HSS-USA), however, have asserted that they provided him with funding to “get his campaign off the ground in the first month” during his first race in 2018. At his nomination victory party in May 2018, Kulkarni praised HSS-USA Vice-President Ramesh Bhutada as “like a father to me on this campaign” and said his “campaign literally could not have happened” without Bhutdada’s help.

Chanting “no more RSS,” approximately 20 protestors rallied outside the Sugar Land, TX town hall for two hours on Saturday. “He’s lying about his connection to RSS,” one protestor told media. “Do you want a fascist organisation to be controlling a congressman?”

Kulkarni is the nephew of the late Pramod Mahajan, a senior leader in the RSS as well as its political wing, the Bharatiya Janata Party (BJP), which is currently India’s ruling party. Although Kulkarni has repeatedly denied that he has any affiliation with the RSS, detailed reports have documented heavy financing to his campaign by top leaders in groups like HSS-USA, the American wing of the paramilitary. Several protestors hoisted placards reading: “Vote against Sri Kulkarni due to his ties to HSS, RSS, and BJP.”

“When the RSS props up candidates, they seek to get our approval by painting them blue,” said Afrikan activist Jada Bernard. “Tulsi Gabbard, she had some of the biggest leaders in the RSS and the BJP at her wedding. She has been the keynote speaker at multiple BJP events, including one that was to celebrate the election of Narendra Modi. So when these groups prop up different candidates over and over again with the same money and the same influence, like with Raja Krishnamoorthi and now with Sri Preston Kulkarni, the easiest thing to do to get them under the radar is to paint them blue.”

As chants of “No Nazis, No KKK, No Fascist USA” echoed in the town square, Muslim activist Zeshaan Hussein offered a condemnation of the Modi regime’s recent shutdown of Amnesty International’s India office.

“The Bay Area Chapter of Houston Amnesty International is outraged and saddened by the Indian government’s freezing of Amnesty International India’s bank accounts,” he said. “This act was preceded by several years of harassment documented by Amnesty International staff, which resulted in the organisation being forced to shutter its offices in the country, bringing their work in the country to a halt. That work included human rights defences and speaking out against injustices. For the government of a democratic nation like India, to treat a human rights nonprofit organisation in this manner is outrageous, especially given the great need there is for human rights protection in the region of Jammu and Kashmir and in the rest of India to minorities.”

“It was great to be a part of the protest against RSS infiltration into US politics,” said protestor Jessy Skaria. “Sri Kulkarni, almost fully funded and propped by the Hindutva forces in the USA, should not win from our TX-22, and that would give a body blow to the fascists. But, whether he wins or loses, we are happy to be spreading awareness among the international society about the dangers of this most inhumane and violent organisation, RSS… Their mask is well and truly torn off, the bloodstains are showing very clearly, and they know it, and resent it. Well worth the effort.”