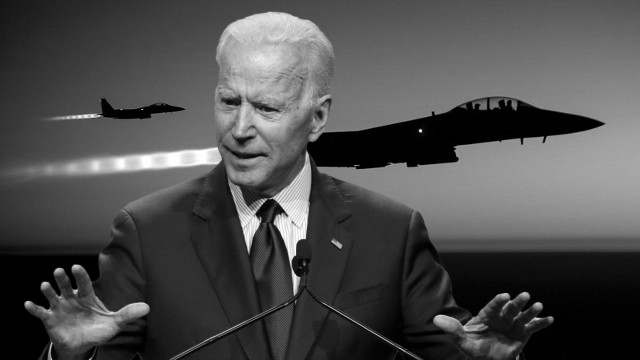 The real opening of Joe Biden’s presidency took place on Thursday, February 25th, when he ordered his regime’s maiden foreign military aggression with the US military airstrikes in Syria. Boasting of the crime committed by it, which killed 22 people, the US military claimed that it targeted the bases of two Iranian-backed Shia militias–Kataib Hezbollah and Kataib Sayyid al-Shuhada. These two are accused by Biden’s regime of launching a rocket attack targeting the occupation forces in neighbouring Iraq’s Erbil on Monday, February 15th. The US imperialism has been indirectly accusing Iran of leading the attack on the occupation forces.

The US imperialist forces “launched airstrikes against infrastructure utilized by Iranian-backed militant groups in Eastern Syria. These strikes were authorized in response to recent attacks against U.S. and coalition personnel in Iraq, and to on-going threats to those personnel, (sic)” the Pentagon quoted John F Kirby, its press secretary.

Kirby, accompanied by the Secretary of Defense Lloyd J Austin, didn’t provide details of how the US ascertained that the targets belonged to the very “Iranian-backed militant groups” that the Pentagon accuses of the recent Baghdad rocket attack targeting the US occupation forces. Both Kirby and Austin relied on rhetoric than on providing details. “There’s not much more that I’ll be able to add at this point other than the fact that we’re confident in the target we went after, we know what we hit,” Lloyd said. “We’re confident that the target was being used by the same Shia militia that conducted the strikes,” he added.

Iran has refuted the allegations of its role behind the Erbil attack and called the attempt to link Tehran– “suspicious”. Foreign Ministry spokesperson Saeed Khatibzadeh told the press on Tuesday, February 16th, “Iran not only strongly rejects these rumours, but also flatly condemns suspicious attempts to attribute the attack to Iran.” He also said, “Iran regards Iraq’s stability and security as a key issue for the region and neighbouring countries, and dismisses any move that would disrupt tranquility and order in this country (sic)”.

The US military airstrikes in Syria hit the Deir Ezzor near the Syrian-Iraqi border. The Syrian Government, led by President Bashar al-Assad, strongly condemned this blatant violation of Syrian sovereignty by US imperialism and called it cowardly aggression. The Syrian Arab News Agency (SANA) quoted the Foreign and Expatriates Ministry’s statement on the US military airstrikes in Syria: “In a flagrant violation of the rules of international law and Charter of the United Nations, the US warplanes on Thursday, February 25, 2021, launched a coward aggression by bombing some areas in Deir Ezzor province near the Syrian-Iraqi borders. (sic)”

Assad’s government accused the Biden-led imperialist regime of synchronising the attack with the recent Damascus visit by the United Nation’s (UN) Special Envoy for Syria Geir Pedersen. The Ministry accused the US of blatantly disregarding the role of the international community to resolve the decade-long civil war in Syria, in which the US-backed Salafist terrorists, with funding from the Saudi Arabia-led Gulf monarchies and Zionist Israel, have played a pivotal role.

SANA said: “Foreign Ministry stated that this blatant aggression is a new chain in the series of repeated attacks by the Israeli occupation forces, the so-called “international coalition,” the Turkish occupation, and the crimes of armed terrorist organizations against the sovereignty of the Syrian Arab Republic under illusive pretexts.

The Syrian Arab Republic condemns in the strongest terms the US aggression against its sovereignty, which contradicts with the terms of international law and the United Nations Charter and with its role as a permanent member of the Security Council (sic).”

Russia, Assad’s closest ally, condemned the imperialistic US military airstrikes in Syria. Russian Foreign Minister Sergey Lavrov accused the US of blocking the reconstruction of war-torn Syria. Lavrov, while speaking to the press on the Afghan peace talks, said, “…the United States’ presence in Syria is illegal and breaks every norm of international law, including the UN Security Council resolutions on the Syrian settlement.”

Lavrov accused: “Recently, we have been receiving information from various sources (we cannot confirm them yet, and we want to ask the Americans directly) that they are allegedly in the process of making a decision never to leave Syria and even to break up that country.”

Iran, as a staunch ally of Syria, condemned the US military airstrikes in Syria. Khatibzadeh said that the attacks are “a clear violation of human rights and international law.” Iran has also reaffirmed its support for Syria’s fight against the US-backed terrorism in its territory. Mohammad Javad Zarif, the Iranian foreign minister, has assured his Syrian counterpart, Faisal Mekdad, that Iran “will continue to support Syria in various fields, notably in combatting terrorism.”

The US imperialist administration under former president and rabid warmonger Barack Obama started the Syrian civil war by forming a dangerous terrorist force named Islamic State of Iraq and Syria (ISIS), which massacred thousands of innocent Syrians and Syrian Arab Army soldiers to topple Assad’s legitimate government and to establish a puppet regime of the US and its Wahhabi and Zionist lackeys. Through years of incessant fighting amid unfavourable circumstances, the Syrian Arab Army under Assad managed to defeat the terrorists and thwarted a major plan to balkanise the country. Even though the entire country isn’t still under Damascus’s control, the US and its puppet terrorists are no more dominant forces in Syria.

Biden, who was the vice president of Obama, played a crucial role in the predatory wars. Infamous as a warmonger, Biden was portrayed as a “progressive” by the hypocritic American “left”. His first war mission forced thousands to dig justification to cover up their faux pass. Though his predecessor Donald Trump carried forward the wars of Obama, the acts of aggression didn’t spike. Biden’s rise to power is intertwined with the US ruling class’s intention to trigger newer wars and intensify existing military operations to boost the military-industrial complex’s profitability. Biden won’t disappoint them.

The US military airstrikes in Syria and its revival of the predatory imperialist aggression, in association with the Zionists and the Wahhabis, to seize control over Syria’s resources, ring an eerie alarm for both Assad and his allies like China, Iran, Russia and others. Damascus must increase vigil to effectively defend Syria from the US imperialism and its lackeys as well as intensify its defence to thwart any untoward incident. The US imperialism is, no doubt, the biggest threat to world peace and stability, which Syria has realised better than most countries so far.