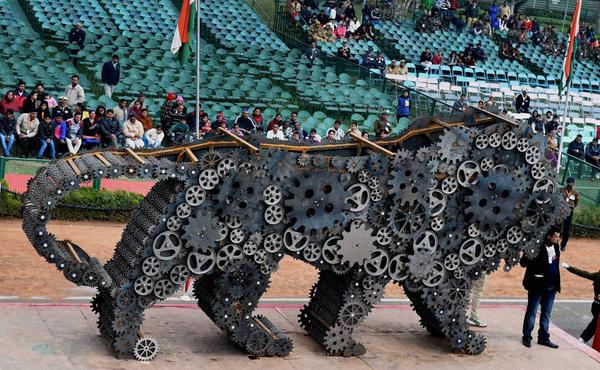 The recent hype created by the Modi government regarding the boosting of the manufacturing sector of India through “Make in India” is nothing more than an effort to sell Indian labour and resources at the cheapest price to the foreign monopoly capital. Modi and his support base, the Indian corporate arms of the foreign monopoly capital, are determined to revive the manufacturing industry, not in the line of that of Western developed countries, but by following the path of China and other South East Asian nations that became the hub of world’s manufacturing industry due to the availability of cheap labour for the investors.

The RSS – BJP government of India led by Modi is following the footsteps of the Asian destinations of foreign capital and simulate their experience in Indian soil by building up more and more Special Economic Zones by acquiring land from the peasantry and handing them over to the foreign monopoly capital at the cheapest price. Also, their endeavour is to ensure that the labour laws are relaxed to the extreme so that the foreign capital does not have to face any sort of bottleneck regarding labour law violations, for which they are famous worldwide.

The model of the IT and the ITES industry of India, one of the chief contributor to the service industry, which contributes a significant amount to the national gross domestic product(GDP), will be the road map for the Modi government to implement the policies related to manufacturing. With the absence of any protection to labour, guarantee for minimum wages, and healthcare benefits, the country will experience the plight of the working class which will be forced to destitution and pauperisation by the policies of the Modi government.

Apart from the cheap labour, the government will also provide the corporate houses with the required amount of land they need, out of which a big portion will be used by the foreign monopoly capital to raise real estate projects, which are quite lucrative source of profit generation in urban India. This will result into forceful acquisition of the fertile lands with the government acting as a broker for the corporates, thanks to the land acquisition act drafted by the erstwhile Congress led UPA government and now made more draconian by Modi regime.

The land acquisition act will provide the sharpest teeth to the land hungry corporate sharks to acquire the lands, and the peasants opposition will be overruled by a biased state, which can even label any corporate project as of national importance.

The Modi government also does not stops at the land acquisition act itself, it is determined to drive away the tribal masses by evicting them from the forest areas rich with mineral resources, and the butcher of Ahmedabad is very well following the footsteps of the previous UPA government led by World Bank agent Manmohan Singh. To carry forward the eviction of the tribals from forest land and to overcome the resistance of the people, the government has implemented most draconian laws and is now ensuring that the drive for deforestation and handing over of the national resources, nurtured and protected by the tribal people for centuries, to the foreign monopoly capital controlled corporate houses at the cheapest price is hastened.

The “Make in India” slogan truly shows its real self, it is a policy, which is not for the benefit of Indians, but for those who will invest minimum capital in this nation and extract maximum profit from it by exploiting labour, grabbing land and evicting the tribal people. The “Make in India” campaign is for the core supporters of Modi regime, the feudal landlords, foreign monopoly capital, and its Indian allies.