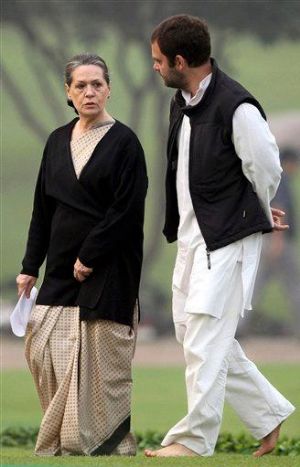 Since 19th April, the mainstream corporate media is busy doing an image makeover of Congress leader Rahul Gandhi. The corporate media houses are painting an image of a firebrand mass leader, who is determined to fight a bitter war with the present BJP regime against the policies enacted by the latter that goes against the interest of the workers and peasants. Though the same media along with the rank and files of the Congress party were making wild guesses when Rahul Gandhi disappeared after the Congress party was swept away in the Delhi elections held in February. The Gandhi scion, heir apparent to the Congress throne after Sonia Gandhi, started his agitation against the policies of the Modi led RSS-BJP government since his return from the undisclosed sabbatical. So far so good, however, the chief concern that is rising in the mind of any politically aware individual of India is – why suddenly Rahul Gandhi? How come the same media that blamed him for his political immaturity started eulogising him as a peasant messiah?

It is evident that the right wing forces of politics always live by the cult of individuals whom their organs portray as messiah of the poor and we have seen this clearly during the perception building campaigns centring ‘brand Modi’ during the general elections held last year, which were centred around a central figure, the Hindutva poster-boy, Narendra Modi. Similarly with almost all regional political parties of India starting from Samajwadi Party to AIADMK we see the trend of leader worship, and in the Indian context, the Congress party should be credited for implementing this feudal culture in the political sphere. The Modi government and its allies are busy in “hard selling” India to the foreign monopoly capital owned corporate bodies, and the policies of the government enacted in the last one year of its rule clearly shows that the Modi led RSS-BJP government is the most right-wing unapologetic regime of corporate worship India ever had. With the Modi magic fading away from its middle class base, and the economic condition of the poor workers and peasants deteriorating every day, the corporate capital and its feudal allies require an alternative leader to befool the people until the next general elections scheduled in 2019. With their second choice Arvind Kejriwal getting unmasked due to his failed stunts in Delhi and the dirty politics of the AAP, the corporate bodies look forward to Rahul Gandhi as an alternative bait to carry forward their baton of “revolution”.

Despite the stories written by the highly paid corporate media journalists depicting Rahul Gandhi’s concern for the poor ( they did similar writings in 2006 as well) we cannot forget that Rahul Gandhi represents the Congress which despite fabricating a centre of left identity is actually another far right, pro foreign monopoly capital, and pro feudal party that has ruled India for over six decades and have caused great sufferings to the people of the country by mortgaging it firstly to the British monopoly capital, then to the Soviet Russian bureaucratic capital, and later to American monopoly capital. The peasants and workers during the regime of Congress rulers, both from within and without the Gandhi family, never had any “good days” in real. The BJP – RSS got promoted due to the nourishment provided by the past Congress regimes to the communal politics and now the saffron outfits are qualitatively fit and quantitatively superior to the Congress Party all over the country barring few states.

The role of the corporate controlled mainstream media is to tie the people of the country within the choices they make on behalf of the masses. The media will try hard to build up a new political entity from the cult of Rahul Gandhi to balance the deficit caused by the sudden flattening of Modi’s gimmick balloon. Hence, they are left with no other current option than Mr Gandhi, whom they have criticised since last few years.

The fact that remains hidden from the people of the nation by the corporate media is that the policies enacted by BJP – RSS are those that were conceptualised by the Manmohan Singh – Sonia Gandhi led Congress government. The policy similarity between these two right wing giants does not leaves much scope of any alternative in the Indian political arena as all the small and medium sized regional parties either align with the Congress or the BJP as per their vote bank convenience.

The time is high for the educated and progressive people of the nation to give a thought regarding a nationwide popular political front of the people, and the same cannot happen anyway from the right wing side. Unless such a progressive political force develops itself to counter the pro monopoly capital policies of both BJP and Congress no headway can be made to better the conditions of the broad masses.