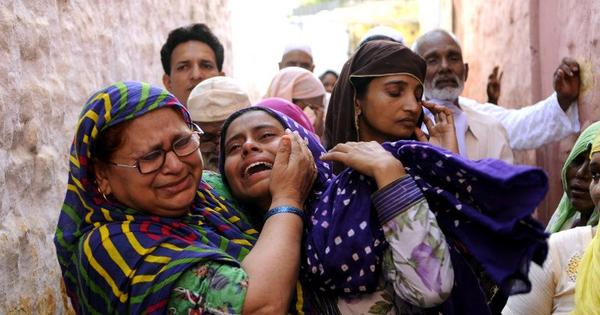 A mob incited by the local temple head and saffron extremists at Bisada village, Dadri district of Uttar Pradesh, which is 28 miles from the national capital New Delhi, lynched a 50 year old Muslim man named Akhlaq and injured his son Danish accusing them of slaughtering a cow and consuming its meat.
The horrific murder that took place on 28th September 2015 shook the conscience of the nation, especially the progressive and democratic forces, as the menace of communal fascism unleashed its terror on the poor of North India following similar activities in Southern and Western India in the recent past. In the last one year, since the BJP led by Narendra Modi usurped the power of New Delhi with a 31% verdict, incidents of communal assaults, especially the repression of religious minorities, has multiplied manifold.
According to the narratives of Sajida, the daughter of slain Muhammad Akhlaq, the temple priests and their coterie consisting of the saffron organisation members started announcing through the loud speakers of the temple to the villagers that a cow had been slaughtered and Akhlaq and his family is guilty of killing the cow and consuming its meat. Following the announcement more than 200 people armed with sticks, knives and stone attacked the house of Akhlaq, dragged him and his son Danish outside while molesting the women of the household. Despite repeated pleading by Akhlaq and Danish the mob kept on hitting them with sticks and stones until Akhlaq died and Danish was in critical condition.
After killing Akhlaq and critically injuring Danish the mob led by few Saffron extremists started proceeding towards the residence of a Muslim joint family living in Bisada village near the mosque, however, a group of young Hindu men had already helped the Muslim people to flee and protected their vacant houses from the invading mob by braving the fascist forces.
The mob later also blocked a road and attacked the police when the latter wanted to lift the blockade by force, the police firing killed one saffron mobster called Rahul Yadav, whose murder was a deliberate attempt by the Samajwadi Party government of UP to incite more people in communally polarised Western Uttar Pradesh to get involved in communal trouble making.
The ruling Samajwadi Party, which is now secretly flirting with the BJP amidst the chaos surrounding the Bihar elections, has though pressed in police and paramilitary to handle the turmoil, however, has also ordered a probe on the ‘nature’ of meat stored at Akhlaq’s house, thereby endorsing the killing by showing the sympathy of the state towards cow, rather than human life. Even if it is assumed that the family has consumed the meat of a cow, then in the context of the twenty first century is it justified to kill a human being for eating an animal he preferred to eat? The question raised by the progressive quarter of the society was quietly off loaded by the Samajwadi Party government.
The murder, first of its kind for beef consumption in the recent days, comes at a time when the Sangh forces are trying to use beef as a blanket to cover its misrule, corporate appeasement and transition of the state to a Hindu fascist system. Beef has turned out to be a chief target for the Sangh family protagonists who are advocating promotion and protection of cow interest more than human lives.
The grief stuck family of Akhlaq asked the media, which flooded their place after the incident, that whether Akhlaq can be brought back alive if the probe shows that the meat was not of any cow. The question raised by the family is haunting the national conscience, as under any pretext killing of human beings for their food habits cannot be justified in twenty first century.
To shed off the responsibility the RSS top brass ordered the BJP to handle the situation. The BJP first called it an accident, when its local MP and Union Minister Mahesh Sharma visited Bisada to meet the family of the dead and later the Home Ministry started intimidating the newspapers and journalists, as Rajnath Singh ordered his lackey media to stop adding communal colour to the incident. However, when the progressive media raised the question about why RSS adds communal colour to even events of drunken brawls, the BJP leaders kept looking for an opportunity to escape.
When the nation did not stopped questioning the RSS role in the murder of a poor man, the BJP roped in their tested MLA and hardcore fascist Sangeet Som, notorious for inciting communal troubles in Muzaffarnagar during 2013 Muslim genocide. Som directly started his usual communal ranting at Bisada trying to tempt the local youth to plunge in a communal genocidal mission. Though Som has left the area afterwards, however, there remains a strong doubt that he will try to remotely incite violence in the village and adjoining region once Danish returns from hospital. The RSS activist Som is hyping the death of the mobster Rahul Yadav, who was killed during police firing, and making his death an issue to trigger another communal riot like situation in the region.
The cow, which is worshipped by millions of Hindu’s in some parts of India, is consumed by people of other faiths since ages, and except for India there had been no ruckus in the whole world regarding beef consumption.
Hindu fascism, promoted by the Nagpur headquarters of RSS, the parent organisation of the ruling BJP, exploits the unaware Indians of the Hindu faith, who are backward in terms of consciousness due to the existing semi-feudal production relations that govern their lives and livelihood, to farther their own political goal of creating larger polarisation of the people of the country on religious lines, establish theological and puritan rule of Hindu religion by establishing a Brahmin hegemony and by intensifying exploitation and oppression on the lower and oppressed castes of Hindu societal hierarchy and religious minorities.