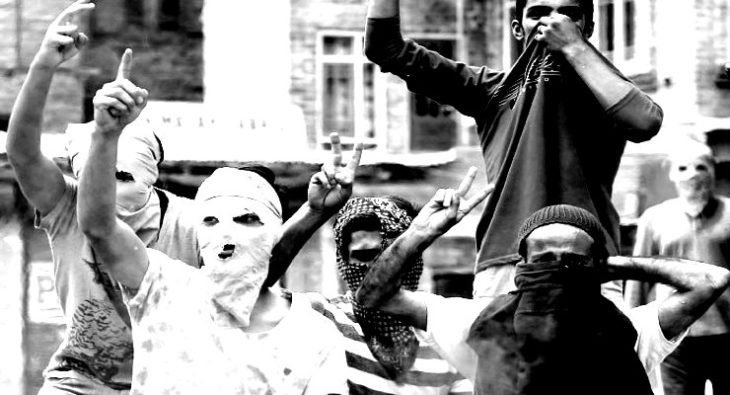 When the Friday afternoon prayers at the local mosques were over on 13th January in Srinagar, the Kashmiri youth poured down on the streets, in the Batamaloo area, raising their fists in protest against the brutal attack on the Muslims in Kathua of Jammu by a group of Hindutva militants allegedly linked with the ruling BJP’s paternal organisation RSS, who attacked the Muslims in Harya Chak village of Kathua district using the excuse of cow slaughter.

The CRPF and the local police, scared by the sight, resorted to baton charge and then started firing tear gas canisters at the crowd, which injured many protestors while they too retaliated with stones against the heavily armed para-military.

Protesters also clashed with the paramilitary and police in Sopore’s Jamia Masjid area following the Friday prayers and there too, the paramilitary forces used extensive violence to disperse the protestors and severely wounded the youth who dared to cry out the banned ‘Azadi’ slogan.

The protest rallies against the attack on the Muslims in Kathua of Jammu also took place in other parts of the valley including Budgam, Khatran Beerwah, Mirpora Beerwah, Bundgam Magam, etc. according to the Hurriyat (M) statement. A lot of Kashmiri people came down on the streets after the afternoon congregation and protested loudly against the BJP’s vile attempt to vitiate the communal atmosphere of Jammu Kashmir.

Despite a heavy presence of Indian mainstream corporate media staff in the entire valley, the corporate media houses completely blacked out the news of the protests by the Kashmiri youth against the attack on the Muslims in Kathua of Jammu by the Hindutva forces, as it contradicted the ruling BJP’s claim that Narendra Modi government’s demonetisation exercise was a severe blow to those who organise stone throwers in Kashmir by “luring them with instant cash”.

Media corporations rather highlighted the RSS’ claim that it will soon launch an orientation programme for the Kashmiri youth to Indianise them and inculcate the spirit of “nationalism” to integrate them with the “national mainstream”.

Many of the so-called independent media houses of India too propagated the declaration of the RSS, while remaining conspicuously silent on the breakout of the mass outrage throughout the valley against the misrule of the PDP-BJP coalition remotely managed by the RSS.

Since the time the PDP formed an alliance with the BJP to form a puppet government in Srinagar, the RSS multiplied its power in Jammu and started penetrating in the Kashmir valley with the total support of the occupation forces led by New Delhi.

The RSS is trying to implement its seven decades old programme of an ethnic cleansing of Muslims in Jammu and a total alteration of Kashmir’s communal equation by bringing in upper-caste Indian Hindu settlers and displaced Kashmiri Pandits [ref]Kashmiri political forces led by the Hurriyat and other pro-independence forces had repeatedly invited the Kashmiri Pandits who were forced out of the valley by the Wahhabi terrorists in 1990s to be back in their old homes and not to fall in the trap laid by the Hindutva forces who are planning to build special settlements for the Kashmiri Pandit community following the Israeli designs of building settlements in occupied Palestinian land. The Indian government repeatedly ignored the call of the Kashmiri politicians of rehabilitating the Kashmiri Pandits back to their own homes and kept the issue unsolved to milk the agony of the large displaced community.[/ref] to specially demarcated places in the valley.

Communal tension has increased manifold in Jammu since the Modi government was formed and got further intensified since the Hindutva forces started asserting their presence under the patronage of the PDP-BJP government. In Jammu, the Muslim people are already turned into second class citizens and are often at the receiving end of the vindictive violence unleashed by the RSS-sponsored Hindutva forces.

The attack on the Muslims in Kathua of Jammu by the Hindutva force is another example of the intensification of communal polarisation and hate spewing exercise by the Hindutva agents in the region, especially by playing the “cow card”, which the Kashmiri political forces vehemently opposed.

“The recent attacks in Kathua and the criminal silence of so-called rulers on these attacks actually clears the fact that RSS led PDP-BJP rulers in Jammu Kashmir are hell bent upon destroying the fabrics of unity in our society and are promoting communalism for their lust of power and authority,” Jammu and Kashmir Liberation Front leader Yasin Malik said in a statement.[ref]The report on Mr Malik’s organisation’s statement can be found in this URL: http://www.kashmirmonitor.in/Details/115999/%E2%80%98rss-backed-rule-in-kashmir-promoting-%E2%80%98communalism-yasin-malik this was last accessed on 15th January 2017[/ref]

“Attacks on Muslims and intimidating them started long back from Gool Gulab Garh and now this condemnable exercise is being practiced in Rajouri, Poonch, Doda, Kishtwar, Baderwah, Rambhan, Kathua, Udhampur and other parts and areas of Jammu region,” said the statement. Malik also accused the government of Jammu Kashmir for its unapologetic appeasement of the RSS led Hindutva forces, who are allowed to organise armed processions in Jammu whilst the opposition forces are not even allowed to carry out peaceful movements in the region.

The youth in Srinagar and elsewhere in Kashmir were waiting since a long time for the snow to melt,[ref]A recent report published by Yashwant Sinha led special team of civil society members, who visited the Kashmir valley to talk to different stake holders and understand the situation, stated that the stone pelting and protests will go through a lull period only during the winters due to the extreme weather conditions. With the onset of the spring, the protesters will return to the streets. [/ref] so that they may hit the streets with extreme vigour of the Kashmiri version of “nationalism” (which definitely goes against the RSS’ version of nationalism) and exhibit their deep hatred against a brutal regime that has colonised them and is attempting every now and then to psychologically weaken the Kashmiri people so that the latter may succumb before the military might of the occupier.

The calculations of New Delhi based autocratic rulers and its Kashmiri puppets are altered by the youth, who are defying death and the planned operation of the Indian occupation forces aimed to maim them. The youth is rather exhibiting a unique trend of utmost disregard for personal safety and are taking up the cause of ‘Azadi’ more seriously than their preceding generations.

Where the Kashmir conflict will turn in 2017, only the forthcoming spring can tell. However, it seems, through events like the attack on the Muslims in Kathua of Jammu, the RSS is sending a signal that it wants the youth of Kashmir on the streets much before the snow starts melting. The desire is an indication that the ruling saffron bloc with Modi at its helm is reluctant to stop the bloodbath in Jammu Kashmir for its nefarious political goals. This will be a death knell for any democratic solution to the Kashmir issue in the near future and only escalate the vicious cycle of violence, state-sponsored violence in Kashmir-the erstwhile paradise on earth.