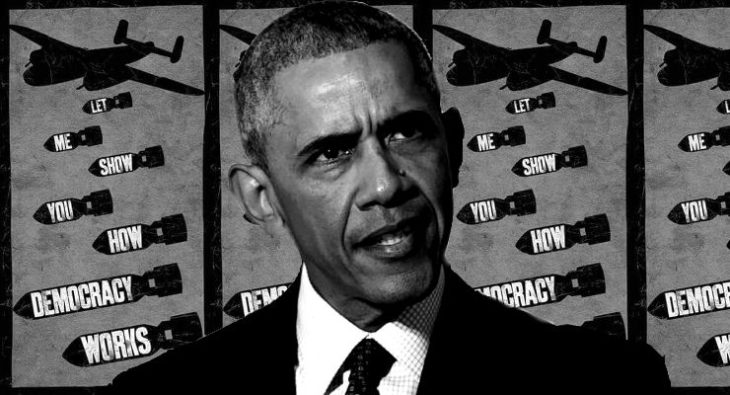 Famous Hollywood female actor Meryl Streep cried out and condemned the US president-elect Donald Trump for the latter’s mimicking of a disabled journalist during his rhetoric-filled election campaigns. She expressed her dismay at the growth of intolerance in the US following the ascension of Donald Trump. Outgoing US President Barack Obama seconded her.

Obama, during his farewell speech in his home state Illinois, also shed few drops of tears while counting his accomplishments vis-a-vis his promises during the tumultuous 2008 campaign. He too expressed his disapproval of Trump’s fascist ways and his rhetoric against people, especially the Muslims and other immigrants.

While both were right, politically, to some extent, in condemning a fascist hate monger and an ardent opponent of civil liberties and equal rights, they both just concealed a major fact that would have shown the world what Nobel Laureate Obama’s anti-war and liberal administration was really like.

Forget the tally of the last eight years, the US government dropped 26,171 bombs on seven countries of the world in 2016 alone! It killed nearly 300,000 people through direct and indirect actions and if we calculate the bombs with the days and hours then we will have nearly three bombs every hour for the entire 2016! Do you need a terrorist anymore?

Such is the example of an ideal liberal and pro-peace Obama regime that never deviated from the policies pursued by blood-thirsty American hawks since the era of Harry S Truman.

The US, under Obama, got involved, along with its NATO partners to first topple Muammar Gadaffi in Libya, then it did send supplies and dollars to the terrorists in Iraq and Syria to destabilise the region and sparked one of the largest terrorist uprisings in the Syrian territory with the sole aim of toppling President Bashar al-Assad’s legitimate government and establish a tyrannical theocratic fascist state machinery in the lines of Saudi Arabia and other such Gulf monarchies.

The US government, under Obama, did nothing to end the menace of the Taliban in Afghanistan and Pakistan, the very organisation it helped to build in the 1980s to further its imperialistic designs in the geopolitically important Afghan heartland.

Rather, it was during the reign of Obama that the US administration and its intelligence unit came up with the concept of “good Taliban, bad Taliban” that helped the most notorious fascist organisation of Afghanistan to gain upper hand in the political course of the country and also in neighbouring Pakistan.

Through a highly marketed “covert military action” Obama claimed his regime’s forces gunned down the mastermind of the September 11 terror attack, Osama Bin Laden, in the latter’s hideout based in Pakistan. Laden was a lackey of the US monopoly capital and its Saudi Wahhabi puppets, who was specially sent to de-communist Muslim majority countries like Afghanistan, Pakistan, etc, through his bigotry-driven violent politics.

Unlike the corpses of Saddam Hussein and Gadaffi, who were known foes of the US regime, the corpse of the Saudi billionaire-turned-terror corporation chairman Laden, was never displayed as a trophy by the US, which always use such occasions to market its military might and bully opponents.

Rather, the US claimed that it threw the body in the Arab Sea! What a unique excuse to save itself from future trials and possible tomb hunters! They didn’t tell us whether Laden just shaved and moved on to a new assignment in Syria or the CIA parcelled him to some secluded South American haven of drug lords and womanisers.

Due to the immense funding provided by Obama’s administration, the Ukrainian fascists grew manifold stronger and started attacking those very political forces in the country that represented progressive views and opposed the colonisation of the former Soviet Republic by the European Union, the very union of the large banking corporations and Wall Street-funded European oligarchs.

In the Balkan region, the US government allowed the brewing of tension by siding with the Western stooges ruling the countries of the region by building a missile defence system against Russia in the region.

Throughout South-Eastern Asia, the US government under Obama started resurrecting the anti-China coalition that was created in the 1960s and, following the victory of Trump, a habitual China basher, the preparations are on to militarily encircle China using the decades-old American puppets in the region like Philippines, South Korea, Japan, Australia, etc.

Even the Indian government started dancing to Washington’s anti-China tunes after three decades of a lull in such activities, thanks to the pat in the back by the US government.

All these kept on happening at a time when more black people were killed by white policemen back home in the US, who went unpunished due to the immunity they enjoyed under the law and despite having a black president at the helm, the US observed the first of its type of #BlackLivesMatter campaign, a resurrection of the heroic black resistance movement against racist ruling classes and their apartheid in 1960s America.

Does Obama even need any credit for his unabated support to the Zionist Israeli regime in its aggression against the Palestinian people despite universal condemnation? The US support emboldened Zionist terrorist Israel and made it defy the criticism of the international community and the lame-duck United Nations. Though Obama tried to erect a sham pro-people image by strategically “abstaining” from voting in the United Nations Security Council that called Israel to stop building settlements on occupied Palestinian land in the West Bank. The move was a hoax as Trump has promised to overturn it.

Over years the Obama administration, which used the common people’s money, the taxpayer’s money to bail out big banks and corporations from the mire of economic depression that gripped the headquarters of international capitalism since 2008. His wholehearted support to the blood-sucking parasites of Wall Street gave rise to the Occupy Wall Street movement, which spread like a prairie fire throughout the US challenging the empire and its ruling clique of one per cent people.

Apart from supporting the US corporations to mill profit from the troubled oil zone of Middle East Asia by crimsoning the soil with the blood of innocent civilians, the Obama regime unleashed its wrath and left no stone unturned to nab those whistleblowers like Edward Snowden, who exposed the US secret snooping programmes like Prism, and Julian Assange, the Australian computer programmer and journalist whose venture Wikileaks became a thorn in the eyes of the US rulers. Chelsea Manning, the intelligence staff of the US occupation forces in Iraq, who helped Wikileaks with documents was thrown behind the bars for 35 years by the Obama regime running its vendetta against anyone who stood for truth and justice.

Obama was no different than his predecessors. He led the most violent and most tyrannical regime on earth, which is a serious threat to the stability and global peace. His regime formulated similar reactionary policies and pursued similar agendas that his predecessors, all of whom have been lap dancers of big monopoly and finance capital like him, carried out with great impunity.

It’s certain that Trump will be stinking bad, his regime will unleash severe oppression on the people of the US and those in Asia-Africa and South America and his policies will intensify bloodshed in the name of protection of American interests in Middle East Asia and other parts of the world. However, it’s not a secret anymore that the regime of Obama was no different, except for the corporations that favoured Obama and those favoured Trump, there will be no real difference in the horrible condition that the world is reeling under at present under Trump’s rule.

There can’t be any proper farewell to Obama than to show him that entire Syria is now rejoicing the exit of the man who wreaked havoc on them to appease his own masters, the big corporations. Let him descend the same trash bin of history where Truman to Richard Nixon, Jimmy Carter to George Bush and Bill Clinton are residing. For Streep, maybe a major emotional role in an upcoming movie will do.