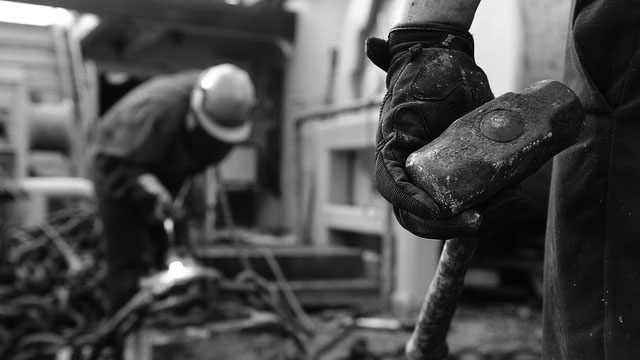 The Hindutva fascist Union government led by Prime Minister Narendra Modi’s Bharatiya Janata Party (BJP) and its ideological parent, Rashtriya Swayamsevak Sangh (RSS), is launching a brutal assault on the working class by effacing the concept of permanent, jobs in all sectors, including the public sector. The Industrial Relations Code, 2019, is going to turn all jobs into contractual jobs, for fixed terms, in all sectors.

The Modi regime is replacing the existing 44 labour laws into four codes, vis wages, industrial relations, social security, and safety, health and working conditions. Under this Industrial Relations Code, 2019, the Industrial Disputes Act, 1947, the Trade Unions Act, 1926, and the Industrial Employment (Standing Orders) Act, 1946 will be combined. This is hitherto the severest blow to the rights won by the working class through its fierce struggles since the colonial period.

Right now, the Labour Code on Wages has already been approved by Parliament in August, while the Labour Code on Occupational Safety, Health and Working Conditions has been referred to the standing committee of labour. This means that the Modi regime has made significant progress in undoing the rights of the working class. If these 44 labour laws are amalgamated, the working class will suffer a lot, while the corporate houses, who are keen to run a hire & fire reign, without showing any concern for the working class, will have a great time.

If the Industrial Relations Code, 2019, is passed by the parliament and is enacted as a law, the scope of permanent employment in both public and private sector will be over as all jobs can be easily turned into term-based jobs. Under the new Code, the employers, both government and the private sector, will be able to hire temporary staffs for all roles directly, without involving a labour contractor. Though the Code says that the temporary workers will get the benefits at par with the permanent workers, it’s evident that at present when even the permanent workers enjoy no better rights, the fate of the temporary workers will be worse.

In the due course of time, the Industrial Relations Code, 2019, will help the corporate houses to significantly reduce their workforce and commitment towards the labour through contractual hirings for most positions. This will eventually weaken the working-class movement as the trade union rights of the workers will be curbed. Though the Code has retained the threshold on the worker count at 100 for prior government approval before retrenchment, from earlier 300, it has given leeway to the corporates through a provision for changing ‘such number of employees‘ through a notification.

Citing a recent study on the data of 1,777 companies, CMIE published a finding showing that while the real wages grew at 5.3% in the financial year (FY) 2018-19, the inflation grew by 5.5% only. India’s unemployment is hovering between 7.5% to 8% and labour participation fell from 48% in 2016 to 43% in 2019 due to prevalent of negative sentiment in the market. Moreover, between FY 2011-12 and FY 2017-18 more than 9m jobs were lost. Layoffs at large-scale have become an inevitable part in real estate, construction, manufacturing and other sectors that employed a large number of workers hitherto.

The high unemployment rate is aggravating fall in demand for goods and services, catalysing the economy’s asphyxiation due to lack of breathing space. The vicious cycle of unemployment, fall in demand resulting in far more unemployment has wrapped the Indian economy like an octopus. At this hour, the government’s sole concern should have been employment generation through public sector spending to ensure more money flows to the bottom of the pyramid to increase demand for goods and services, which would, in turn, help the economy recover from the abysmal crisis for some time. Rather than providing employment opportunities and fortifying the employment of present workers, the Modi regime is axing on currently employed people through a plethora of anti-labour measures.

If this Industrial Relations Code, 2019, is passed in the parliament and is made a law, then it will be a major setback for the working class of the country. Even though the middle-class, who form the bulk of the white-collar employees, support Modi and the BJP due to their Islamophobic standpoint, can’t escape the ordeal as the Industrial Relations Code, 2019, is going to affect their jobs too, both in public and private sectors, leaving them as vulnerable as the working class whom they have mocked so far.

At present, when the Modi regime is planning to sell the government’s stake in crucial public sector undertakings like Bharat Petroleum Corporation Limited, Bharat Sanchar Nigam Limited, Air India, Indian Railways, etc, to help the big crony-comprador capitalist donors of the BJP-RSS and their foreign corporate masters to gain strategic control of the Indian economy and its sovereignty, then this Industrial Relations Code, 2019, is a direct assault threatening the existence of the working class, especially the organised working class, in India. No power within the parliament can stop the Code from getting enacted as Modi and his corporate-lackey coterie have the support of the majority, and even the mainstream opposition is in no mood to irk the corporate world. The only resistance to this assault on the working class can be built outside the parliament, in the arena of mass struggles.

Only a nationwide working-class struggle can beat back and forestall this notorious agenda of the Modi regime to sacrifice the working class and appease the bloodlust of the corporate donors of the BJP-RSS. The struggle of the working class can only win and defeat the Hindutva fascist regime if it’s waged with a determination and an uncompromising zeal to achieve victory. A massive working class’s struggle, supported by the peasants and oppressed people can not only force the Modi regime to retreat on Industrial Relations Code, 2019, but can also hasten the Hindutva fascist regime’s fall.