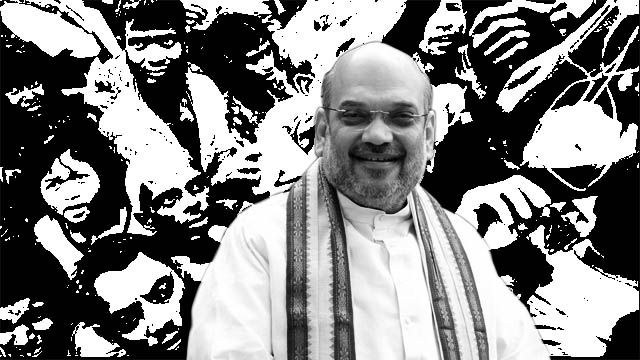 Union Home Minister Amit Shah told the parliament that Prime Minister Narendra Modi-led government will now implement the controversial, anti-Muslim National Register of Citizens (NRC) exercise all over India. This declaration comes with the proposal to scrap the four-year-long Assam NRC. This news sparked a major controversy as it affirms the long-standing accusation levelled against the Modi regime and the Bharatiya Janata Party (BJP) that there is a notorious agenda that aims at implementing the NRC all over India. So far the Modi regime didn’t clarify anything about the new NRC proposal.

Why the Modi regime and the BJP decided to scrap the NRC in Assam after completing the gargantuan task of verifying details of 33.02m people and excluding 1.9m from the final list published on 31 August 2019? Why is the Modi regime now reversing the Supreme Court-monitored process that it certified as foolproof earlier? Why the government is going to let go of the Rs 15 billion that it had spent on the Assam NRC exercise from the public exchequer?

There are multiple reasons behind Shah mooting the idea of a new NRC.

Disenfranchisement of the Muslims

The NRC is needed on a pan-India basis to disenfranchise Muslims on a large scale to ensure their voting rights are taken away and they are rendered stateless or second-class citizens in India, sans any rights. This indeed is the monstrous agenda of the Modi regime that also conforms to the Rashtriya Swayamsevak Sangh (RSS)-led Hindutva fascist camp’s long-term vision.

India has nearly 200m Muslims, the largest of all religious minority groups, and even one of the largest Muslim populations in the world. If even 25% of the community is stripped by the Modi regime of their constitutional rights, and are rendered stateless, then the scope for any assertive Muslim political voice, questioning Hindutva fascism, can be easily contained.

If the Muslims lose the last vestige of their political space in the so-called secular state, then the RSS’s dream of establishing a  Hindu Rashtra (theocratic dictatorship of Brahminical feudal-comprador classes) will be realised. VD Savarkar, the father of Hindutva fascist doctrine, laid down some conditions for Muslims to live in a Hindu Rashtra, the foremost among them is to give away the right to be equal citizens.

The RSS is ensuring that the BJP and the Modi regime can work in a synchronised and concerted manner on the topic and ensure the implementation of the Hindu Rashtra project to fragment the working class and neutralise the possibility of any future democratic mass struggle. The NRC is a crucial weapon to achieve this goal.

This pan-India NRC drive will also help the big corporate donors of the BJP to profiteer at the cost of the disenfranchised poor people’s agony. At the hour of an utmost crisis of global monopoly-finance capital and its lackey Indian crony-comprador capitalism, the option to have a large pool of cheap or virtually free labour is indeed a boon. The Modi regime is trying to appease its corporate bosses by sacrificing the poor, downtrodden and resourceless Muslims at the altar of capitalist exploitation.

The final NRC list in Assam excluded 1.9m from the 33.02m people who applied. If we take this as the ratio of rejection, then 5.75% of the people were excluded from the list. In the case of 1.3 billion people, 74.75m will be excluded from the NRC all over India, which will be a very large number. If 74.75m people are turned into official slaves, second-class citizens sans rights, then it will become a major blessing for the big corporate houses, as they will be able to exploit the labour of such people.

Even though the Modi regime is building Auschwitz-styled concentration camps to lock the people excluded under the NRC in Assam, it is absolutely impossible to lock 74.75m people throughout India. It’s to serve the larger interests of the corporate houses, the Hindutva fascists will allow a large number of those disenfranchised Muslims to remain aloof and toil for the corporates.

The Assam NRC debacle and the CAB issue

The Assam NRC exercise was done following the template set by the anti-democratic Assam Accord, 1985, signed between the Congress party-led government and the Assamese chauvinists. It excluded those who cannot produce evidence to establish legacy before 24 March 1971, the cut-off date agreed upon to keep at bay the flood of Bengali-speaking refugees who fled former East Pakistan (now Bangladesh) to evade the grotesque massacre named Operation Searchlight unleashed by the Pakistani Army in March 1971.

For the poor people of the Bengali-majority districts of Lower Assam, who suffer annual floods that wash away all their belongings regularly, it became a tedious task to show the documents or records that prove their legacy. This excluded a majority of them, especially the Bengali Hindus, from the final NRC.

Though there have been vociferous demands from democratic and anti-fascist forces to scrap the NRC, the BJP, soon after winning power in Assam, intensified the exercise with vigour to ensure that the Bengali Muslims and a section of the Assamese Muslims are disenfranchised through it. The strategy didn’t work quite well, as 80% of the 1.9m people excluded from the NRC are Bengali-speaking Hindus, who, ironically, form the core vote bank of the BJP. This irked not only the Bengali Hindu supporters of the BJP but also threatened to jeopardise the party’s prospect in West Bengal, where it has been attempting to become the key political player by polarising Hindu voters.

The BJP earlier promised the Bengali Hindus of Assam, the majority of whom migrated after partition and, later, after the formation of Bangladesh in 1971, citizenship through the Citizenship (Amendment) Bill or the CAB. The CAB promises discriminatory citizenship exclusively to the non-Muslim refugees, who have fled from Afghanistan, Bangladesh and Pakistan due to religious persecution. The CAB is dangled as a mirage, a trophy, before the Bengali Hindu refugees living in Assam and West Bengal, however, it sparked a major upheaval in the entire northeast, as the xenophobic and chauvinist forces of Assam and other states considered the mooting of such an idea a threat to the demographic equation of the region.

While the democratic and anti-fascist forces oppose the CAB because it violates Article 14 of the Indian Constitution, the Assamese chauvinists and ethnic-nationalists oppose it out of sheer xenophobia. The massive anger against CAB came out of sheer hatred against the Bengali community, Hindus and Muslims alike. The RSS-led Hindutva fascist camp has been trying to balance the tightrope walk, to appease both sections, however, with a major focus on titillating the Bengali Hindus.

As West Bengal has 42 Lok Sabha seats, far more than the collective seats of all seven states of northeast, therefore, the BJP is keen to build a loyal vote bank by wooing the Bengali Hindus, especially the lower-caste Hindus and ostracised Bengali Dalits called Namasudras. This is a reason that Shah and Modi have been promising the Bengali Hindu refugees a secure corridor to the realm of citizenship. Oppressed communities like the Matuas, spread across various districts of West Bengal and Assam are harped upon by the RSS and the BJP using Islamophobic propaganda to radicalise them.

In such a situation, the exclusion of nearly 1.2m Bengali Hindus from the NRC and the ordeal suffered by those who were either stamped as doubtful voters or as foreigners, panicked the Bengali Hindus of West Bengal, jeopardising the political prospects of the BJP a year and a half before the 2021 assembly elections in Assam and West Bengal.

To ensure that the Bengali Hindus of West Bengal, especially the refugees who have flocked the party with a hope of getting citizenship, aren’t weaned away by the opponents citing the tribulation of Bengali Hindus in Assam, the BJP has been advocating scrapping NRC, taking into confidence the Assamese xenophobic chauvinists by showing them the lower number of exclusions vis-a-vis the initial estimation of nearly 4m, those who were excluded from the first draft. The BJP tried to build a narrative since the final list was released that the NRC list is faulty and each Hindu in it will be rescued through the CAB.

Now, as the circle is full with the scrapping of the NRC, it’s inevitable that the BJP, despite retaining a part of the reactionary features of the original exercise, will make the nationwide NRC a bespoke programme to exclude Muslims explicitly. This is the sole reason that the BJP is trying to prolong the exercise for another few years and reap benefits in the 2021 assembly elections in Assam and West Bengal. The BJP knows very well that if it seizes West Bengal and Kerala, the other two states with a large Muslim population after Assam, then it will be able to surely turn India into a Hindu Rashtra by amending the Constitution with the help of a pro-government Supreme Court.

The way ahead: Scrapping NRC-CAB and nothing less

West Bengal Chief Minister Mamata Banerjee, who was earlier vehemently opposed the NRC exercise in the state, gave up her opposition, in a subtle way. The West Bengal Government is already building large concentration camps in two places to lock down the suspected foreigners. More than 21 people have died in the state fearing the NRC. While seven of them committed suicide, the rest 14 died of heart attack or similar panic attacks. Banerjee’s regime also gave nod to the National Population Registry (NPR), which is a prelude to the NRC. The NPR is now been dressed as population census, which it isn’t as the latter is a different exercise that is all set to start in 2021.

To stop the RSS and the BJP have their way and establish the Hindu Rashtra by disenfranchising the Muslim community in the Muslim-majority states, especially in Assam and West Bengal, the only way left for the democratic and anti-fascist forces is to start a major NRC boycott movement that can mobilise not only the Bengali Muslims but also the other oppressed communities, including the Namasudras and tribal communities by showing the example of what happened in Assam and how the NRC ruined people’s lives. The unity that can be forged between the minority Muslims, Namasudras, the backward castes and the Hindus against the NRC exercise can definitely impact any election or political movement quite well.

The NRC is a declaration of war by the Modi regime and the corporate-feudal nexus-funded Hindutva fascist camp against the Muslims and oppressed communities of India. It’s a state conspiracy to betray the people and snatch away their rights. The CAB and the NRC are two major enemies of the Indian people, the majority of whom are poor and toiling. It needs to be defeated through that very people and unless a united democratic and anti-fascist alliance takes up the task to fight against the menace, there will be no respite but the pain of the people will only prolong.