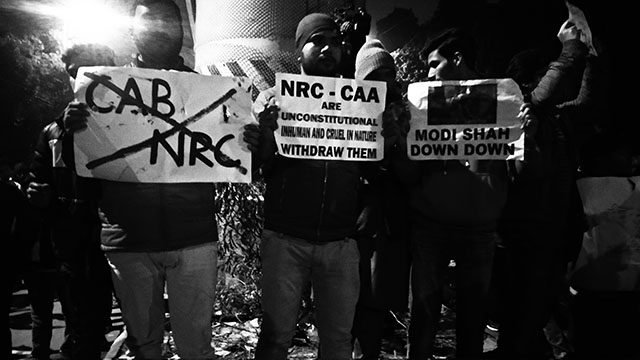 The ruling Bharatiya Janata Party (BJP) has declared that it will not use the Citizenship (Amendment) Act, 2019 (CAA 2019), as a propaganda tool in West Bengal during the forthcoming Durga Puja festival. The BJP’s sudden volte-face over the CAA 2019, which it has been dangling before the Bengali-speaking Hindus, the ostracised Namasudra community (Bengali outcaste Dalits) and a large section of the indigenous tribes, as a key to regain citizenship even if their names are struck off the rolls of the proposed National Register of Indian Citizens (NRIC or NRC) that the CAA 2003 provisioned, shows a tectonic change in the party’s priorities in the state. But the question is what compelled the BJP to drop CAA 2019 from its West Bengal campaign?

If the corporate-controlled press is to be believed, then it’s the massive unrest over the anti-farmer agriculture bills and the amendment in the Essential Commodities Act, 1955, which has pushed the BJP in backfoot. The press is estimating that the BJP will dispel misunderstandings about the farm sector reforms in West Bengal before jumping into the citizenship issue. However, that’s not the case. The BJP isn’t making any attempt to reach out to the farmers of Haryana and Punjab, the two states that have experienced large-scale protest movements. Rather, West Bengal, a state with relatively small landholdings, where the concept of minimum support price for crops isn’t even common for most farmers and where the contract farming model was implemented years ago, didn’t see much of farmers’ movements, except those by the organisations affiliated with the ailing parliamentary left.

The sole reason that forced the BJP to drop CAA 2019 campaigning during the Durga Puja is the resurgence of new anti-NRC movement in the state, demanding a new, humane CAA. The BJP knows that the Bengali refugee sentiments are deeply connected with the plight of 1.7m Bengalis out of 1.9m people who were rendered stateless through the NRC exercise carried out in Assam in 2019. The majority, ie, 1.2m people among them are Bengali Hindus, while around 500,0000 people are Bengali Muslims. The BJP, despite promising to scrap this NRC––conducted under the Supreme Court’s observation––and redo the exercise with pan-India NRC. But then, the BJP government in Assam isn’t providing citizenship to any of these 1.2m Bengali Hindus through the CAA 2019, a reason why it didn’t publish the rules for the amendment.

Prime Minister Narendra Modi and his close aide, Union Home Minister Amit Shah, know that if the rules of the CAA 2019 is published, then the common people will understand that it’s not freeing all non-Muslim refugees from Afghanistan, Bangladesh and Pakistan from the “illegal migrant” status that the CAA 2003 has imposed on them. It will also show if the rules are published in conformity with the amendment, that none of the 1.2m people left stateless in Assam, or those Hindus who have been detained under the Foreigners Act, 1946, in Assam, can apply under the CAA 2019 for relief. Further probing over the CAA 2019 by the Namasudra community––especially the politically-crucial Matua sect––will cause severe political ignominy for the BJP. For this reason, the BJP won’t traverse that treacherous turf at such a crucial hour. Rather, it will focus more on anti-Muslim issues in the state, especially using the arrest of Muslims by the National Investigation Agency for alleged al-Qaeda links.

It’s the resurgence of a new phase of anti-NRC movements in West Bengal, which is mobilising the Namasudras, the indigenous tribal people and even a section of the upper-caste Hindus against the draconian provisions of the CAA 2003, along with the Muslims, that is causing severe discomfort for the BJP, as it fears a reversal of the gains it made in the state through communal polarisation and xenophobia over “Muslim aggression” through “infiltration”. It’s therefore normal for the BJP to drop CAA 2019 as its prized possession.

The BJP’s fears are coming true as multiple organisations representing the Namasudras, indigenous people, Muslims, etc, have joined hands to build up a new movement demanding a comprehensive amendment to the Citizenship Act, 1955, which will ensure citizenship to each and every poor people and the victims of partition, without religious discrimination. Movements are built at the grassroots and many organisations that formerly had an affiliation with the BJP, have even switched sides knowing the hollow character of the CAA 2019. As these developments forced the BJP to drop CAA 2019 as the focal theme of its Durga Puja campaign in poll-bound West Bengal, it’s evident that the intensification of the new movements for a comprehensive and humane CAA will further push it towards the wall.