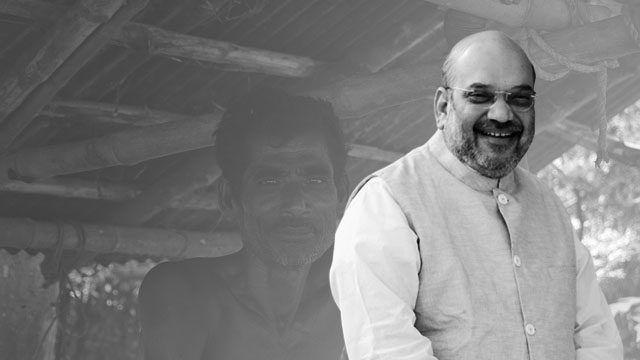 Union Home Minister Amit Shah’s West Bengal visit has caught the attention of the national press as he is taking potshots at the Trinamool Congress (TMC) rule and Chief Minister Mamata Banerjee. This two-day-long visit is seen as an attempt to fix the internal strife that’s putrefying the Bharatiya Janata Party (BJP) in the state before the crucial assembly election, which the saffron camp is trying to sweep.

While the major issues are related to the anger over the non-inclusion of millions of displaced victims of partition in the Citizenship (Amendment) Act, 2019 (CAA 2019), depriving them of citizenship, and the agony caused by the threat of a National Register of Indian Citizens (NRIC/NRC), which will disenfranchise millions of tribal people, Dalits and Muslims, there are other issues, caused by an intra-party feud over the booty, for him to resolve.

But during Shah’s West Bengal visit, what caught everyone’s attention is him dining at a tribal and a Matua––a Bengali Dalit or Namasudra sect that has suffered immensely due to the partition––household. A political drama and series of rhetoric followed with the Union home minister’s visit.

Where Shah would eat during his visit isn’t a matter anyone else should poke their nose in. However, as the names of the individuals were not disclosed in advance, unlike the name of a famous classical singer or the iconic Dakshineswar Kali Temple, where he will offer prayer, it, therefore, means that the BJP picked random tribal or Matua households, who can be a safe bait in its endeavour to create political optics.

It means the BJP is using this dining as a political event, rather than a genuine visit to someone’s house. The BJP is expecting that the optics of Shah eating in a tribal house and a Dalit house will pay a rich political dividend to it in the state and beyond.

Earlier, in 2017, Shah, as the BJP chief,  visited Dakkhin Katiajote village, near the iconic Naxalbari hamlet of Darjeeling district, from where the left-wing anti-feudal armed struggle spread all over India in May 1967. He ate at a Dalit household and it created an optics that remained in the subconscious of the ostracised community members for long.

By captivating the Dalits with such optics, the BJP increased its total Lok Sabha seat tally in West Bengal from two in 2014 to 18 in 2019 Lok Sabha election. The BJP’s 2019 tally predicts a clear sweep in more than 143 seats in the 294-seat West Bengal Assembly in 2021 if it can retain the voters. Thus, hoodwinking the Dalits and tribal masses is important for the BJP.

But the challenge that made Shah’s West Bengal visit inevitable is the simmering anger among the tribal masses and the Matua community over BJP duping them and the NRC threat, which looms over the fate of these marginalised people. While the tribal communities organised around 500-600 Asur Smaran Sabhas (Asur commemoration events) until 2018-19, countering the mainstream Durga Puja by Bengali Hindus, which is a festival celebrating the subjugation of the aboriginal tribal people by Aryan invaders, the number of such events has gone up to 2,000 in October 2020 and is expected to grow up to 15,000 in 2021.

This happened due to a resurgence of discourses on tribal history, culture and its separation from the Hindu religion, in which the BJP and its parental body Rashtriya Swayamsevak Sangh (RSS) want to engulf the tribal people. The tribals, especially of South Bengal, in the BJP’s Hindutva citadel of Bankura and Purulia districts, have decided to obstinately resist the saffron camp from entering their territory, as Milan Mandi, the leader of Adivasi Bikash Parishad claimed during the ceremony. It’s a major setback to not just the BJP’s poll prospect but also to the RSS’s long-term social-engineering project.

Throughout West Bengal and other states, as well as in Bangladesh, the Matua community, influenced by nineteenth-century social reformer Hari Chand Thakur and his son, Guru Chand Thakur, looks up to the Thakurbari, ie, the abode of the Thakur duo’s successors, for spiritual guidance and leadership.

The community, which denounced Brahminical norms and customs at one point in time, was wooed by the Hindutva fascists since 2014. The inherent Islamophobia among the displaced people was used by the RSS to implant its vicious doctrine within the community that was built with a progressive vision by the father-son duo.

The BJP had dangled the bait of Indian citizenship by showing the CAA 2019. Earlier, another CAA––the CAA 2003––brought by the BJP’s Atal Bihari Vajpayee-led regime, turned the Matuas into “illegal migrants” with no scope of legal rescue from the ordeal. But contrary to the BJP’s tall promises, the CAA 2019 failed to address the Matua community’s agony, as it has no provision for citizenship for those who didn’t apply to Foreigners Regional Registration Offices upon their arrival in India.

This betrayal irked the Matuas as well as Shantanu Thakur, the BJP’s member of the Parliament from Bangaon. Thakur is a descendant of the community’s founders and is quite an influential political figure. His victory on a BJP ticket, after a split in the family, can be attributed to the promise of citizenship to Matuas. Now he has himself admitted to his followers that the BJP isn’t going to provide citizenship to the Matuas. The Hindutva fascist RSS even didn’t allow Thakur’s followers to offer water and soil taken from the Thakurbari at the site of the Ayodhya Ram Temple, built on the land of the demolished Babri Masjid.

Therefore, during Shah’s West Bengal visit, these two communities are chosen for damage control. That’s why Shah reached Bankura’s Jungle Mahal area and offered floral tributes to a statue of a tribal hunter, mistaking it for Birsa Munda, the tribal rebel who shook the foundation of British colonial rule in the nineteenth century. This goof-up is quintessential of the BJP’s nonchalant attitude towards the history and culture of the tribal people who the RSS considers of inferior bloodline and wants to subjugate.

When Shah ate vegetarian Bengali delicacies at a tribal family’s house, which most tribals neither eat nor can afford, he created an optics that’s not just unusual but quite abominable as well. It’s a mocking of not just tribal culture but also of their economic condition.

The BJP has been snatching away the water-forest-land rights of the tribal people and giving them over to giant mining corporations that loosen their purse strings to fill its coffers. By privatising coal mining, Prime Minister Narendra Modi’s government is going to allocate tribal people’s land in Jharkhand to big mining giants.

Also, even Shah’s dining won’t save the tribal family from disenfranchisement once the NRC exercise starts and the government demands from them pre-1948 legacy documents to prove their domicile. The tribals of India have no papers that can prove their legacy or family tree to conform to the law. They stand to suffer the most under the NRC. Many tribals will be disenfranchised if the NRC exercise takes place through the validation of the National Population Register exercise, which is done with Aadhaar seeding.

Similarly, eating at a Matua house will not make the BJP Dalit-friendly, especially at a time when the Dalits saw the BJP standing in support of the Hathras gangrape and murder accused and its inhuman treatment of the community. The anti-Dalit stance of the party is what Shah wants to conceal.

This is the reason a random Matua house is figured out for Shah’s West Bengal visit. He will not eat the Namasudra delicacies but carefully selected vegetarian food of the Bhadralok community, ie, the upper-caste Bengali Hindus, exhibiting his dislike for the food habit of the Matuas.

After denying the Matua representatives entry into the Ayodhya site of the demolished Babri Masjid with their water and soil, forcing a Matua household to cook non-meat dishes, consumed by the Savarna Bhadralok community will be another act of cultural sacrilege, which will prove that the BJP wants to uniformise and vegetarianise the diverse people of West Bengal, especially by transgressing into the sacred, non-Brahminical territory of the Matua community.

Rather than providing education to the Matuas––which the founders of the sect considered as a vital weapon against Brahminical oppression––Shah’s BJP will promise them Ram and Hanuman temples and the RSS will depute Hindi-speaking, Brahmin priests for such temples and that will reverse the little gains the sect has made in its course of survival. Shah’s West Bengal visit and dining at a Matua house won’t bring the gift of citizenship for the community as the CAA 2019 categorically excluded them from the list of beneficiaries, rather, the Damocles sword of NRC will continue to hang over their heads.

Despite repeated requests from different Matua and tribal personalities to save them from the NRC, Shah gave no assurance. He told the agonised people that they will get citizenship if the BJP comes to power in the state, which is a replica of the Assam model, where 1.9m people were left out of an NRC.

Until the 2021 elections, the BJP will continue with stunts and shows like Shah’s West Bengal visit. It’s desperate to retain the growth the party achieved in the course of the last few years and to wrest control of the chief minister’s seat by ousting the TMC. The BJP knows that the TMC, with a tarnished image of Banerjee, can’t regain its lost ground in the state and the Congress, along with its lackey, the ailing Left Front, are dilapidated beyond repair. Thus, there is no credible force to challenge the BJP’s hegemonic quest.

Shah’s West Bengal visit mocked the tribal and the Matua people, along with millions of poor people, especially those displaced due to the partition. This visit is an attempt by the BJP to ensure that the tribals and Matua people can be kept as a captive audience for the party and no disillusionment can take place. Therefore, it’s imperative to build a political alternative in the state, outside the narrow confinements of parliamentary alliances. An alternative bloc, which can offer real alternative political, economic and social policies and ensure the unity of the people to thwart the Hindutva fascist juggernaut, is quite important now for saving the people and the resources.