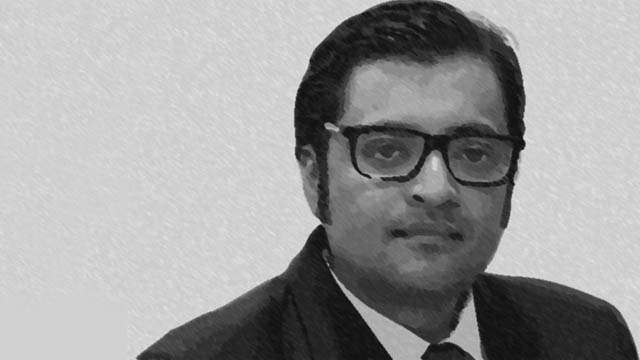 Irony never stops amusing onlookers. What can one say when Arnab Goswami, the notorious and boisterous Hindutva fascist klaxon, who pretends to be a journalist, cries over a purported attack on his freedom of speech? Alleging that two men attacked the car he and his wife were riding on their way back from work past midnight of Wednesday, April 23rd, Goswami accused the Congress party chief Sonia Gandhi of orchestrating the assault. How does irony look, if it had a face, when Goswami talks about the attack on liberty, freedom of speech and press freedom? India, which is reeling under an unprecedented lockdown due to the Coronavirus (COVID-19) outbreak, was amused by the claim of a bigger virus that it’s under threat. How would society react if a virus cries foul? Will the society defend the virus’s rights or will it rejoice knowing how much toxicity the virus has caused over a long period of time?

Goswami filed a police complaint in Mumbai, where the attack allegedly took place and made a video at what appears to be a parking lot to narrate the incident. He claimed that two men on a bike overtook the car around 12.15am on Wednesday. They allegedly tried to shatter the window at the driver’s side and failing which they threw a liquid before fleeing. Goswami claimed that they were goons of the Congress party and were trying to harm him because his reporting has irked the “dynasty”. Though the Mumbai Police has claimed it has nabbed two accused, it isn’t clear how could two men travel on a motorbike chasing a television anchor who enjoys “y” category security amid a lockdown? Moreover, how did Goswami know their political affiliation?

The Republic TV, owned by the ruling Bharatiya Janata Party (BJP) leader Rajeev Chandrasekhar, in which Goswami is the chief editor, publicised the video. It created a social media ruckus. The BJP’s troll-army and men associated with its parental body Rashtriya Swayamsevak Sangh (RSS) amplified the accusation vociferously. Union ministers and BJP leaders condemned the attack and criticised the Congress party. Goswami’s wailing, his shedding of crocodile’s tears came to the limelight while the COVID-19 pandemic and the stories of millions of migrant workers starving to death were thrown at the backburner. The feral right-wing thugs, who bay for the blood of Muslims, opposition members and give rape threats to women, demanded that Goswami’s freedom of speech and expression are protected. Irony had a severe heart attack.

Before Goswami started playing the victim card, many Congress leaders, in Maharashtra and Chhattisgarh, had filed FIRs against him for communalising the Palghar mob lynching incident and for his malicious propaganda and slandering against Sonia. There were serious charges in the FIRs and as these are non-BJP ruled states, therefore, Goswami could’ve been in absolute trouble. While a social media storm was stirred by the BJP’s digital foot soldiers, the television anchor used his clout as a Gadfly of Prime Minister Narendra Modi’s regime, to cajole the Supreme Court to take up a petition filed by him on an urgent basis. Unsurprisingly, the Supreme Court, which has repeatedly displayed, through a large number of recent verdicts and nonchalant attitude towards the pleas filed by the exploited, oppressed and marginalised people, its loyalty towards the Modi regime, accepted Goswami’s plea and barred the police for three weeks from taking any action against him, while keeping only one FIR, filed in Nagpur, active, and staying all others.

This over-enthusiastic response of the Supreme Court came so fast, despite it working on a “priority” and “urgent cases only” basis due to the lockdown, because Goswami is a man close to the BJP, and lately, the apex court, like any constitutional authority, can’t say “no” to the Modi regime fearing a backlash. Thus, while the pleas against abrogation of Article 370 in Kashmir, the imposition of an inhuman lockdown in Kashmir, the enactment of the Citizenship (Amendment) Act, 2019, the Delhi Police’s brutal attack on Jamia Millia Islamia students, the Delhi anti-Muslim pogrom of February 2020, the police atrocities on migrant workers and the poor during the lockdown and the arbitrary arrest of Muslim activists like Meeran Haider, Safoora Zagar, Umar Khalid, etc, on flimsy grounds, are postponed as not urgent, the concocted tale of victimhood peddled by the conman, disguised as a journalist, got the “urgent” tag.

Goswami has been a pathological liar throughout his television career. His new story of being attacked smells like his old lie of being attacked during the 2002 Gujarat pogrom, which was busted by Rajdeep Sardesai. Even after being repeatedly criticised, condemned or confronted – as done by stand-up comedian Kunal Kamra – for his lies, hate-mongering and sheer disrespect towards journalistic norms, Goswami never ceased lying, peddling fake news and fanning Islamophobia using a template that’s fixed by the RSS. Goswami can go to any extent to drive home a point or to set a dominant narrative that can help Modi or the BJP. His nonsense diatribe to vilify Sonia, his attempt to communalise the Palghar mob lynching and his incessant hate-mongering against the Muslims, accusing them of spreading COVID-19 in India, are not only condemned in India but even outside the country.

After their Islamophobia was called out by a few influential Arabs in the Middle East, after the Organisation of Islamic Countries lambasted Indian ruling clique for systematically maligning the Muslims by blaming them for the spread of COVID-19, which even forced Modi to tweet an ambiguous message of harmony to appease the Arabs, and after their attempt to communalise Maharashtra’s Palghar incident failed, the story of an attack and playing the victim card are Goswami’s frantic attempts to earn back the lost television ratings and to engage the Hindutva fascist camp in hate-mongering. This same Goswami had cheered the killing of Gauri Lankesh, a fierce journalist who dared the Modi regime, in 2017. The same Goswami who called for gagging those journalists who don’t toe the government’s line is now crying foul, making TikTok-style videos to do cheap theatrics so that his channel’s viewership increases and his ratings, which are falling, also increases?

Freedom of speech, expression and dissent are quite important in a parliamentary democracy to ensure that the rulers don’t strip the people of their rights, which are won through hard and bloody struggles. It’s especially very important that the journalists who objectively present the truth, enjoy the freedom to act without any intimidation. However, under Modi’s sclerotic rule, press freedom – or whatever of that sort ever existed in India – has been tossed away to the oblivion. The only thing expected from the press right now is exhibition of utmost and unconditional servility towards the government. Goswami truly epitomises, due to his unmatching bootlicking skills, what ideal yellow journalism should be in Modi-fied India.

In such a precarious situation, when India’s position in World Press Freedom Index fell to 142 out of 180 countries, it’s no wonder to see the Jammu & Kashmir Police slapping the draconian Unlawful Activities (Prevention) Act on a renowned photojournalist, Masrat Zahra, for posting her photographic work on social media, or the same police force filing FIRs against journalists like Peerzada Ashiq and Gowhar Geelani for their writing. It’s not surprising in a country, where Modi shows the audacity to order the media owners and top editors to publish only positive stories regarding the COVID-19 pandemic and refrain from criticising the government a few hours before announcing the nationwide lockdown on March 24th 2020, that journalists will be persecuted for telling the truth to the powers. What’s surprising is that a government lackey has to resort to a TikTok-style cheap street drama to draw attention and spin a narrative of victimhood only to save himself from police cases.

Can India allow people like Goswami to identify as journalists when they are nothing but the unofficial loudspeakers of the Modi regime? Goswami is shamelessly maligning Sonia repeatedly to score political brownies. But the question is when the majority of the country is barely bringing food to the table for their survival, how much can Goswami’s melodrama influence people? A journalist, upright, honest and brave, will always stand by truth no matter what. While people like Goswami will keep maligning the profession, more and more new-era journalists must come out and wage a battle to seek and analyse what’s truth. It’s time that Goswami and his ilk are flushed down the annals of history along with the fascist regime that’s nurturing them. A society can rejuvenate and detoxify itself only when such filths are purged through the collective efforts of its progressive people. Or else, its future is doomed under fascism.