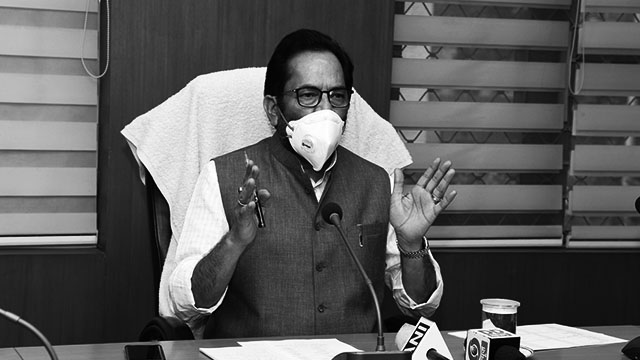 Mukhtar Abbas Naqvi and Shahnawaz Hussain are the only two leaders with a Muslim name at the higher echelon of the ruling Hindutva fascist Bharatiya Janata Party (BJP).  No wonder, whenever the BJP or Prime Minister Narendra Modi’s regime is accused of promoting bigotry, inciting anti-Muslim pogroms or fanning lynching of Muslims, these two are sent at the frontlines to show the Muslim face of the Hindutva fascist party. While reacting to the Organisation of Islamic Cooperation’s (OIC) allegation that Islamophobia is mainstreamed in India, Naqvi said India is a “heaven for Muslims”. This metaphor backfired and Naqvi, the only Muslim minister in the Modi regime, was rebuked not just in India, but globally.

It all started on Thursday, April 16th, when Princess Hend Al-Qassimi of the UAE – the country that awarded Modi its highest civilian order earlier – spoke against an Indian expat spewing Islamophobic hatred on the micro-blogging site Twitter. The Indian expat, named Saurabh Upadhyay, accused the Muslims in India of spreading Coronavirus (COVID-19), taking a cue from the sheer Islamophobic propaganda done by the Hindutva fascist media outlets. Al-Qassimi warned the Indian expats that the UAE, through its tough law against hate speech, will penalise perpetrators and make them leave the country. She faced a barrage of hate messages from the Indian Hindutva fascists, which irked her further and the matter caught the attention of the entire Middle East.

Many influential Arab netizens started criticising communal hate-mongering in India and rebuked the Indian press for its incessant systematic vilification of the Muslims on behest of the Modi regime. The UAE and other countries of the Gulf with a large Indian expat population, like Bahrain, Oman, Qatar, etc, joined the league to oppose Islamophobic ranting on social media by the BJP’s hired thugs and its toady press. On Sunday, April 19th, the OIC, which is the second-largest inter-governmental organisation after the United Nations with a membership of 57 states spread over four continents, complained about India’s anti-Muslim political discourse and how Islamophobia is normalised by Modi’s ruling dispensation.

A scared Modi, who tried to engage India with the OIC and even sent late Sushma Swaraj, the former external affairs minister, to its meet, tweeted an ambiguous message stating the importance of unity in fighting COVID-19. He pushed the panic button and all diplomatic staff in the Gulf were ordered to rebuild the bridge with Arabs. While the diplomatic staff were trying to mend ties and combat the efforts undertaken by Pakistan to isolate India in the region, Naqvi was deployed at home to do the firefighting by taking an indirect pot-shot at the OIC members. At that point in time, Naqvi asserted that India is a “heaven for Muslims”. Very soon the internet flooded with memes of Naqvi, who, along with Hussain, has earned the fame of being a “Sarkari Muslim” – the state’s lackey Muslim – for his utter disregard towards the plight of the community and for sucking up to power.

Naqvi’s portrayal of India as a “heaven for Muslims” brought up the deep wounds inflicted upon the minority community by Modi’s Hindutva fascist BJP and its parental body Rashtriya Swayamsevak Sangh (RSS), which aims at disenfranchising and turning the Muslims into a second-class citizen in India. Incidents like numerous mob lynching of Muslims since 2014, when Modi ascended to power, followed by the recent macabre police atrocities on students of prominent Muslim institutions like Aligarh Muslim University, Jamia Millia Islamia University, the police atrocities on Muslims protesting against Modi’s contentious citizenship matrix in Karnataka and Uttar Pradesh in December 2019, the vilification of Muslims during the Delhi Assembly election, the Delhi anti-Muslim pogrom in late February, during US President Donald Trump’s visit, and the rabid Islamophobic slur-mongering by the mainstream press over the Nizamuddin Markaz congregation of Tablighi Jamaat sect hold up the mirror to the likes of Naqvi to show them the grotesque image of their fascist rule.

There was no heaven in India for the Muslims since the new Republic was formed after a bloody partition of the British Indian territory into a Hindu-majority India and a Muslim-majority Pakistan. The communal division of land, culture and fraternal chord of the society made the minorities in each of these countries into an “other” people. Once they’re “othered”, it becomes quite easy to persecute the minorities for their beliefs, for their identity. By integrating “nationhood” with a particular religious identity, which the RSS is infamous for, it becomes easy to blame the minority of being “anti-national”. For decades the Muslims suffered pogroms, vilification and socio-economic ostracization, which made their lives worse than that in hell. Calling a hell heaven can be Naqvi’s cheap stint, but for the poor, hapless and powerless Muslims, it’s an unending ordeal.

By calling India a “heaven for Muslims”, Naqvi mocked 200m Muslims of India. Irrespective of what the Arabs say, the Indian Muslims don’t want heaven on earth but simply their own India where they can be treated as equal citizens under a constitutional and secular rule, with equal access to resources and opportunities. All they seek is a normal life in which they don’t have to be apologetic for their identity. The Muslims believe in the concept of heaven in the afterlife; all they want in the present is a normal, non-stigmatised life without the constant fear of getting lynched for their immediate identity. Can Naqvi, the minister for minorities, guarantee them this little?