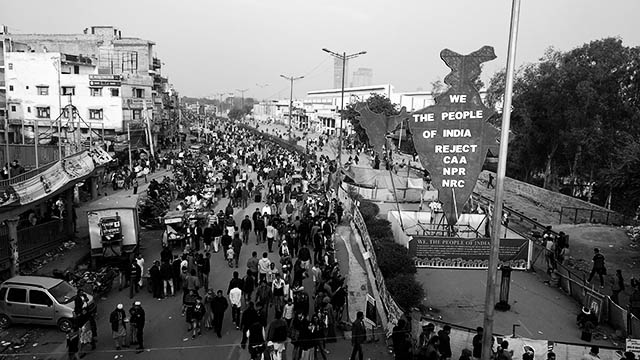 The health calamity which has been unexpectedly engendered by the COVID-19 pandemic has stalled the agitations against the Citizenship (Amendment) Act, 2019, or the CAA. The Shaheen Bagh protest was removed ad interim. Shaheen Bagh-like protests in other cities like the women’s anti-CAA protests in Aligarh, Prayagraj (Allahabad), Lucknow and Saharanpur were also removed. It seems that only after a prolonged hiatus, the protests would again be revived. Many concerned citizens justifiably ponder over the likelihood of a revival of the movement. To obviate this future democratic deficit, it is imperative that the citizens device new creative agitational techniques and consider the possibility of organisationally streamlining the resistance movement.

The question of the organisational structure of the anti-CAA protests can be regarded as a fundamental question. The anti-CAA protests have mainly been leaderless acts of resistance or what is also called phantom cell structure. Leaderless movements don’t possess any particular central power edifice. They are largely decentralised and there is almost an absence of vertical or hierarchical command structure. There are some specific strategic advantages of leaderless movements. Due to the non-existence of a power centre, it is difficult to destroy these movements. The movement remains diffused and this diffuseness prevents the establishment from destroying the possible major links of the agitation. On the other hand, conventional protests with a conspicuous power centre are immediately weakened as soon as their leaders or power sources are annihilated.

But to make a resistance movement substantive and sustainable, a central organisation is indispensable. Vladimir Lenin, in his book “What is to be done?”, emphasised the need to develop a “tightly-knit group of professional revolutionaries”. The construction of a centralised power structure was a sagacious tactical manoeuvre because it provided the skeletal administrative framework which could facilitate militant mass movements. Under the leadership of the Bolshevik Party, the revolutionary spontaneity of the rebellious proletariat was effectively utilised. The Indian freedom movement is another historical event which corroborates the necessity of a central organisation.  In this case, the Indian National Congress was the organisation giving coherence and ideological consistency to the toiling Indian people. During the Non-Cooperation Movement, the Congress party decided to ameliorate and augment itself by establishing a Working Committee of 15 members. This decision was taken due to the realisation that a permanent and sturdy committee of Congress workers was needed to operationalise mass-based political activism and also to weld and unify the organisation itself.

The political conditions of India require an organisation that is extremely participatory and is in fact, a “semi—organisation”. If the Indian people are successful in developing this semi-organisation, then they can orchestrate a highly coordinated and flexible resistance movement. In this semi-organisational architecture, the phantom cell structure would co-exist with the central organisation. The central organisation would play a limited role in the whole leaderless movement and would confine itself to intellectual and articulatory practices. Intellectual articulatory practices are integral components of constructive or prefigurative movements. In these movements, the destruction of undesirable elements is followed by the creative construction of new ideas and elements. That is why the desire for destruction is a creative desire. In the process of construction, the ordinary people would also participate, and their creativity would be shaped and nurtured by the intellectuals and members of the central organisation. Tasks such as increasing the spatial spread of the movement and systematising different nodal points will be done mainly by the people themselves. Through the balanced unity between central organisation and the phantom cell structure, the movement will become resilient, agile and organised.

This central anti-CAA organisation can preferably be a group of civil society activists, constantly sharpening the consciousness of the masses. The fundamental functions of this civil society group can be identified as:

(1) Leaderless resistance movements are susceptible to false flagging which is done to besmirch the reputation of a particular movement. In order to defuse the obfuscation created by false flagging, the group of civil society activists has to present clarifications and remove the blot of culpability.

(2) The organisation of civil society activists has to culturally enrich the agitating people. Here, cultural enrichment refers to the democratic transformation of the individual. The ultimate goal of this type of pedagogic programme is to exterminate political passivity and make the people “sentient subjects”. Within this cultural programme, the seeds of a “war of position” can be located. According to Antonio Gramsci, the war of position is a surreptitious and quiet war which is fought on the ideological plank. By critically culturalising the people, the group of civil society activists will gradually unfurl its revolutionary ideological content and will prepare the masses to fight the war of position.

A major feature of protest movements is the dismantling of symbols of power and authority. Anti-CAA protests have performed many such acts of dismantling. The use of the Indian flag and reading of the preamble are actions which have fulfilled the dual functions of re-appropriation and destruction of regressive interpretations. Non-violent heroism is another agitational technique which has to be used by the protesting citizens. By determinedly facing violent oppression from the ruling authorities, the people pulverize the whole ammunition of the oppressors by refusing to recognize its might. This can be best reflected by Dharasana Satyagraha, which occurred during the Indian National Movement. The participants of this Satyagraha were brutally beaten by the police with clubs. This left two dead and 320 injured but nobody resorted to violence and in the words of Webb Miller “Not one of the marchers even raised an arm to fend off the blows”. It is these instances of steadfastness and non-violent heroism which the Indian citizenry has to adopt.