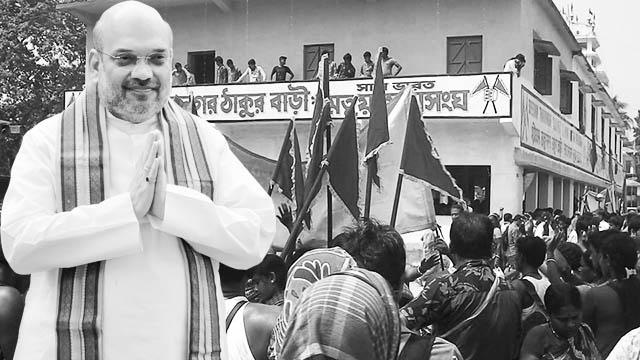 On May 28th 2021, the Union Ministry of Home Affairs (MHA) issued an order— S.O. 2069(E)— through Gazette notification empowering the district collectors of selected districts of Chhattisgarh, Gujarat, Haryana, Punjab and Rajasthan to scrutinise, verify and approve the applications of citizenship under section 5 (citizenship by registration) and section 6 (citizenship by naturalisation) of the Citizenship Act, 1955, made by “any person belonging to minority community in Afghanistan, Bangladesh and Pakistan, namely, Hindus, Sikhs, Buddhists, Jains, Parsis and Christians”. This MHA order on citizenship has stirred a controversy over the government’s ulterior motive.

This MHA order on citizenship is applicable only in Gujarat’s Morbi, Rajkot, Patan and Vadodara, Chhattisgarh’s Durg and Balodabazar, Rajasthan’s Jalore, Udaipur, Pali, Barmer and Sirohi, Haryana’s Faridabad and Punjab’s Jalandhar district. The home secretaries of Haryana and Punjab are also empowered to scrutinise and provide citizenship certificate, except in Faridabad and Jalandhar districts.

Prime Minister Narendra Modi’s so-called opponents called this a backdoor entry of the controversial Citizenship (Amendment) Act, 2019 (CAA 2019). Facts are twisted by different Opposition leaders, especially Sitaram Yechury, the general secretary of the Communist Party of India (Marxist) [CPI(M)], to prove that this MHA order on citizenship is linked with the CAA 2019. Such political debauchery has been helping Modi’s Bharatiya Janata Party (BJP) immensely.

Using the Gazette notification, the BJP restarted hoodwinking the Matua refugees living in West Bengal. Recent West Bengal Assembly elections’ results show that a large number of Matuas voted against the BJP, vis-à-vis the 2019 Lok Sabha elections, due to their realisation that the CAA 2019 is a hoax, and they won’t be provided citizenship by the Modi regime. Union Home Minister Amit Shah’s false promises didn’t work as well. The BJP’s member of the Parliament and Matua leader Santanu Thakur is now trying to woo the Matuas again with the bait of the CAA 2019 by showing the recent MHA order on citizenship.

The CAA 2019 offers scope to 31,313 people, belonging to the minority communities of Afghanistan, Bangladesh and Pakistan, who entered India due to “religious persecution” in their home countries on or before December 31st 2014, with or without legal travel documents. These 31,313 have registered themselves as “victims of religious persecution” and have got long-term visas (LTVs) from the Central Government and are exempted from the Passports (Entry into India) Rules, 1950, and the Foreigners Rules, 1948, through the amendments made in 2015 and 2016. No one else can apply for citizenship under the CAA 2019. This is a reason that the MHA has refrained from publicising the Rules of the CAA 2019, even after 18 months, as it will expose the law’s hollowness before the Matuas and other Bengali-speaking refugees.

The present order, as published in the Gazette, has nothing to do with CAA 2019 as the law is not under force. The present order is valid for people “belonging to minority community in Afghanistan, Bangladesh and Pakistan, namely, Hindus, Sikhs, Buddhists, Jains, Parsis and Christians”, and not exclusively for the victims of “religious persecution” and has no cut-off date for entry into India. However, as naturalisation needs seven years of continuous stay in India, it’s 2014 that can be the cut-off year for the applicants. It talks about the present application processing and not future applications under the new law when its Rules will be publicised.

As the Citizenship Act, 1955, amended through the draconian CAA 2003, has stopped the registration of citizenship or naturalisation after seven years of stay for those tagged as “illegal migrant”, ie, people who can’t prove their citizenship using legacy documents dating back to 1948, so the only people whose applications will be processed are those with LTVs. The LTVs are given to only those who had applied at Foreigners Regional Registration Offices (FRROs) of their respective regions for extending their stay in India after entering the country. Millions of Bengali-speaking non-Muslim refugees living in India didn’t apply for LTVs at FRROs and, therefore, they aren’t eligible even to apply, leave alone getting citizenship.

More than 200,000 people hold LTVs, as per the government. Out of them, 31,313 have got LTVs after fulfilling the required formalities of proving “religious persecution” as the reason. Between 2011 and 2014, ie, after the Citizenship Rules, 2009, was publicised, former prime minister Manmohan Singh’s United Progressive Alliance (UPA) government gave LTVs to 14,726 Hindus from Pakistan. In 2018, the Modi regime had publicised a similar notification.

At most, these 14,726 and other LTV holders belonging to the minority communities of the three countries, who have applied for registration and naturalisation, can have their applications scrutinised and verified. This will exclude the Bengali-speaking refugees, especially the Dalit Matuas, Namasudra community members and others, as they neither have LTVs nor are recognised as “refugees” by India. The only beneficiaries of this will be refugees from Pakistan who entered India with valid travel documents and applied for LTVs to extend their stay.

Though the Central Government took away the right from the district collectors/ magistrates to provide citizenship under section 5 and section 6 in 1986, when the CAA 1987 was getting publicised, it can grant authority to process citizenship applications or grant citizenship certificates to competent authorities as per section 16 of the Citizenship Act, 1955. The same provision is used now to allow the district collectors and state home secretaries to process the applications.

At a time, when the BJP and the Modi regime are on the back foot due to the gross mismanagement and aggravation of the COVID-19 crisis, economic mismanagement and high unemployment, there is a clear attempt to sell a new narrative. The BJP wants to portray the Modi regime as a “Hindu saviour” while concealing the fact that thousands of Hindus in the BJP-ruled Gujarat, Madhya Pradesh and Uttar Pradesh have died due to the gross mismanagement and, in most cases, aggravation of the COVID-19 crisis. The poor Hindus of Uttar Pradesh even had to bury dead bodies in the riverbanks as they couldn’t afford cremation. Thousands of Hindu corpses are found floating in the River Ganges.

This narrative around providing citizenship to Hindus from Pakistan also conceals the fact that the Hindus of India, especially its Dalits, face an imminent threat of disenfranchisement through the National Register of Indian Citizens (NRIC or NRC) exercise, mandated by the CAA 2003. It’s to prevent the Hindus from joining the anti-NRC movements, especially in West Bengal, that the BJP peddled the fake news that the CAA 2019 will rescue Hindus from the NRC exercise, which is blatantly false.

Still, the Opposition is peddling the “Muslims under attack” theory to weaken the anti-NRC movement by showing it as a purely Muslim issue, which leaves the Dalits, the tribal people and other marginalised non-Muslim communities vulnerable. The citizenship movement is reduced by the Opposition to merely anti-CAA 2019 movement, to ensure that the NRC issue remains untouched. It’s for the same reason that the Congress party, the CPI(M) and others have created a ruckus over the new MHA order on citizenship.

At present, India has a major refugee crisis, which has been a perennial one. Millions of Bengali-origin refugees, mostly Dalits and backward castes, are suffering as their citizenship remains in limbo for seven decades and no political party has promised them unconditional citizenship by repealing the CAA 2019, CAA 2003 and CAA 1987, and by enacting a new, comprehensive and humane citizenship law that will provide an inclusive solution.

The MHA order to provide citizenship is going to help a handful of registered refugees; it won’t help the majority of refugees, the victims of partition. To resolve the citizenship impasse, it’s time to raise the demand for unconditional citizenship for all Indian people as well as restoration of the right to citizenship by birth. Both the government and the Opposition have resorted to rhetoric-mongering on the citizenship issue and are adding a communal shade to it, to divert the masses. It shows that neither wants citizenship for the refugees.