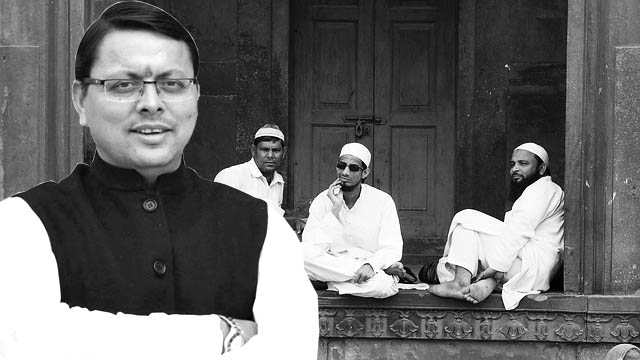 Before going to polls in early 2022, Uttarakhand‘s latest Chief Minister Pushkar Singh Dhami started communal polarisation by spreading Islamophobia. Under the ostensible goal of stopping “migration” from the hill state, the Bharatiya Janata Party (BJP) government has been using the state apparatus to demonise the Muslim community by blaming it, without naming, as the cause of out-migration in different parts of the state.

A recent government order claims there has been an “unprecedented” rise in the population of a certain community in some parts of the state that has led to the migration of members of a “certain community”. “Due to unprecedented rise in population in certain areas of the state, the demography of those areas has been majorly affected. And due to this demographic change, members of a certain community are forced to migrate from those areas. Also, there are possibilities that the communal harmony in those areas may be disturbed,” the government order said.

The government also ordered all district-level police officers and magistrates to set up “peace committees”, track “illegal land deals”, prepare a list of “outsiders” with criminal antecedents, to check that no land is sold “under duress” and, above all, identify “foreign nationals” living with forged ID proofs like voter ID.

This order not only showed that the government is attempting to persecute the Muslims, it’s also trying to use the Foreigners Act, 1946, and the Citizenship (Amendment) Act, 2003 (CAA 2003) to disenfranchise and detain people according to its whimsical fancy. If that happens then not only the Muslims, even the Bengali Hindu refugees living in Uttarakhand will come under fire.

Dhami rolled out this Islamophobic project after a BJP leader, Ajendra Ajay, wrote to him in July that the Muslims of the state have started a “land jihad”—a leitmotif conspiracy theory used by the Hindutva fascist camp accusing Muslims, one of the most socio-economically backward communities in India, of driving away Hindus by buying their properties—and requested him to act.

Ajay’s allegations came soon after the High Court questioned the logic behind the ban on slaughterhouses in Haridwar. The High Court asserted that democracy means the protection of the minorities, which embarrassed the BJP-led government in the state.

Soon after this, 35 organisations affiliated with the Rashtriya Swayamsevak Sangh (RSS)—the parental body of the BJP and the fountainhead of global Hindutva fascism—complained to Dhami that the Muslim population has increased manifold in four districts – Dehradun, Haridwar, Udham Singh Nagar and Nainital. The RSS haven’t disclosed to the public how it calculated a population growth in four districts before the official 2021 Census exercise. There has been no clarification that even if the Muslim population has increased, why it is considered as a problem by the state government.

The Hindu and Muslim population data of Uttarakhand and their growth from 2001 to 2011 is shown in the table below:

According to the 2011 Census, the religious data of the districts are as given below:

Until now the 2021 Census data collection has not started. The 2021 Census is a part of the National Population Register (NPR) exercise—the prelude to the National Register of Citizens (NRC) mandated by the CAA 2003—and is stalled due to the immense mass anger against the exercise. When the 2021 Census exercise is itself in limbo, what became the source of the RSS’s allegation regarding the demographic change in the four districts? What made the Uttarakhand government believe that Muslims are the cause of Hindu exodus from the state?

Former chief minister Trivendra Singh Rawat formed a commission headed by a retired Indian Foreign Service officer SS Negi to investigate the issue of migration and suggest corrective actions. The SS Negi Commission’s report submitted to the BJP-led government didn’t mention the growth of the Muslim population as any cause. Still, the government, ignoring the data and the SS Negi Commission’s report, went ahead to order the police and the district administrations to enquire about the allegations raised by the RSS leaders.

The myth of Muslim population growth

Starting from Gujarat, the ‘land jihad’ allegation has been used by the BJP-RSS to attack Muslims in different states, especially in Haryana. The BJP achieved success in polarising the Hindus by hyping the conspiracy theory that the Muslims are collectively buying lands in “Hindu areas” to oust the majority community. In the past, the BJP used this conspiracy theory to allege an exodus of Hindus in Kairana, Uttar Pradesh, and Gurgaon, Haryana.

The roots of the “land jihad” propaganda lies in a heinous narrative set by the RSS through years of propaganda. To stoke anti-Muslim sentiments, the RSS has been claiming for decades that the Muslim population is on the rise in India, which will soon outpace the Hindus and make India a Muslim-majority country.

Using the data from past censuses, the RSS and the BJP accused that the Muslims are deliberately growing the population through polygamy and by not opting for family planning. Several RSS-influenced rabble-rouser politicians called the Hindu women to bear more children to combat the rise of Muslims.

Moreover, the research also dealt a blow to the RSS’s xenophobic propaganda that large-scale illegal immigration of Muslims from neighbouring Bangladesh is affecting India’s demography. Though this propaganda was earlier exposed in this article with data, the new study shows that in 2019, the United Nations estimated that 17.5m people born in India are residing in some other countries, while 5.2m people born in foreign countries are living in India. This finding shows how it’s impossible for “illegal migrants” to change the demography of the country or even to influence local politics.

Even the bogey of “love jihad”—a claim that “virile Muslim men” lure vulnerable Hindu women using romantic advances and then marry them by converting them to Islam—didn’t stand ground in the Pew Research survey. It shows that only 0.7% of Indians who were raised as Hindus don’t identify themselves with the religion anymore. Also, it shows that the Hindus are in majority in 28 of India’s 35 states, while the Muslims are only in majority in Jammu & Kashmir and Lakshadweep. Even though these two are Muslim-majority, centrally-administered territories, only 5% of Muslims live in these places; the rest 95% lives in Hindu-majority regions, including Uttarakhand.

What’s going to be the repercussion of the Muslim population growth allegation in Uttarakhand?

The BJP is in a fix in Uttarakhand. It has no achievements since 2017 to show to the people. Rather, by organising the “Mahakumbh”—the largest Hindu congregation in the world—in Haridwar during March-April 2021, the BJP government helped trigger the second wave of COVID-19 in India. Millions were infected within a span of a few weeks.

So far, since 2017, Uttarakhand got three BJP chief ministers. While Rawat was the first chief minister during this period and enjoyed a tenure of four years, he was replaced by Tirath Singh Rawat in March 2021. Soon, Tirath was replaced with Dhami in July 2021, exposing the inner conflicts of the party and its incapability in leading the state government. The BJP not only mismanaged the state, but its reckless pro-corporate policies also led to immense ecological damages, which in turn caused large-scale, catastrophic disasters like floods and cloud bursts.

Neither the Congress party nor the Aam Aadmi Party (AAP) could build up a resistance struggle against the BJP and remain meek. Now, as the BJP is trying to communally polarise the voters by using Islamophobic vitriol, the Opposition has no antidote in its arsenal. This will allow the BJP to consolidate its vote bank by obfuscating its disastrous record in administering the state.

If a strong political movement is built by the Opposition on the core political issues and the communal propaganda by the BJP-RSS are exposed in public, the BJP may suffer a humiliating defeat in the 2022 polls. It’s to be seen whether the Congress party or the AAP can vehemently oppose the lies around Muslim population growth and “land jihad”, exposed the propaganda using data. If they can do so, then it will be a major setback for the BJP, and if they don’t, then they will suffer a humiliating defeat in the polls. Whether Dhami and the RSS can manage to win will be seen in a few months.