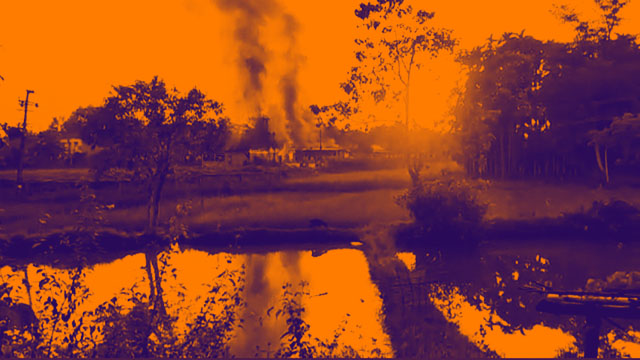 The Bangladesh anti-Hindu riots during the Durga Puja helped India’s ruling Hindutva fascist Bharatiya Janata Party (BJP), and its parent body Rashtriya Swayamsevak Sangh (RSS), to raise the communal tempo in the states of Tripura and West Bengal. Mosques have been vandalised and Muslims attacked in different parts of BJP-ruled Tripura, while there had been one incident of anti-Muslim violence in West Bengal’s northern district of Jalpaiguri. Both states share borders with Bangladesh and house a large number of victims of partition.

On Friday, October 22nd 2021, Jamaat-e-Islami Hind (JIH) officials alleged that a state-wide, concerted anti-Muslim violence was unleashed in Tripura from October 20th onwards. According to a report by Maktoob Media, mosques have been vandalised in different parts of Tripura and Muslim men and women came under attack from feral Hindutva-incensed fascist mobs showing allegiance to the ruling BJP.

A mosque had been burned down in the Maharani region of Gomathi district’s Udaipur. Mosques in Chandrapur, Dharmanagar, Krishnanagar, Panisagar and other places had been burned down as well. The saffron flag was hoisted at the homes of Muslims by the Hindutva fascist thugs, while the police remained a mute spectator.

In separate incidents, 15 policemen have been injured when they tried to disperse the feral Hindutva fascist mob. The JIH complained that the Muslims of Tripura are living in constant fear after these incidents and the state isn’t helping them at all. Rather than stopping the rioters, the police in Tripura, as seen in the video shared on Twitter, can be found asking the Hindi-speaking Muslims to step back from protecting their places of worship.

RSS-affiliated Vishwa Hindu Parishad (VHP) and its youth wing Bajrang Dal, along with the Hindu Jagran Manch (HJM), have been at the forefront of the anti-Muslim violence in Tripura. The VHP, Bajrang Dal and HJM stormtroopers blamed the local Muslims for the recent large-scale anti-Hindu violence in neighbouring Bangladesh. Rallies have been organised by mobilising the local people and Hindi-speaking outsiders where anti-Muslim slogans have been raised in galore.

Though the JIH and other Muslim bodies had condemned the anti-Hindu rioting in Bangladesh in unequivocal terms, the RSS used the optics of Hindu persecution to sell its “Hindus under threat” narrative vigorously. As a large section of Bengali Hindus migrated from present-day Bangladesh to Tripura following the partition of Bengal it has been an easy job to titillate them against the local Muslims using the gory atrocities committed by Islamist fanatics against Bangladeshi Hindus as a catalyst.

The Indigenous Progressive Regional Alliance’s (IPRA) chief, Pradyot Manikya, condemned the attacks and appealed for peace. Manikya tweeted, “Any motivated acts in our state where minorities are attacked as a retaliation to what has happened in Bangladesh must be condemned! Please remember two wrongs don’t make a right …. I appeal for peace amongst all religions in our state. (sic)”

In the last few months, the ruling BJP under Chief Minister Biplab Deb has been facing tremendous pressure in Tripura. The Communist Party of India (Marxist) [CPI(M)], which heads the Left Front that ruled the state for 25 years until 2018, began a state-wide campaign against the BJP. The BJP and the CPI(M) workers, who were led by former chief minister Manik Sarkar from the front, clashed at several places. The police unleashed violence against the left too.

While the CPI(M), with its fast-waning organisational strength, was fighting the BJP at the grassroots to revive the spirit of its voters before the 2023 polls, West Bengal’s ruling Trinamool Congress (TMC) has forayed into the state and is trying to split the BJP as well as forge alliances with different indigenous people’s organisations that are disillusioned with the saffron rule. The TMC is keen to make inroads in Tripura and become the principal opponent of the BJP by driving the ailing left to the margins.

As the BJP failed to fulfil any of its 2018 poll promises, especially Prime Minister Narendra Modi’s much-hyped chimaera called HIRA (abbreviation of highways, infrastructure, railways and airports, the abbreviation also means diamond in Bengali), remain unfulfilled, as unemployment in Tripura hovers around 15.3% in October 2021 when the national average of India is 8%, fuelling communal tension remains the only path available to Deb’s regime to disrupt any people’s unity initiative against the Hindutva fascist rule.

In West Bengal, where the BJP suffered an ignominious defeat in the last assembly elections held earlier this year, the situation isn’t better under Chief Minister Mamata Bandopadhyay, who is the self-styled opponent of Modi and his Hindutva fascism-driven politics. Massive anti-Muslim violence took place in the Bankali Bazar area of Jalpaiguri district’s Mainaguri.

A clash between the ruling TMC supporters—who happen to be Muslims from the indigenous Rajbongshi tribe—and the followers of the BJP head of the local self-government called Gram Panchayat, who are mostly non-Muslim Rajbongshi tribals and Hindus belonging to the ostracised Dalit community, at Dharampur Gram Panchayat office on Saturday, October 23rd 2021, triggered a series of anti-Muslim violence.

Though the clash took place at noon over the village head’s whimsical distribution of COVID-19 vaccine doses under his quota, it snowballed into communal violence by the evening affecting five blocks. Some BJP workers attacked and vandalised two madrassas and threw stones targeting Muslim houses in the Sardarpara area.

The attackers, mostly Rajbongshi tribals, threatened the local Muslims, also of Rajbongshi origin, of dire consequences if they don’t stop Azan (Muslim call to prayer from a mosque). They also questioned why the number of those offering prayers is increasing– a baseless accusation according to the local people.

Later, the BJP’s miscreants attacked a madrassa-cum-mosque (a Waqtiya Masjid, where Friday congregations are not held) in the Golabari area where the cleric, while praying, didn’t answer them. The cleric and two madrassa students, who are minors, were beaten by the mob and two of them sustained grim injuries. A fracas ensued and the mob started rampaging in the area.

This ruckus sparked communal tension in the area between the Rajbongshi Hindus and Muslims, who had been living in harmony for a long time in northern parts of West Bengal. Rapid Action Force and armed police forces were deployed to thwart any untoward incident and the situation normalised by Monday, October 25th.

Though there had been earlier instances of communal tensions in Jalpaiguri between the Bengali Hindu migrants from present-day Bangladesh and the local Muslims, the switching of the non-Muslim Rajbongshi tribals to the Hindutva camp, following the BJP-RSS’s intense communal polarisation exercise, resulted in this new enmity. The local Muslims, especially the Rajbongshi Muslims, are worried over the recent development as they fear that the vitriolic propaganda against the minorities and their demonisation by the RSS has percolated deep inside the non-Muslim tribal society.

Even though the police arrested four local Rajbongshi supporters of the BJP, the villagers have not filed any complaint. It’s reported that the local BJP leaders, who belong to the ostracised Dalit community, later visited the Bankali and assured the Muslims of their safety, calling the violence—during which the BJP workers had blamed the Muslims for the anti-Hindu violence in Bangladesh—a fringe incident. The BJP leaders even told the Muslim villagers that the saffron party’s workers will guard their homes if they feel insecure.

The anti-Muslim violence in Jalpaiguri happened just before Chief Minister Bandopadhyay was scheduled to visit the northern districts of the state. The West Bengal government has been showing conspicuous servility towards the alarming situation created by the RSS-led Hindutva fascist camp’s constant Islamophobic propaganda in the state, especially in northern districts where the saffron camp is running a separatist movement. Rather than combatting the menace politically, Bandopadhyay has been busy weaning away BJP’s legislators and top leaders to her TMC. This has turned the TMC into a docile tool in the hands of the RSS.

Anti-Muslim violence in Tripura and West Bengal under the guise of opposing anti-Hindu violence in Bangladesh is part of a nefarious scheme of the BJP-RSS, which is designed to ensure social fissures between the majority Hindus and minority Muslims widen, communal tension continues to brew and the people’s attention can be easily diverted from the hard-pressing issues like inflation, fuel price rise, cooking gas price rise, high unemployment and India’s continuous fall in the World Hunger Index ratings towards the Hindu-Muslim dichotomy.

Can this overused anti-Muslim violence template help the BJP and the RSS reap rich yield and dupe the majority of the people once again? Or can the people’s consciousness and the realisation hit back the BJP badly, at least in Tripura and West Bengal? The answers to these questions will be known in the future and will also define the future course of Indian politics.