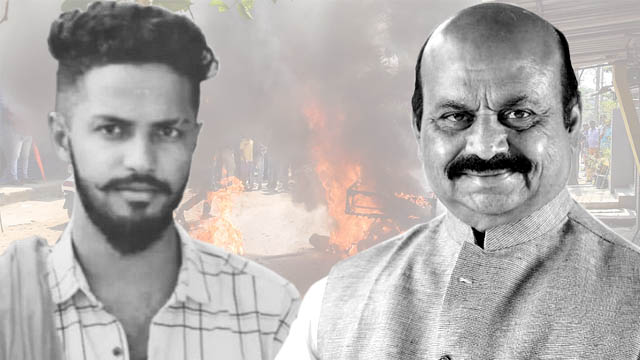 Sporadic incidents of communal violence in Shivamogga town of Karnataka have erupted after an activist of the rabid Hindutva fascist outfit Bajrang Dal was killed on the night of Sunday, February 20th 2022. The deceased is identified as Harsha Jingade aka Harsha ‘Hindu’ (26) who used to work as a tailor, apart from being a foot soldier of the outfit infamous for unleashing violence against religious minorities like Christians and Muslims.

Soon after Harsha’s killing was reported, a feral mob of saffron-clad hooligans started a violent rampage in the town. Alleged Bajrang Dal activists burned vehicles parked on the streets and pelted stones at houses, markets and pedestrians. The police had to fire tear gas shells to control the violent mob on Monday and Tuesday. The situation remain tensed in Shivamogga.

Minority Muslims are alleging that the ruling Bharatiya Janata Party’s (BJP) government is hand-in-glove with the rioters and the police aren’t helping the victims. While many are relating the ordeal of Shivamogga’s Muslims with the horrors of the 2020 Delhi pogrom, which started on February 23rd, many are relating the incidents with the Tripura anti-Muslim violence that took place in October 2021.

Even though the BJP government has deployed police in Shivamogga and declared holidays in schools and colleges, the situation didn’t normalise. While the police have arrested six Muslim men—Mohammad Kashif, Sayed Nadeem, Asifullah Khan, Rehan Sharif, Nihan and Abdul Afnan—on charges of stabbing Harsha outside Bharathi Colony on Sunday night, it’s alleged that these men have been arrested to appease the enraged Bajrang Dal and other Hindutva fanatic organisations.

Nadeem’s kin reportedly denied knowledge of his involvement in the crime. His mother Parveen Taj had told media that he was unwell on Sunday and didn’t even step out of the house. The police didn’t clarify on what basis these arrests were made and what are the incriminating evidence against these men.

The Hindutva fascist ecosystem led by the Rashtriya Swayamsevak Sangh (RSS)—the parental body of both Bajrang Dal and the BJP—continued to peddle fake news to demonise the Muslim community by linking the murder of Harsha with the ongoing hijab row. These fake news posts on social media and messages shared on WhatsApp, allegedly intensified the violence on Monday, February 21st, and Tuesday, February 22nd.

It’s alleged that Harsha was a part of the Hindutva fascist mob that hoisted the RSS’s saffron banner at a local college recently to oppose the Muslim women’s right to wear hijab in educational institutions. The police have dismissed any connection between the incident and Harsha’s murder on Sunday.

As a rabid Hindutva fascist, Harsha was accused in at least five cases of assaults, attempts to murder, rioting, etc, according to the police. It’s alleged that he had taken part in several incidents of violence against the Muslim community in the area. The police are looking for a link to his murder by using his criminal antecedents, though the BJP has whitewashed him as a “good man”, obfuscating his criminal records.

Earlier, Karnataka Home Minister Araga Jnanendra had informed that the issue wasn’t linked with the hijab row. “Hijab issue has nothing to do with this incident. It has happened for different reasons. Shivamogga is a sensitive city”, he told the media. Yet, that didn’t stop all his colleagues from issuing random statements to blaming the Opposition for the growing violence in Karnataka.

The news channel NDTV quoted Karnataka’s Rural Development Minister KS Eshwarappa accusing Muslims of killing Bajrang Dal activist Harsha. “Muslim goons murdered him. Recently, DK Shivakumar claimed that the national flag was replaced with the saffron flag, and around 50 lakh saffron shawls were ordered from a factory in Surat for the anti-hijab protest. Goondaism increased after he made these statements”, Eshwarappa said.

This statement shows how the ruling party is trying to officially stoke communal tension in the state, where the hijab row, which has been converted successfully into a Hindu-Muslim dichotomy, has soared the temperature and polarised the upper-caste Hindus and the backward class Hindus (OBC) against the minority community.

BJP’s hypocrisy in controlling the communal violence in Shivamogga

When a group of Muslim men resorted to rioting in Bengaluru in August 2020, the former BJP chief minister BS Yeddyurappa threatened them with dire consequences and gave the police a free hand to suppress the rampage over sacrilege of Islam by a legislator’s relative. However, no such “liberty” is granted to the police by current Chief Minister Basavaraj Bommai. Rather, the police have probably gone slow, along with several of the BJP’s rabble-rousers.

The BJP’s young rabble-rouser Tejaswi Surya, who had earlier urged former chief minister BS Yeddyurappa to penalise Muslim rioters who vandalised a locality of Bengaluru in 2021 and recover the costs of damaged public properties from the accused, remained mum on the vandalism done by the Bajrang Dal goons in Shivamogga. He didn’t appeal to current Chief Minister Basavaraj Bommai to act against the rioters and attach their properties to recover the costs of damaged public properties.

Maybe the Supreme Court barring Uttar Pradesh Chief Minister Yogi Adityanath’s order of attaching the properties of Muslims accused of participating in a rally against Prime Minister Narendra Modi’s contentious citizenship matrix, led to the change of heart for someone like Surya. Moreover, the potential political profit from the Bajrang Dal’s rioting in Shivamogga for the BJP is keeping Surya and his ilk of “strong action” advocates mum.

How the communal violence in Shivamogga will benefit the BJP?

Karnataka will, like Tripura where an anti-Muslim pogrom took place in October 2021, go to the polls in 2023. The BJP, which usurped power in the state by toppling Janata Dal (Secular) [JD(S)]-Congress party’s alliance government in 2019 by engineering a split using horse-trading of legislators, faces strong mass discontent in Karnataka. Hence, it’s repeatedly emphasising on communal of majority Hindus over all trivial issues to consolidate its vote bank.

At the same time, the Karnataka hijab row has helped the RSS in spreading Islamophobia and consolidating the susceptible Hindu minds, including those of ostracised Dalit communities. The BJP has successfully turned the issue into a Hindu-Muslim dichotomy as the Opposition fell into its trap.

Now, as the high-voltage canvassing for the Uttar Pradesh Assembly elections are on, where the lack of any meaningful achievement of Yogi-led incumbent BJP government has led the party and its campaigners, including the chief minister and the prime minister, to use communal jibes excessively to polarise the voters. In such a situation, the murder of Harsha in Karnataka and the resultant anti-Muslim communal violence in Shivamogga will help the BJP to consolidate its hysteric Islamophobic vote bank in Uttar Pradesh.

Moreover, Bommai became the chief minister replacing Yeddyurappa in 2021 due to a bitter feud within the BJP. Bommai has nothing in his kitty to prove his worth to the RSS leadership, which made him cling to communalism frantically. From enacting an anti-Christian law under the garb of banning religious conversion to the enforcement of hijab ban in schools, Bommai’s government has been focusing extensively on issues that can fuel communal discord, divide Kannada people and consolidate the BJP’s upper-caste vote bank while weaning away the OBCs and Dalits as well.

In this situation, Harsha’s murder and the anti-Muslim communal violence in Shivamogga have become a blessing in disguise for Bommai whose government will go to polls next year and will have to field many turncoat legislators from the JD(S) and the Congress who engineered the fall of the HD Kumaraswamy government in 2019. By stoking communal tension and allowing anti-Muslim violence to take place unabated in coastal Karnataka and other districts, the BJP will retain its hegemony on the “Hindu” vote bank and the Opposition will lose the opportunity to dislodge it from power.

The February pogroms, blessings for the BJP

Twenty years ago, a similar spring was marred with a gory bloodbath in Gujarat, where then chief minister Modi was accused of abetting communal violence against the minority Muslims following the killing of over 50 RSS workers and their family members in Godhra. Modi had been accused of allowing the Bajrang Dal and Vishwa Hindu Parishad (VHP) to exhibit the charred bodies of the Kar Sevaks—RSS activists who took part in the demolition of Babri Masjid in Ayodhya and strived to build the temple of Hindu deity Lord Rama at that place—to stoke communal sentiments and provoke the violent genocide that killed over 2,000 Muslims in a few days as per unofficial estimates.

Two years back, enraged with the Muslim women’s defiance against Modi’s contentious citizenship matrix, the RSS men launched a large-scale anti-Muslim pogrom in capital Delhi’s North-East district, killing over 36 Muslim men in four days between February 23rd and February 26th 2020. The Delhi anti-Muslim pogrom continued even when the former US president Donald Trump was in the capital city on a state visit.

Now, on the 20th anniversary of the Gujarat anti-Muslim pogrom that paved the way for Modi to ascend to power in Delhi, Bommai’s government is allowing a similar plot to unfold in Karnataka. The anti-Muslim communal violence in Shivamogga over Harsha’s death and the BJP’s unapologetic Islamophobic propaganda proves that the Gujarat model, which may not be in use in the electoral parlance of Modi’s BJP anymore, is very much practised by the party and other affiliates of the RSS even to date to ensure the people remain divided on religious lines.

Can the communal violence in Shivamogga, after the hijab row, help the BJP to consolidate its vote bank in Uttar Pradesh? Can the BJP reap rich dividends of such divisive politics in the 2023 Karnataka Assembly elections? Will the people of Karnataka fall once more in the communal trap and allow the BJP to get away with its failures? With time, the answers to these questions will be known; but what will remain unknown are the pain and sufferings of the Muslim community, which continues to face incessant all-around assaults from the present dispensation and finds itself gagged and repressed.