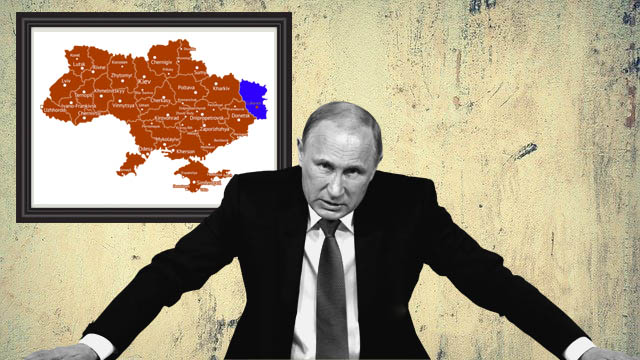 US President Joe Biden has announced unilateral sanctions against Russia for recognising these new people’s republics. The leaders of the UK, the European Union (EU) countries and other American allies, including Japan, have also supported the US in its imperialist ambition in Ukraine.

The western mainstream media, which feeds propaganda to a syndicate of news outlets globally, catering to billions, intensified its propaganda on the purported Russian invasion of Ukraine. Acting as a megaphone of the US government, the so-called “free media” universe is parroting the CIA’s script to hype the propaganda battle. Fake news is distributed in abundance by the top US news corporations to titillate their audience.

If one goes by the western media reports on the Ukraine crisis, it will appear as if a large-scale war has already started in Europe. Yet, the fact is that neither Russia has declared a war against Ukraine, a former Soviet republic, nor has it attacked any military or civilian facilities inside Ukrainian territories.

However, the neo-Nazi Ukrainian forces are reportedly attacking the civilians of the Donbass regions, which Russia is considering as a threat to its security. Russia is dismissing the allegations levelled by the US and the west while exhibiting its displeasure over the Ukrainian aggression.

So far, exhibiting extreme caution, Russian President Vladimir Putin has refrained from warmongering, unlike Biden and Ukrainian President Volodymyr Zelenskyy. Following Biden’s blueprint to stoke violence in the region, Kyiv-backed neo-Nazi forces are shelling the breakaway republics in the Donbass, targeting civilians to provoke Russia. Putin has emphasised the task to “demilitarise” and “de-Nazify” Ukraine, which is acting as an American pawn for years now.

After Russia signed a military pact with the people’s republics of Donetsk and Lugansk, which have sought Russian military support to retain their freedom from Ukrainian neo-Nazis, the US accused Moscow of starting an invasion against Ukraine. According to western narratives, the Russian-majority people’s republics are still “parts” of Ukraine and, in case, if the Russian military steps into these territories, it will be tantamount to military aggression.

Amid the tension, Putin has declared that the Russian forces will conduct strategic operations in Donbas to protect the Donetsk and Lugansk people’s republics. The Russian Parliament has authorised Putin to use military forces to stabilise the situation at the western front.

“Circumstances require us to take decisive and immediate action,” the order of the Russian government reads. This order, signed by Putin, emphasises the drastic need to neutralise the CIA-funded neo-Nazi forces of Ukraine that are trying to terrorise the people of the Donbass region.

“The People’s Republics of Donbass turned to Russia with a request for help. In this regard, in accordance with Article 51, part 7 of the UN Charter, with the sanction of the Federation Council and in pursuance of the friendship treaties ratified by the Federal Assembly and mutual assistance with the Donetsk and Lugansk People’s Republics, I have decided to conduct a special military operation,” Putin was quoted by Russia Today.

Since Russia took back Crimea from Ukraine in 2014, the Donbass area has been experiencing a military conflict between Russian rebels fighting for their right to self-determination, which Kyiv has been trying to forcefully suppress. Though Russia is accused by its opponents of arming and funding the rebels, its formal recognition of the people’s republics became a major setback for Ukraine.

However, as these people’s republics aren’t recognised by the US, the UK, the EU and other allies of the US like Australia and Japan, the entry of the Russian military in these regions, even as peacekeepers, will be shown as an act of ‘invasion’ against Ukraine. Such a move by Moscow will provide the western powers that control the North Atlantic Treaty Organisation (NATO) an excuse to tighten sanctions and arm Ukraine.

To resolve the Ukraine crisis, Russia has put forward its simple demands: Ukraine must renounce its bid to join NATO to ensure that the peace and stability of the region aren’t threatened; Ukraine recognises Russian sovereignty over Crimea.

Ukraine has so far refused these demands under US pressure. Instead of engaging itself in a meaningful dialogue with Russia, Zelenskyy has been pushing his country to the brink of a military conflict to appease the US and the western powers. He still insists on joining NATO and allowing Ukrainian territory to be used by the military bloc against Russia.

For Russia and its allies, NATO’s aggressive expansion into eastern European countries that were former members of the Soviet Union-led Warsaw Pact is a major security threat. Violating the September 2014 Minsk Agreement, NATO’s expansion into Ukraine will mean American nuclear missiles can be stationed there targeting key cities of Russia, including Moscow. Earlier neighbouring countries like Estonia, Latvia, Lithuania, Poland, Romania, etc, have joined NATO, posing a major security threat to Russia.

However, the western media’s propaganda on Ukraine obfuscates the core concerns of Russia and how it faces a severe security threat from the US, which has been notorious as a warmongering state that has remained in a state of war with one country or another throughout the last 245 years of its existence.

With the collapse of the former Soviet Union, an incident that Putin called the greatest “catastrophe of the 20th century”, the US and its allies got a golden opportunity to build military bases against Russia in its backyard. For this reason, the US and its allies have ensured that the tension between Russia and several of the former Soviet republics continue to simmer for decades.

To ensure that the Ukraine crisis is resolved peacefully, Kyiv must undergo a political change as the neo-Nazi forces who rose to prominence following the CIA-funded Maidan Revolution of 2014, survive on xenophobia and jingoism. They can’t do away with their tryst with violence against ethnic Russians as well as their quest for hegemony under the aegis of the US.

Until Russia intervenes in uprooting the white-supremacist neo-Nazi forces from Ukraine, leaving behind its inhibitions, it can’t secure its periphery, as these forces will continue to threaten Russia’s peace and security. With all major world powers ganging up against Russia, Putin has no option but to use force judiciously to neutralise the threat posed by neo-Nazis and help Donetsk and Lugansk retain their independence, which will provide a security buffer to Russia in the long run.

Moreover, for the resolution of the Ukraine crisis and long-term peace and stability in the region, the US-led western imperialist bloc must also step out of the picture and restrain NATO’s expedition spree to eastern Europe and the Balkans violating the Minsk Agreement. The west must stop its warmongering to allow peace to prosper in the region. It’s yet to be seen how or whether Russia can neutralise the western powers and disrupt their imperialistic agenda in Ukraine.