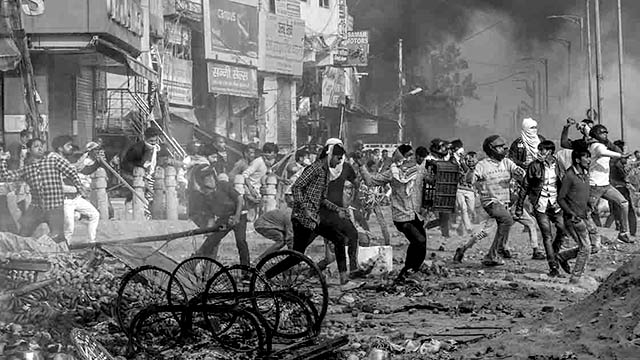 Violence even took place on Saturday, April 16th 2022, when a Hindutva mob attacked fasting Muslims in the Jahangirpuri area of the capital New Delhi. In most cases, affiliates of the Rashtriya Swayamsevak Sangh (RSS)—the global vanguard of Hindutva fascism—have been found complicit in the crimes against the minority Muslims.

In most states, the RSS-led Hindutva thugs took out armed rallies during Ram Navami and went through Muslim localities raising anti-Muslim slogans. They brandished weapons to bully the Muslims and even resorted to large-scale violence and arson in Gujarat and Madhya Pradesh. Earlier there was similar rioting in Rajasthan.

Hindutva fascist mobs burned down the Muslim shops and houses in Gujarat, Madhya Pradesh and Rajasthan. The Hindutva fascist mob also vandalised Muslim places of worship. Rather than providing security to the vulnerable Muslim minority, the police launched a large-scale attack on the community, accusing it of fuelling riots.

The Hindutva thugs, who instigated violence, remain scot-free. The police atrocities against the Muslims and their patronage of the Hindutva fascist mob emboldened the spirits of the latter.

In this spike of anti-Muslim violence in India, Prime Minister Narendra Modi’s Bharatiya Janata Party (BJP)—the RSS’s parliamentary wing—has reaped maximum benefits. It has ensured that the anti-incumbency waves in the states it rules can be kept at bay while trapping the people’s minds in the puddle of religious jingoism and Islamophobia.

The BJP recently managed to sweep the Uttarakhand and Uttar Pradesh Assembly elections, apart from Goa and Manipur, despite a rise in people’s discontent over the misrule of the party and the worsening economic condition. This victory was possible due to incessant communal polarisation and hatemongering by all BJP and RSS leaders through their omnichannel outreach programmes.

While India’s Muslims are trapped in a realm of fear and insecurity due to the virulence with which the state-sponsored Hindutva fascists are intimidating them, the opposition remains tight-lipped about the ordeal suffered by the community. The opposition is keen to retain the “Hindu vote bank”, a majority of which is incensed by Hindutva fascism. Thus, at times, the opposition isn’t shy to be complicit in the crimes against the Muslim community.

While liberal political commentators and Islamists have taken upon themselves the task of wailing over the spike in anti-Muslim violence throughout India, it’s imperative to analyse facts and see what’s triggering this new spate of hatred and violence.

Six states—Chhattisgarh, Gujarat, Karnataka, Madhya Pradesh, Rajasthan and Tripura— that experienced a recent surge in anti-Muslim violence will go to assembly polls either in 2022 or 2023. Among these states, only Chhattisgarh and Rajasthan are ruled by the Congress party; the rest are all governed by the BJP. Even in the Congress-ruled states, the BJP is the most formidable foe.

After the BJP managed to sweep the Uttarakhand and Uttar Pradesh Assembly elections by using Islamophobic propaganda to quell anti-incumbency sentiments caused by lack of employment, inflation and worsening law and order situation, the party has gained immense confidence.

India’s economy has been in a quagmire of severe crisis since 2017-18, following Modi’s disastrous demonetisation drive. Over the years, the economic crisis has grown manifold. The unorganised sector suffered the worst, which employs over 90% of India’s workers. Real income has fallen, and unemployment has spiked amid a northbound inflation graph.

Recently, the State Bank of India has estimated that retail inflation, which crossed 6.95% in March 2022, will remain around 7% till September 2022. Approximately 80% of the jump in the March 2022 prices was attributable to the food segment.

There is no word on where the excessive cess went, which was collected by the Modi regime from 2014 onwards. The Modi regime neither cuts the taxes imposed on oil nor provides any subsidy benefits to the common people. This high fuel price will severely impact agriculture, transport and trade. It can further shoot up inflation.

As per the Centre for Monitoring Indian Economy’s (CMIE) data, the average unemployment rate for the financial year 2021-22 was 8%, which is quite high. It’s evident that quite soon, the rising fuel prices and falling real income amid spiralling food inflation can stir major troubles for the BJP. This is what the party wants to avert.

In a 2014 Yale University study, it was found that the BJP gains 0.8% votes after each communal clash. However, this study considered the facts of the pre-Modi years in Indian polity. With the rise of Modi, the RSS managed to establish its hegemony over the Indian state machinery formally and turned Islamophobia into a national doctrine of India.

Apart from this, the nexus of Modi, Mukesh Ambani of Reliance Industries and Mark Zuckerberg of Meta (formerly Facebook) helped expand the reach of smartphones and mobile internet since 2016. The RSS expanded its digital outreach, targeting millions of working-class, as smartphones became ubiquitous.

With sustained violence against Muslims, their socio-economic exclusion and persecution, the RSS is trying to thrill the upper-caste Hindu lobby and enthral the vulnerable backward class (OBC) Hindus and the ostracised Dalits. The hysteric Hindutva jingoism uses the subjugation of Muslims as a symbol of the Hindu religion’s triumph.

Thanks to the vitriolic propaganda that the people are consuming through WhatsApp and social media, the subjugation of Muslims is normalised and has become a source of entertainment for many.

Video recordings of mob lynching of Muslims or attacks on Muslim places of worship are consumed with pride by many brainwashed and radicalised Dalits and OBCs, who overlook their humiliating status in the Brahminical hierarchical order, which the RSS wants to formally establish now under the guise of “Hindu Rashtra”.

The optics of Muslim humiliation will help the BJP conceal the disaster through which the Indian economy has been passing. It will also divert the people’s focus, especially the youngsters’ attention, from the perennial issues of unemployment and inflation.

Though the BJP won the 2017 Gujarat elections, it’s not in a very confident position due to the rising anti-incumbency waves in the state that the party, including Modi, ruled for around 25 years. The recent anti-Muslim violence in the Himmat Nagar area of Sabarkantha district may help the BJP in communal polarisation before the assembly elections later this year.

During the 2018 polls, the BJP lost Karnataka and Madhya Pradesh, along with Chhattisgarh and Rajasthan. However, by mid-2019, the BJP managed to topple the Janata Dal (Secular)-Congress party’s coalition government in Karnataka by buying many legislators from these parties.

In 2020, Madhav Rao Scindia, the BJP’s trojan horse within the Congress party, helped organise a coup in Madhya Pradesh and the BJP managed to usurp power. Scindia has become a Union minister.

In Chhattisgarh and Rajasthan, though the Congress party managed to retain power, the picture isn’t rosy at all. The factional feud within the Rajasthan Congress made Sachin Pilot rebel against Chief Minister Ashok Gehlot. However, the latter managed to suppress the rebellion and retain Pilot and his loyalists.

In Chhattisgarh, Chief Minister Bhupesh Baghel faces a constant threat from his colleague, state Health Minister TS Singh Deo. The factional feud turned ugly in 2021, and Deo approached the headquarters (High Command) for the baton of power, which New Delhi has been denying. The Chhattisgarh government is frantically trying to prove that it’s more inclined to Hindutva fascism vis-à-vis the BJP.

As the BJP gears up for the assembly elections in Chhattisgarh, Gujarat, Karnataka, Madhya Pradesh, Rajasthan and Tripura, it’s evident that more trouble is yet to come and haunt the Muslim community in these states. The BJP knows that it will get more votes if it can spill more Muslim blood.

One must remember that during the 2017 assembly elections in Gujarat, one Hindutva fanatic had hacked to death and then burned a Muslim labourer named Afrazul Sheikh in Rajasthan. The culprit isn’t convicted yet. The incident helped the BJP gain more votes in Gujarat.

The 2023 assembly elections will also show how much support the BJP enjoys in these provinces. Though the opposition may throw a strong challenge against the BJP in Karnataka, Madhya Pradesh and Tripura, their chances of making a kill are bleak now. However, the results of these elections will show how the BJP’s communal agenda has paid rich dividends to the Hindutva camp.

Modi’s second term has been marred with more controversies than his first innings. The economic crisis has grown manifold, and people’s livelihoods have been affected. Amid this, Modi and the BJP are confident of winning 2024 as they know how to use anti-Muslim violence and jingoism to polarise the majority of Hindus. However, on the other end, there is no strong opposition to the BJP, and there is no party that has either the capability or the credentials to fight Hindutva fascism.

Rather than combatting the RSS-led Hindutva fascist menace, rather than suppressing the Hindutva fascist thugs who intimidate and attack the Muslims, the Congress-led governments in Chhattisgarh and Rajasthan, and the Trinamool Congress (TMC) regime in West Bengal have been acting as RSS pawns. They are empowering the perpetrators of anti-Muslim violence in these states.

What’s the way out of anti-Muslim violence?

The anti-Muslim violence in India won’t stop spontaneously. It’s a well-planned political strategy of the RSS-led Hindutva universe, and these incidents will pay rich dividends to the BJP. The RSS has total control over the administration, which will impede any attempt by the vulnerable Muslims from seeking justice from the system.

Due to this, the only way to resolve the rise in anti-Muslim violence in India is to build an alternative movement based on people’s resentment against the economic crisis, especially against inflation, unemployment and wealth inequality. An alternative political formation is required to do this. A formation that wouldn’t subscribe to the neo-liberal economic policies practised by the BJP and the Congress alike.

The farmers’ movement against Modi’s contentious agricultural laws showed a way out. Recently, the working class organised a two-day-long nationwide strike against the Modi regime’s policies, which caused ignominy to the BJP.

If a new political movement is formed to advance the causes of the working class and the farmers, to protect the rights of the minorities and the marginalised people, and if it can resolutely fight against the RSS’s fascist brigade, then the situation can undergo a drastic change. Then the anti-Muslim violence by the Hindutva thugs can be put to an end. Else, the ordeal will continue for the Indian people.