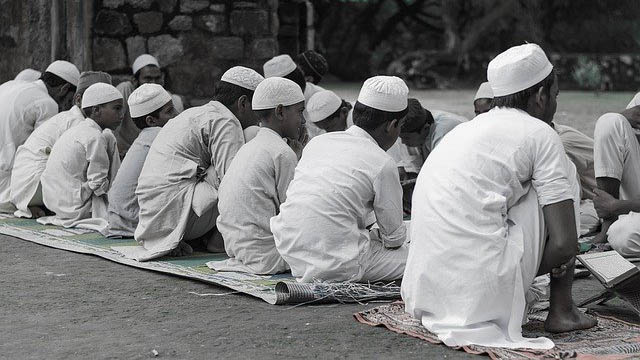 The subjection of India’s Muslim population to a continuous communal onslaught is weakening their psychic strength. Shadman Ali Khan notes: “With each passing day, Indian Muslims are becoming increasingly disconnected from their surroundings, disengaged from themselves, and disturbed by the daily horrors of their life. Yet, they are unable to fathom how to save themselves from the carnage in the long term.” This incapacitation of political will demands new ways of thinking that can help constitute a revolutionary subjectivity defined not by passive defeatism but by optimism. However, this process of re-politicisation has encountered many difficulties regarding the identity question. Many Liberals have suggested that Muslims should lower the tone of their religious identity to shed their supposedly narrow mindset and appeal to everyone. Behind this appeal lies a concern to soothe the anxieties of the Hindu majority. To not trigger the majority community, Muslims are advised to shun any open display of religion and instead emphasise common grievances.

Perceiving the assertion of Muslim identity as a provocation that arouses Hindu resentment, Liberals argue that Muslims should evoke pluralism and diversity in content-empty terms so that no real disturbance is created in the architecture of moral superiority constructed by the Hindu Right. To bypass the need for the open subversion of Hindu-centric civil society, Liberals ask Muslims to pursue a better emotional identification with the majority community so that violence against the former can be replaced with a social compact whose modest aim is to guarantee conditions of minimal stability to Muslims. This approach is like the one used by Martin Luther King Jr. to build the American civil rights movement. To bring attention to rampant racism against the Blacks, King appealed to the American Constitution and Christian values. Through a sustained focus on non-violence, integrity and civility, he tried to motivate Whites to adopt the normative perspective of equality and give up racist attitudes.

King’s appeal to the morality of white people was fundamentally problematic. “[I]n terms of the Other as Master,” writes Chioke A. M I’Anson, “this appeal is doomed to fail.” “Instead of trying to realise your free self, you are begging your oppressor to free you, to allow you to have a self. If the oppressor allows it, your existence is still defined by the oppressor.” The dialectic of recognition operates in such a way that both subjects must be actively involved; recognition can’t be bestowed on the subordinate self-consciousness by the dominant self-consciousness. If such a one-way transferal of recognition is enacted, the hierarchical relationships between the subjects are only reinforced. Recognition remains in the master’s control, who does not allow enslaved people to enter the room of mutuality and be recognised on their terms. The slave’s situation becomes a bit like “a sinner in the hands of an angry God. God is merciful so far, but he could get tired of you and let you slip through his hands into hell at his whim.” Without the slaves actively striving for and demanding recognition from masters, recognition can never be truly mutual. It will invariably consolidate the structural base of dehumanisation by tilting recognitive dynamics in the masters’ favour. As Heather Stewart remarks:

As is evident, King’s appeals to the oppressor’s conscience did not consider the fact that racism had pushed Blacks into the zone of non-being, positing them as always-already marked as less-than-being. The racist would regard the injustices inflicted on Black people as unjustifiable only to the degree that he regarded the Black individual as equally human. “The presupposition of King’s theory, the acceptance of my cohumanity,” comments William R. Jones, “is simply not present in a racist society. King puts the cart before the horse, for where racism is present the belief that black suffering is undeserved is absent.” In other words, the slave’s existence is an expression of the objective reality of the power of the master. The master is recognised, and the slave lives in a state of non-recognition. Hence, oppressed people first need to overcome ontological denial and, in so doing, forge the basis for a positive political grouping. The slave achieves this transcendence of their othering by vehemently rejecting it through what George Ciccariello-Maher—in his book “Decolonising Dialectics”—calls “combative self-assertion” that enables the slave to reject “her self-alienation,” to “turn away from the master” and to force the master to “turn toward the slave”. The slave’s action re-starts dialectical motion and forces the master and the slave to contend as ontologically equal adversaries.

Malcolm X acknowledged the sub-ontological realm to which the racialised were condemned and thus, gestured toward the pre-dialectical and counter-ontological activity that was required for kick-starting dialectical opposition. This activity was to be constituted by the assertion of black identity as a form of counter-discourse oriented toward creating a concrete universal. Unlike the abstract universality of modern liberalism, with its human and civil rights that ignore socio-cultural antagonism, concrete universality is rooted in social life yet points beyond the sheer facticity of a complex reality. This dialectical feature of concrete universality allows it to mould identity in a radical direction. The identitarian experience provides a point of entry to potentially radical politics. Still, such potential will only be realised if its subjects move beyond that unfiltered immediacy to challenge the systems of oppression that generate the inequalities shaping not only their lives but also those of others. Malcolm X was attentive to this dialectic: “against a black nation which was totally separate from white America…[he] posed black power as an antagonistic movement whose objective was to transform the country as a whole rather than to control a small corner of it.” Maher writes:

“Rather than an absolute separatism in which black unity was premised upon biological or cultural superiority and opposition to equally biologically-determined “white devils,” Malcolm X transposed his opposition to the social and historical-structural plane, arguing that this ideal of black self-determination was only possible “if the total society is changed.””

However, the normative ideal of “black-white unity” was dependent on the dynamics of Black resistance against the structural and ideological supremacy of White rule. Without the preceding struggle against social disparities, calls for political unity threaten “to hypostasize the present and thereby make existing inequalities permanent.” In Malcolm X’s perspective, “It is only on the basis of a struggle for black identity and economic development…that the foundations for eventual re-unification with white society can be laid. Unity—in this case, national—is displaced into the distant future and contingent upon the progress of political struggle.” Therefore, Black identity is “embroiled in a war on two fronts: against discourses of unity, and against the purported opponents of such discourses (in the case of Malcolm, against the discourse of national unity on the one hand, and against the separatist discourse of the Nation of Islam on the other).” Like this, Muslim identity in India has to be designed as a discourse of concrete identity against abstract unity, but one which refuses to reproduce reified unity on the level of identity. In other words, it must be a practical process of building and asserting Muslim identity, not as a process directed toward parochial ghettoisation but as a first and necessary step toward human reconciliation on equal terms.

So, contrary to Liberals, the fight against communalism in India needs to involve Muslims’ cultural assertion as it is the only political antidote to the dehumanisation inherent in every exclusionary ideology. To realise their self-consciousness as humans, Muslims need to practice the politics of self-respect. “People do not take the powerless seriously,” writes Bernard R Boxill. “Because he wants to know himself as self-respecting, the powerless but self-respecting person is driven to make others take him seriously.” And this unequivocal expression of self-respect can be actualised only through emphatic protests on the part of the powerless subject. “He will protest. His protest affirms that he has rights. More important, it tells everyone that he believes he has rights and that he therefore claims self-respect.” To conclude, Muslim dignity is an embodied praxis – an intersecting network of processes by which we represent, identify, preserve, and nourish the core aspects of what makes us human. As such, its renewal requires robustly grounded and socially effective mobilisation practices against communalism.