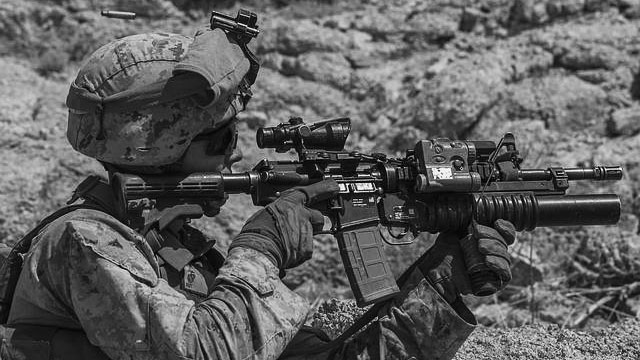 Before 18-year-old Salvador Rolando Ramos drove to Robb Elementary School, Uvalde, Texas, with his recently-purchased AR-15 rifle on May 25th 2022, the parents of 19 children and family members of the two adults, who were massacred by him, believed that they lived in the world’s most-secure country. Indeed, those 19 children didn’t know that the federal government of Joe Biden and Kamala Harris had proposed an $813bn-worth defence budget to the US Congress on March 28th 2022 for the 2023 financial year (FY). Out of this, $773bn is earmarked for the US Department of Defense (DoD) to secure the country.

Ramos went on a killing spree and was killed in gunfire when the police, after showing initial reluctance to save children’s lives, broke into the school with the support of US Border Patrol agents. It’s reported that Ramos, who bought the gun recently after turning 18, shot his grandmother before heading to the school. After Ramos brutally massacred the children, the quintessential cacophony over “gun control regulations” restarted in America. This wailing starts as a ritual soon after a mass shooting, which also recurs like popular festivals in the US, and the liberals always blame the conservatives for the bloodbath.

The Democrats, including President Biden and Vice President Harris, trained their guns on the Republicans who always block the “gun control regulations” that the US’s liberal camp tries to implement to prevent such crimes. The American mainstream media, apart from hosting debates over “gun control regulations” also lambasted the Republicans and their association with the National Rifle Association (NRA). The Democrats, especially its highly sophisticated liberal rabble-rousers resorted to their verbal diarrhoea against the NRA and the Republicans, who are accused of taking money from the association. The NRA, a conservative lobby, strongly opposes any sort of tighter gun control.

The Uvalde massacre by Ramos wasn’t the first or the last one in the US’s blood-stained history. The Americans have been experiencing macabre atrocities against humanity since the white men colonised the land that once belonged to the indigenous ‘Red Indians’. Terror attacks on schools—though the perpetrators aren’t called ‘terrorists’ unless they are Muslims—have been rampant in the US. The Associated Press, along with the USA Today and North Eastern University, prepared a list of school shootings in the US, starting from the 1999 Columbine School. A total of 169 students have been killed in all these years.

Ironically, while Biden paid tribute to the massacred children in Texas, a Republican stronghold, his predecessor Donald Trump addressed the NRA and supported the right to carry guns. Amid this hullaballoo over ‘gun control’, a 45-year-old man, carrying a similar AR-15 rifle, went to St Francis Hospital in Tulsa, Oklahoma, on Wednesday, June 1st, and shot patients and doctors to avenge a post-surgery pain. Earlier, on May 14th, an 18-year-old white supremacist terrorist named Payton Gendron killed ten black people at Tops Friendly Market, Buffalo, New York. Gendron also used an AR rifle and live-streamed the macabre incident on Twitch.

While the Democrats continue to slam Trump and the Republicans for the growing ‘hate crimes’ and ‘shootouts’ (note, no use of the term ‘terrorism’), their demand for ‘gun control’ is not just problematic, but also absurd. The US is founded on the principles of private property ownership and individualism. These two provisions allow the US citizens to freely arm themselves, as a gun is also a privately-owned property which can be legally owned by an adult who can pay for it, like a car or a house buyer. No law can stop an American citizen from legally owning private property!

In such circumstances, one must investigate the other aspect of the problem. The gun is merely a weapon. Who owns it also decides who uses it and against whom it is used. A gun owned by a bandit will be used for a different purpose than a gun owned by a soldier or a rebel. What kills children and adults, during such terror attacks as the one that took place in Texas’s Uvalde, is the killer. A human being devoid of humanity. But what turns them into feral beasts? Why do they storm schools or hospitals and kill innocent people?

The answer lies in the US’s dark chamber of secrets. The inherent characteristics of individualistic capitalism, which drives, on one hand, a large section of the middle-class each year towards sheer poverty, and, on the other hand, pushes people into severe mental health crises due to their social isolation and contradictions, is responsible for more violence in the American society. While the US was founded on the principle of violence against indigenous people, the metamorphosis of the capitalist greed and hatred has turned the spearhead of violence towards the American society itself and made its vulnerable sections, including children, unsafe.

While the US politicians and civil rights activists are declaring their crusade against guns, they aren’t speaking against the mighty “military-industrial complex”, as former president Dwight Eisenhower had labelled the evil nexus between the American weapon industry and its Department of Defense. Data published by China’s Global Times newspaper shows that five out of the world’s ten big military contractors come from the US. The stocks of these five contractors have outperformed the stock market by 58% from 2001 to 2021. Out of the total $2.31 trillion spent on Afghanistan War, $2.02 trillion, or 87%, went to these five contractors.

In a country where the defence contractors and the military command have so much murkier deals that the Pentagon can’t even pass one clean audit since its establishment, and where the call to disband the military-industrial complex has been rising from within the establishment, how can guns stop flooding the domestic market, where it has a huge demand? Capitalism works on the policy of demand and supply. As long as demand for guns exists in the US domestic market, there will be guns for the buyers. To stop this availability, the American constitution needs an amendment curtailing an individual’s rights.

Under the pretext of “protecting American lives”, the Pentagon has set up over 750 military bases in 80 countries around the world. It is foraying in South and Southeast Asian waters to combat China with the help of regional satraps and lackeys to protect “American lives”. The US is meddling in Russia’s affairs, arming Ukraine’s neo-Nazis to the teeth while expanding the North Atlantic Treaty Organization (NATO). At the same time, the US has been deploying nuclear-powered submarines, building a huge cache of killer drones, which often kill civilians in combat zones, thousands of miles away from the US’s soil.

The US recently provided Ukraine with $700m-worth of military aid to fight Russia, so that “American lives” can be protected. The US has also promised a total military aid of $38bn to Zionist occupiers of Palestine from 2017 to 2028. As a part of it, the US had provided $3.8bn to the Zionists in 2020. For each Palestinian child killed by Zionist terrorists, the American taxpayers’ money is used. The US has been also arming the brutal Saudi Arabian monarchy. Since a $110bn-worth treaty in May 2017 to modernise the Saudi Army, Washington has spent over $27bn until January 2021.

All this money in military aid, along with an $813bn-worth defence budget, should have secured the precious “American lives” by now. However, unfortunately, it didn’t. Rather than foreign enemies, including “Islamist” terrorists from the Middle East or Pakistan, it’s America’s own — enraged youngsters and depressed boomers — who are causing mayhem in the US territory. The children, who can neither understand politics nor the complex issues of capitalism, are falling prey to incessant spraying of bullets by “mentally deranged” killers who are never called “terrorists”. The US has military bases to bomb foreign countries but no means to protect its children.

While the US spent $635bn on its global military expeditions to apparently “secure American lives” in 2021, it had spent $586.4bn on education, a mere 3.1% of its national GDP. The US allocated only $2.14bn to the National Institute for Mental Health (NIMH) for its population’s mental welfare. Although this mental health spending may look quite lucrative for those in the global south, in reality, its scope doesn’t include a vigorous counselling and support system for those falling prey to capitalism-induced abject depression, leading to mass shootings, racial violence and violence against women and children, and targeting other vulnerable American population.

In this situation, it’s quite apt for the Americans to ask their government why it can’t protect them with its mighty military establishment? Why the “American lives” are under threat from Americans themselves? Why American children can’t be protected despite over 750 military bases exhibiting the US’s military prowess to the people of the world? Why can’t the US afford, despite having such a huge defence budget, to secure the perimeter of its schools with at least men and women armed with Glock pistols to prevent terrorists with AR-15? These questions are more necessary than liberal wailing over ‘gun control’.

As long as capitalism will thrive in the US, amassing immense wealth as super-profits by exploiting the global south’s labour and resources, the American society won’t have any respite from the vicious cycle of violence. The Americans must note that the Chinese and North Koreans, whom they are taught to despise, have never experienced such massacres. People like Ramos will reappear with guns—their private properties—and vent out frustration by shooting whoever they would consider their enemies, like the children in Uvalde’s school. Hollow phrases, that mask capitalism’s role behind the violence, will never help in stopping this mayhem.