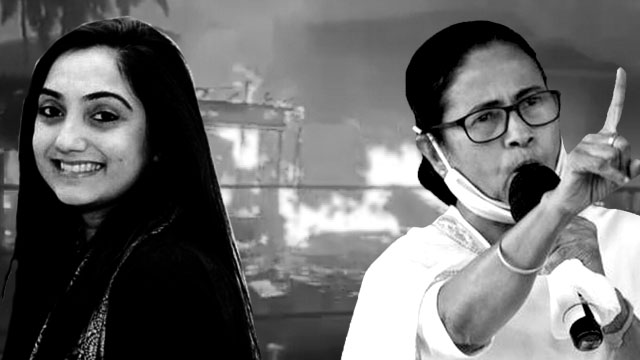 In this scenario, when our team investigated the matter on Tuesday, June 14th and reached Howrah’s troubled zones amid the curfew, we found what contradicts the narrative on communal violence in Howrah peddled by the mainstream media. When we arrived at Dhulagarh, after crossing Ankurhati, we found Farid (called ‘Chacha’ or uncle) was sitting in an eatery selling parathas, along with Sumon. Opposite them, on the other side, a traffic guard post stood with its shattered glasses as a witness to what had happened on Saturday, June 11th. Were these a part of communal violence in Howrah, as reported?

Both Farid and Sumon denied it. “This happened after the police and the RAF attacked the protesters and baton-charged them,” Farid said. “This didn’t happen due to any communal issue; the people exhibited their anger against the police atrocities,” Sumon clarified. Both narrated that after Friday’s protest, nearly 1,500 to 2,000 people assembled to protest Sharma’s comment and demand her arrest on Saturday as well. “Several Hindu youths also took part in these rallies to support the demand,” Sumon informed. They were all enraged when the police attacked them without provocation and unleashed unilateral violence against them.

What did Dhulagarh say about communal violence in Howrah?

After reaching Dhulagarh Market, we found the toll tax gate, with shattered windows and scattered glasses all over the place, still bearing testimony of what took place on June 11th. Here we met van-rickshaw-pullers, who ferry people and goods to nearby villages. Here we met Sanat and Salim. They informed us that the rally, which started at 11am and ended by 6pm, wasn’t communal at all. It “demanded Sharma’s arrest for her derogatory comments against the Prophet and also to protest against growing Islamophobia in the country”, Salim informed.

According to Sanat, some men apprehended Salim’s relative Khokan at the Shibtala Market and thrashed him. They forced him to utter Hindutva fascist slogan “Jay Shri Ram”. Khokan, who has suffered a fracture on his left arm and a head injury, is now getting treated at a local hospital. This happened on the morning of Saturday before the rally started. Though the situation remained peaceful even after the incident, there was simmering anger against the police for not arresting the accused. Amid this situation, there was pandemonium when the police started attacking the protesters without provocation.

At Shibtala Bazar, the epicentre of Saturday’s violence

On the opposite side of Dhulagarh Market, after reaching a few steps towards the left, there is a lane on the right side leading to the Shibtala Bazar. Few people could be spotted at Shibtala Bazar due to the heavy deployment of police and RAF. The auto-rickshaw stand was empty; those who could be spotted refused to say anything. A few police SUVs whizzed while men in uniform guarded the place. No public vehicles or pedestrians were spotted at Shibtala Bazar. People alleged that the police arrested nearly 150 people, most of whom are students and daily wage-earners.

After crossing a lane near Shibtala Bazar, we found a shopkeeper selling powdered Bengal gram (Sattu). A migrant from Bihar, the shopkeeper didn’t want to be named. A Hindu temple stood behind his store. Showing it, he said in broken Bengali that since Khokan was thrashed in the market on Saturday, the people of the area, both Hindus and Muslims, formed a human chain to guard the temple and ensure it wasn’t attacked by anyone to incite communal tension. The shopkeeper expressed grief, “Hindus and Muslims have lived in the locality peacefully for decades, and nothing like this ever happened.”

He said the situation worsened after Khokan, considered a good man, was thrashed without provocation in the Shibtala Bazar area. The people, irrespective of religion, were quite scared as they thought a communal riot could be provoked by those who would want to capitalise on Khokan’s thrashing by Hindutva fascists in the market. This made them, especially Muslims of the area, cordon off the temple to save it from any untoward incident. The shopkeeper said he is happy that at least no community fell into the trap laid for them by the unscrupulous elements and unitedly faced the situation.

It’s reported that Muslims formed a similar human chain in Ankurhati to cordon off another renowned temple of the region. The video of the Muslims guarding a Hindu temple went viral on social media. We returned to Dhulagarh to take a tempo to Ranihati and from there to Panchla. There was a scuffle among the tempo drivers over whose turn it was to take passengers on shared rides. The fact that their tempos didn’t ferry passengers for three days was the main reason behind the scuffle. An old lady walked to them and pleaded to stop the brawl.

“Please don’t fight anymore. Don’t you see what’s happening around us?”, the woman pleaded. The toiling masses of the region, the working class, showed they neither endorsed any communal violence in Howrah nor wanted any form of communal politics to worsen the situation. A young man named Sukumar was riding with us. There was also a Hindu woman, wearing vermillion on her forehead, who didn’t want to be named. “Didn’t you see that around 58 countries gave a call to boycott India for this? Didn’t you see they made vile remarks against Islam’s holy figure?”, Sukumar asked.

The woman in the tempo, who identified herself as a fruit seller of the Ranihati Bazar, also expressed her anguish. “(The government) they are all up to killing us, the poor people,” she said. While she shared her experiences as a fruit seller and how inflation has been increasing her hardships, we reached Ranihati. After taking another tempo ride towards Panchla, we could see police and RAF deployed at each nook and corner. From Panchla, while walking towards Kalitala, no pedestrians could be found on the streets due to the curfew order. At Kalitala we didn’t see many policemen though.

It became evident that the Hindutva fascist organisation named Hindu Sanhati, which is notorious for abducting Bengali Hindu women who do inter-religious marriages, has a strong presence in Kalitala. Its banners were hoisted everywhere, along with those of the BJP. Though the late Tapan Ghosh, an infamous rabble-rouser and Zionist Israeli agent, founded the Hindu Sanhati in the late 2000s after he quit the Rashtriya Swayamsevak Sangh (RSS), the parent body of the BJP and the global fountainhead of Hindutva fascism, the organisation still cooperates with all other saffron terror organisations. Its ubiquitous presence in Kalitala rang an eerie alarm.

When we reached Mansatala, where shops were vandalised on June 11th, and some were burned down on June 12th, we found a few cigarette sellers had opened their small stalls, but the market inside still exhibits the bruises. The shops appear ransacked. Sanjay, an auto-rickshaw driver, said the area was burned down by hooligans—whom he refused to identify—on June 12th. According to him, stones were pelted at the shops and houses of both Hindus and Muslims. Cloth merchant Mahidul and flower vendor Hiru, whose friendship’s story has been highlighted by media outlets, are also from Mansatala.

On our way to Uluberia Municipal Corporation, we stopped at the Uluberia ESI. There was a massive police and RAF deployment in the area. Whenever a crowd of three would cross the street, the policemen would threaten them by raising their batons. While most shopkeepers have kept their shutters down, a few pan shop owners had their shops open. They informed us that nothing untoward happened in this area but near National Highway 6 (NH-6). The BJP’s men also burned tyres on NH-6 and organised protests when their party office was burned down by those protesting Sharma’s remarks.

The shopkeepers and the local people declined to share any information. However, they vehemently denied that there was communal violence in Howrah. According to one of them, the BJP has spread the lie regarding a communal clash after it suffered the brunt of the people’s protests. Though no offices of West Bengal’s ruling Trinamool Congress (TMC) were vandalised, the burning of the BJP’s office has unleashed political bickering between the two organisations that show allegiance towards the RSS – the BJP officially and the TMC in a clandestine manner. The people’s indication was clearly towards the BJP regarding the rioting.

What did we learn from the communal violence in Howrah?

The facts didn’t corroborate any “communal violence in Howrah”, as the media alleged, which means neither the Hindus nor the Muslims clashed on June 11th or June 12th, nor did the Muslims organise any state-sponsored pogrom against the Hindus. As per Census 2011, Hindus are 53% of Panchla’s and 58% of Uluberia’s population. There are 47% Muslims in Panchla and 42% in Uluberia. Even after the considerable size of the minority community, there was no communal violence in Howrah. Instead, the people’s testimonials say that the violence occurred after the police attacked the protesters without provocation that day.

Instead of exposing the truth, Chief Minister Mamata Bandopadhyay endorsed the RSS-affiliated media outlets’ malicious propaganda over communal violence in Howrah. Bandopadhyay expressed her dismay regarding the people caught in the road blockade and blamed the BJP for instigating the “communal violence in Howrah”. Bandopadhyay’s attitude, her choice of words and victim-blaming not only infuriated the protesters and the people of Howrah, but it has immensely benefitted the BJP and the RSS in instigating the majority community all over the state using fake news. Rather than addressing the issue of police violence against the Muslims, Bandopadhyay’s government persecuted the Muslims.

When inflation is skyrocketing, and it’s becoming harder for the common people to manage their daily expenses, the narrative of communal violence in Howrah only aided the ruling section in polarising the masses. The BJP didn’t miss the chance to spew communal violence, but the TMC didn’t stop it either. Before the Panchayat polls in 2023, the TMC and the BJP are attempting to polarise the rural voters mutually. Through such communal polarisation, the TMC and the BJP want to push burning issues like severe unemployment and skyrocketing inflation to oblivion to avert electoral humiliation, a dangerous trend.