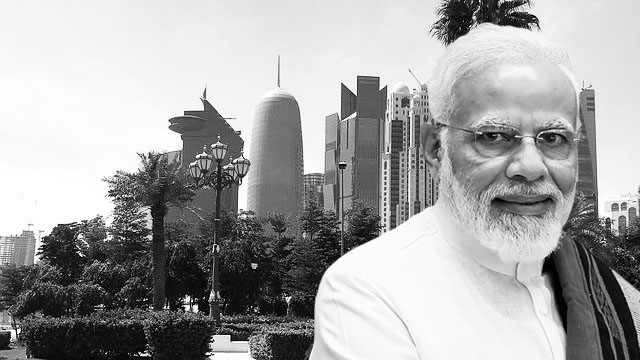 As countries like Afghanistan, Bahrain, Indonesia, Iran, Jordan, Kuwait, Maldives, Oman, Qatar, Saudi Arabia and the UAE joined the bandwagon, the Modi regime fell into an abysmal crisis as Vice President Venkaiah Naidu was in Doha, Qatar, during his nine-nation tour to bolster trade and commerce with India. Moreover, these Gulf countries are crucial not just for the Indian economy but also for the BJP, as its principal donors, Gautam Adani and Mukesh Ambani, have several business interests in the Gulf. Unless these monarchies were appeased, India knew its trade and the interests of these capitalists could suffer.

Thus, while carefully treading a treacherous course, though the BJP suspended Nupur Sharma and expelled Navin Jindal, no legal action was taken against them for hurting the Muslim community’s sentiments to ensure the BJP’s core constituency was not enraged. Instead, the Hindutva fascist Rashtriya Swayamsevak Sangh (RSS) affiliated organisations started vigorously defending the duo to release the pressure from the BJP. The BJP retreated organisationally, but its state governments, especially in Uttar Pradesh, led by Hindutva fascist rabble-rouser Yogi Adityanath, unleashed macabre atrocities on the Muslims who protested Nupur Sharma’s jibes against Muhammad the Prophet on June 3rd and June 10th.

While the MEA was negating Sharma and Jindal as “fringe” elements, and the BJP was swearing by secular values to douse the diplomatic fire, Muslim teens were killed in Jharkhand’s capital Ranchi by the police who opened fire at a Muslim protest rally on Friday, June 10th. Yogi’s regime not only brutally thrashed the protesters on the streets and inside police lockups, exhibiting how the police state can dehumanise Muslims, but it also extra-judicially demolished the houses of the accused and their associates without any court order. Through such blatant violations of human rights, Yogi titillated his support base.

India hit back at the Organisation of Islamic Cooperation (OIC) after it denounced the derogatory remarks by Sharma against Muhammad the Prophet by accusing it of pursuing a “divisive agenda”. However, the MEA continuously tried to pacify countries like Qatar, Saudi Arabia and the UAE. The Modi regime wasn’t bothered by the concerns these governments raised over the derogatory remarks regarding Muhammad the Prophet; instead, it has been busy securing the interests of Adani and Ambani in these countries. One must see the Modi regime’s economic compulsions that forced it to mellow down on the Prophet Muhammad controversy.

The controversy sparked during Vice President Naidu’s official trip to Qatar. Soltan bin Saad al-Muraikhi, the Qatari Minister of State for Foreign Affairs, conveyed his government’s disappointment to Deepak Mittal, the Indian Ambassador. There was outrage in Kuwait, Saudi Arabia and the UAE also. Even India’s traditional ally Iran opposed Sharma’s derogatory remarks. There were calls to boycott Indian products in the Gulf countries as well. This forced the Modi regime to take cosmetic corrective actions to ensure that the trade and commerce with the Gulf, inward foreign remittances and the two-way investments of Adani and Ambani weren’t affected.

Regarding trade, the Gulf region and Iran are crucial for India. The UAE was India’s third-largest trade partner in the financial year (FY 2021-22). The bilateral trade volume between India and the UAE increased to $72.9bn in FY 2021-22 vis-à-vis $43.3 in the pandemic-hit FY 2020-21. According to the government’s data, the UAE’s total investment in India is estimated at around $17bn to $18bn, out of which $11.67bn is in the form of foreign direct investment and the rest is in the form of portfolio investments. Indian investments in the UAE are estimated to be around $85bn.

More than half of the 32m non-resident Indians live in the Gulf countries. Earlier, in 2016, Modi had invited the businesses of Qatar, where 630,000 Indians worked before the pandemic, to invest in India. There has been a large amount of inbound capital from the Gulf countries to India. Following Modi’s grand hospitality to controversial Saudi crown prince Mohammad bin Salman, the Saudi Arabian money has been flowing abundantly into the trades of Modi’s patrons like Ambani. Over 30 companies from Saudi Arabia and the UAE will invest over Rs 30bn in Jammu & Kashmir alone.

The Qatar Investment Authority (QIA) signed a deal with Adani Transmission Limited (ATL) and Adani Electricity Mumbai Limited (AEML) in 2019 to invest Rs 32bn for 25.1% stakes in AEML. In April 2022, Abu Dhabi’s International Holding Company PJSC declared that it would invest $2bn as primary capital in three of Adani’s portfolio companies – Adani Green Energy Ltd, ATL and Adani Enterprises Ltd. Apart from these, the Adani conglomerate has several business interests in the entire Middle East Asia. Adani’s involvement in these Muslim-majority countries has also made his capital vulnerable in case an anti-India sentiment rises over Sharma’s remarks.

How did the controversy over Muhammad the Prophet end for India?

While many armchair activists, passive Opposition members and the members of the oppressed Muslim community welcomed the criticism of the Gulf countries, which forced the BJP to suspend Sharma and expel Jindal, in the bigger context, it’s the Hindutva fascist camp that has gained immensely from the entire controversy. Although the furore of the Gulf countries has subsided through India’s diplomatic manoeuvres, the anger didn’t simmer in India, and the Muslims still demand punitive action against Sharma for her remarks against Muhammad the Prophet. While the BJP limits the “punishment” within the ambit of suspension, a storm is rising.

The Gulf countries that were agitated when Sharma’s remarks against Muhammad the Prophet became public remained nonchalant when the Rohingya genocide took place in Myanmar when Muslims faced structural violence in India due to their identity when the Muslims’ rights were trampled upon. They were dehumanised through the RSS’s pogroms. These monarchies—especially in Saudi Arabia, where the poor Muslim women workers from Bangladesh are raped by their employers, and the labourers from South Asia aren’t treated with dignity—won’t stand with the sufferings of the Muslims of India and elsewhere as trade and investments matter more to them.

However, the Gulf countries’ outrage against Sharma’s remark on Muhammad the Prophet, especially the outrage in Pakistan over the issue, helped the RSS drive home a point that the founder of Hindutva ideology—Vinayak D Savarkar—had propagated a century ago during the Khilafat Movement. Highlighting the fact that the Muslim community has a global union, the RSS continues to hype its “Hindus under threat” narrative to polarise the lower-caste Hindus and ostracised Dalits under the upper-caste elites’ leadership. Using the Muslim community’s sensitivities regarding Muhammad the Prophet, the RSS will continue unofficially abusing him to instigate the community.

As the Muslims have an uncritical approach towards Muhammad the Prophet and can’t tolerate his criticism, they can be easily provoked by the RSS using derogatory comments. One more derogatory remark and the Muslims will react in the predicted manner. While this will prolong the commotion, the RSS will be able to sell its “blasphemy law” in the guise of protecting “Islam’s honour”. If such a law, which will ban criticism of religious figures, relics and symbols, is passed in India, it will be a final nail in the coffin of free speech. It will gag those fighting Hindutva fascism.

This ongoing fiasco will help the Modi regime stimulate its supporters with the optics of state violence against the Muslims; it will also allow the anti-worker Labour Codes to be implemented without any active resistance from July 2022. It will enable the Modi regime to conduct the National Population Register (NPR) exercise from September 2022, which will help create the National Register of Indian Citizens (NRC). The NRC will disenfranchise millions of indigenous people, especially Dalits and tribal people. Unless democratic and progressive forces actively resist the Modi regime’s ulterior motives, India’s future will be doomed.